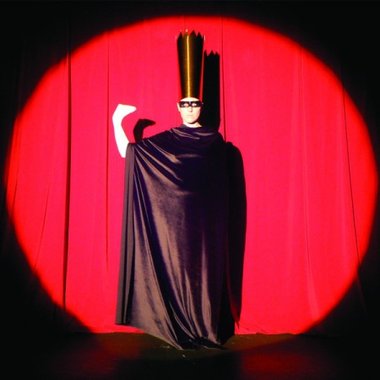 Over the four days of the festival I attended some twenty events, ranging from intimate engagements to more traditional theatre settings, performative lectures to public interventions; a contemporary variety show. I am not suggesting that the type of work showcased differed significantly to what we might see here in New Zealand, but the grouping together of these performances into a festival that was designed to be spectacular and overwhelming seemed at once distasteful and thrilling.

Although one of my fondest art memories is of Peter Roche recklessly swinging a chainsaw round the room as the assembled audience cowered against the walls, ‘live art’ is not a term we commonly use to describe contemporary practices in New Zealand. I was intrigued then, by what Performance Space in Sydney would present for Liveworks: A fast and furious festival of new ideas.

Over the four days I attended some twenty events, ranging from intimate engagements to more traditional theatre settings, performative lectures to public interventions; a contemporary variety show. I am not suggesting that the type of work showcased differed significantly to what we might see here in New Zealand - similar to the recent Everything is okay Stab commission in Wellington or the performances of Raised by Wolves - but the grouping together of these performances into a festival that was designed to be spectacular and overwhelming seemed at once distasteful and thrilling.

Perhaps it comes from having organisations like Performance Space dedicated to facilitating interdisciplinary artforms. Maybe we are more reserved in general, more attuned to art history, or it could be a hangover from previous education and funding models, but the idea of creating an interdisciplinary arts festival with an atmosphere akin to bunting and balloons goes against the grain of our more focussed approach to theatre, performance, dance and the visual arts, where each is kept at arms length despite the flexibility within some practices.

Programming such a range of works into a festival format instead of an exhibition ensured that each was appreciated as live performance, avoiding any expectation to present documentation or another form of outcome. Artists addressed common topics, such as identity, representation, gender, displacement and storytelling, but as live media was the connecting thread these stimulated discussion on performance and participation across a broad cross-section of ideas. Many projects also had an element of improvisation or were still under development, ensuring they retained the vitality of a work-in-progress. All this made for a varied and dynamic series of events.

A private appointment was necessary to experience the work of The Vorticist, Jason Maling. As his title implies, this was a mystical ritualised process and was conducted in a secluded shrine-like space. Each meeting involved the erasure of a drawing that Maling had made during an earlier conversation, as a way to develop and reinterpret his archive of stories, and resulted in ribbons of intermittently blank white-out tapes, remnants of what was revealed by a participant and what remained unsaid. Given the intimacy of the situation, it bordered on psychoanalytic therapy as much as art and elicited emotional responses from each audience member specific to the personalised interaction-risky for artist and visitor alike.

David Cross‘s Hold involved an anonymous participatory experience that utilised a physically challenging environment to reveal the trust and responsibility inherent to our personal and collective relationships. Most times it led to a rather touching exchange, but it also reflected our inability to always function as a community in that participants sometimes fell, left without completing the task or failed to determine the significance of their actions.

Performative lectures featured strongly in the programme, playing with our love for passively absorbing information, subverting and heightening awareness of the controls implicit within society. However Brown Council’s critically insightful A Comedy was a highlight of the festival. Over four hours, this collective of four women invited the audience to select from five comedy routines that they then enacted. Each magic trick, monkey dance, stand-up, slap stick and cream pie sketch over-identified with the characteristics of comedy: funny until the sinister and ugly foundations of humour were made overt, incriminating the audience through a sickly aftertaste that left them questioning just why it was they were still laughing.

Also taking self-reflexive participation to new levels, Thrashing Without Looking (Martyn Coutts, Tristan Meecham, Lara Thoms and Willoh S. Weiland) was an innovative mix of live performance and cinema. Participants were encased within headsets so that all vision was mediated by a camera, fed back onto small screens in front of their eyes, as audience and performers drank champagne together, played ping pong and slow danced.

Viewing a disembodied self that was at once being watched and watching, was wildly disorientating and blurred the distinction between reality and image. Maybe we are too accustomed to the reverse activity, looking without thrashing? In spurning the brashness that Sydney is renowned for, perhaps we are missing out on the opportunity to let loose and live a little, to chance a look at life through live art.