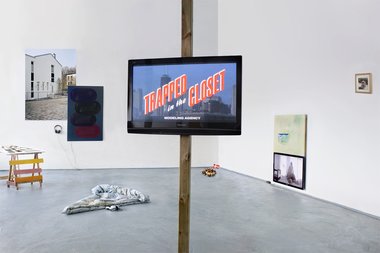 As a ‘modeling agency', curators Reynolds and Høm could be said to be appropriating existing works from the ten artists to fashion new configurations, collaborations - executing new works altogether in some cases; deliberately complicating what divides and defines artistic and curatorial production.

Upon entering the gallery, the viewer is greeted by a flatscreen television installed at eye-level, propped by a single floor-to-ceiling 2 by 4. On screen from the hip-hopera, is R Kelly’s Trapped In The Closet (2005) with the curatorial statement appearing as running subtitles throughout the looped clip. Like a corporate reception area, this initial encounter sets up the framing (one is inclined to say ‘the branding’) and curatorial premise of this show.

As a ‘modeling agency’, curators Reynolds and Høm could be said to be appropriating existing works from the ten artists to fashion new configurations, collaborations - executing new works altogether in some cases; deliberately complicating what divides and defines artistic and curatorial production. (Given these terms, it seems futile to attribute authorship to any single artist but for the purpose of this review, I will still refer to works via their ‘original’ makers - with the understanding that they have been subjected to the curators’ meddling hands to varying degrees.)

To the right of the room, on the wall, hangs a small square framed photograph of a hand resting on a windowsill holding a can of Coke. On the hand, the focused neat hand-writing reads: “References are like a civil code: they count even if you don’t know them.” Lifted from a text by Christophe Bruckner, the show’s self-reference is delivered here with an unexpected lightness given the implied curatorial ‘corruption’ at play. This shows up more sharply in Philipp Timischl’s pairing of a painting rested atop a flatscreen of near-identical dimensions, installed low on the wall, showing a series of slow-moving pans of an Ikea-esque bedroom.

Moving from bedroom to bedding, Michele Pagel’s triangular-shaped marshmallowy baby-blue bedspread on the floor presents a visual equivalent of the pleasures of diving headfirst into a feather duvet. Attached to the blanket are glazed ceramic versions of würstel paper plates with requisite leftover smears of ketchup and mustard. When I spoke to Pagel on opening night, she told me that the piece was made with the intention of being offered up for appropriation, to be re-purposed by the homeless in Vienna.

Among the plates on El Calzone (2011), is a small LCD screen showing a documentary of Pagel describing her own work. Filmed in front of Carravagios, amongst the cultural grandeur of a Viennese art museum, Pagel comes across like a breathless museum-guide enthusing about a grade-school project. Mic in one hand, she holds up and guides us through a painting of herself as a shopping mall, explains the inclusion of Italian cockroach poison in her scale model of an imagined museum tower with equal measures of madcap and genius, delivered with an unaffected sincerity. If we were to drag out the sexual metaphors, this is hands down the work I would want to go to bed with.

Another strong component is the thoughtful wall arrangement of Nora Kapfer’s photograph of a modernist home, slightly overlapped with Aliksandr Marchuk’s disciplined constructivist painting accompanied by an audio excerpt from Woody Allen’s Midnight in Paris (2011). With shared allusions to the thrust of early 20th century European modernism, the composition draws a visual path between the patch of exposed brick wall that lines up with the driveway in the photograph to the gravity of Marchuk’s painterly board-game track.

Diagonally across the room from the Trapped in the Closet introduction, Modeling Agency again comes to the fore with a DIS magazine-style display menu laid out on a trestle table, illustrating the works as originally presented and providing a sense of the wide, disparate range of pan-cultural material Høm and Reynolds have taken care to meddle and model in the show. The table itself partially rests on Björn Westphal’s painted wooden assemblage support, functioning as a humble albeit useful prop in this instance.

There is a consistent quality of thin-ness, a knowing Post-Fordist savvy employed throughout the exhibition - from the opening night spectacles courtesy of performance artist Salvatore Viviano and art opening attendant extraordinaire Kris Lemsalu to the exhibition poster featuring Reynolds and Høm as self-styled elegant young entrepreneurs; it draws on the wonder of everything in the candy store being at our disposal but avoids the easy slide into a kind of laugh-along nihilism. It is to the curators’ credit that they have treated their ‘contributions’ here with measured restraint and sensitivity (though Timischl might beg to differ) while managing to make mischief and have fun in this smart, thoroughly enjoyable exhibition.