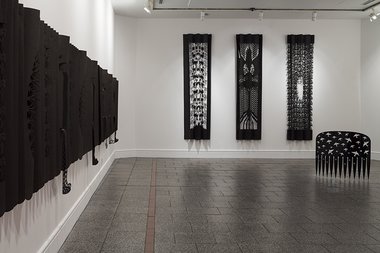 It is intriguing that the mythologies laid out by Pacific ancestors and a colonised New Zealand, are equally criticised. What I find most interesting is the consistency of historical relevance. The conversations brought about through her work were first raised when Hutchinson debuted as an artist in the 90s and those same conversations remain relevant in 2015.

What is the purpose of re-exhibiting an artist’s production en-masse? Retrospectives represent working within a notably difficult and unstable industry for a sustained period of time, usually with some level of success. They tell of an artist’s commercial appeal and how valuable said artist’s work is to the gallery and their allocation of storage; even more a display of an artist’s legacy.

At a stretch, such surveys are a decent enough reason for mild patriotism. I have forgotten though, the one vital function of the retrospective, which is to display and pay homage to the historical and chronological progression of the works. This is the device used for Hutchinson’s work, which is indeed historically significant and valuable.

Black Bird: Lonnie Hutchinson 1997-2013: A Survey, curated by Linda Tyler, examines Hutchinson’s career in detail, albeit reduced spatially to the two galleries and foyer space of Gus Fisher Gallery. From video interviews with family members to large scale paper cutouts that cast shadows of repeated motifs, Hutchinson has accumulated a mass of varied resolutions, all of which speak to deeply personal themes.

The first work I see, visible from Shortland Street, is the restaged performance of Can You See Me (1997/2015). Two young artists Darcell Apelu and Amiria Puia-Taylor are seated on the entrance steps, restricted and held down by brown packing tape. Can You See Me (1997/2015) portrays the current and historical struggle of the Pacific woman - both in the Western colonised world to avoid fetishisation and in the Pacific world to be heard and legitimised against patriarchal favouritism. Although quite literal, it still holds power in a contemporary setting. The inclusion of emerging artists Apelu and Puia-Taylor in this restaging is compelling in itself. The connection between Hutchinson and artists from this generation highlights an endearing mentor and protégé type relationship.

When walking into the Gus Fisher Gallery’s foyer, I am immediately confronted by Lolelole (2003/2015). The piece is not visible upon entrance but exudes an overwhelmingly sugary, nostalgic scent. Lole lole is jovial and exciting. Hundreds of gelatinous, artificially flavoured and coloured lollies, specifically jet planes, are arranged and pinned in unison on a stark white wall to create a much larger jet plane. The jet plane, arguably a national icon, perhaps makes an allegory to the colonial history of New Zealand and the Pacific Islands.

Lolelole reminds me of Michel Tuffery’s Pisupo lua afe (Corned beef), 2000, an accumulation of tinned corned beef tins that merge to form the body of a cow. Both Pisupo lua afe, and Lolelole use the idea of a repeated motif through a foreign food, laden with the artificial and low in nutritional value. Jet planes also referring to the actual migration of food, specifically sugar. Hutchinson’s work pointing to the exploitative nature of economic politics between European settlers and Pacific Islanders/New Zealand The empty gesture of exchanging preservative based tinned foods in exchange for a self-sustainable market of fresh fish indeed represents an unfair trade.

This is what I get from Black Bird - that the viewer is definitely confronted. Its quantity seems to be significant, for there is a lot to decipher in a relatively small area. In saying that, most works are related to one another contextually.

Back in Gallery One, Hutchinson’s Comb (2009), in its black manifestation, is displayed freestanding amongst intricate builder’s paper cut-out series such as Milk and Honey (2012). While Comb, however, is overshadowed by the pillar-like Milk and Honey, it paradoxically is more conspicuous through its smaller stature. The ornate comb, magnified, addresses a specifically Pacific female audience, decorated with an embedded stylised image of a naked woman in a compromising position. Although quite current, it was ten years in the making. In Can You See Me, the Polynesian woman is restrained but in Comb, Hutchinson addresses the Polynesian woman as a sexual object and presents her with a voice.

Hutchinson’s corpus of works refers to gender, cultural and sexual politics, whilst also acknowledging the tradition of Sāmoan and Māori mythology and spirituality. It is intriguing that the mythologies laid out by Pacific ancestors and a colonised New Zealand are equally criticised. What I find most interesting is the consistency of historical relevance. The conversations brought about through her work were first raised when Hutchinson debuted as an artist in the 90s and those same conversations remain relevant in 2015. Black Bird is an impressively large array of artworks from a trailblazing Pacific female artist, who has no doubt made it possible for emerging Pacific artists to have a confident and prominent voice in a Western dominated art market.