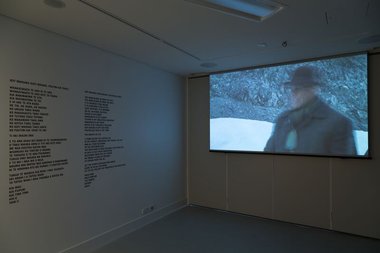 Some might question what place an artist who is not from New Zealand has within this process - such a question would be remiss. By placing Mahuika at the heart of the film, and casting herself in the silent role of one who bears witness, Huber gives voice to the perspective she believes has been ignored. More than this though, it is within this international context that her work gains depth.

Sasha Huber
Agassiz Down Under

“A glacier by any other name…”

What’s in a name? Sasha Huber‘s work confronts us with this apparently innocuous question, and forces a re-imagining of the geologically familiar. The works on show in Te Whare Hēra may be the physical manifestation of Huber’s residency in Wellington, but they also represent a step within an international creative journey for the artist, forming part of her contribution to a wider project entitled “Demounting Louis Agassiz”. A nineteenth century geologist, Louis Agassiz was a prolific proponent of racial segregation, widely considered “one of the 19th century’s most influential racists.”(1) In 1865 his name was attached to two geological sites in New Zealand by Franz Julius von Haast. It is one of these landmarks - Agassiz Glacier, located on the South Island’s West Coast - that acted as the ground from which Huber would demount the name, and legacy, of Agassiz in New Zealand.

Stepping into the small wedge-shaped space of the Te Whare Hēra gallery is a geographically transformative experience. Tucked into the prow end of the new Clyde Quay Wharf development, our view as we approach is dominated by the ocean and hills of the Wellington harbour. Upon crossing the threshold though, we leave the urban environment behind us. Curtains have been drawn over the ceiling-height windows and glass door, the prominence of a projected film making the practical reasoning behind this obvious. However, it is the geographical insulation enacted by the simple blocking of a familiar view which is symbolically effective here. The terrain Huber has mapped for us in place of that view lies at the centre of her project in New Zealand.

Playing continuously on the widest end wall of the gallery is a 4:30 minute film entitled KARAKIA The Resetting Ceremony (2015); its subject a karakia, performed by Jeff Mahuika (Kāti Māhaki, Poutini KāI Tahu) whilst accompanied by Huber. It was this karakia which acted to “symbolically un-name and “cleanse” the glacier of its association with Agassiz.”(2) The film begins by establishing the glacier as a physical location, with extended shots of the landscape surrounding it. As each image slowly fades into the next, the gallery is filled with the sound of the wind, at once desolate and familiar. Into this environment walk the figures of Mahuika and Huber, crampons helping them to pick their way across the ice pack, each dressed in clothes that give an appearance of timelessness. As the karakia begins, the camera’s focus crops in upon them, their figures framed only by the blue tinged ancient ice of the glacier. Mahuika’s face is active and impassioned as he recites the karakia, which we can follow if we choose in either English or Māori, transcribed on the gallery wall. Mahuika is so inherently watchable though, that it is more inviting to watch and listen, without recourse to translation.

As we begin to mentally unravel Huber’s critical unpicking of the act of naming, it becomes clear that what is under attack here is a colonial naming process which can be identified as an attempt to “solidly locate New Zealand within white European culture while at the same time ignoring the Māori perspective.”(3) Some might question what place an artist who is not from New Zealand has within this process - such a question would be remiss. By placing Mahuika at the heart of the film, and casting herself in the silent role of one who bears witness, Huber gives voice to the perspective she believes has been ignored. More than this though, it is within this international context that her work gains depth. If we value the role to be played by the establishment of an International Artist’s Residency, then Agassiz Down Under seems to express the breadth of this international engagement. The work may be specifically of New Zealand, yet it simultaneously places our locality within a wider global context, allowing the artist to tell a larger story than that of any individual landmark.

The sense of the global relevance of a project of un-naming is echoed in the series of four photographs exhibited alongside the film. Entitled Agassiz: The Mixed Traces Series: Somatological Triptych of Sasha Huber (2010-2015) these photographs, depict landscapes in Brazil, Switzerland, Scotland and New Zealand are unified by two commonalities: each is dominated by a geological feature named after Agassiz, and each contain a triptych depiction of the naked artist, each taken by a different photographer. Initially these images seem troubling in their confrontational nature. Huber’s face is blank and impassive as she is repeatedly depicted in three neutral standing positions, divorced aesthetically and thematically from the landscape in which she is depicted. However, an awareness of the inspiration for these photographic portraits elevates the images to a place within the wider discourse surrounding the problematic nature of naming.

Throughout his career, Agassiz commissioned many photographs of African slaves and “used these photographs to ‘prove’ the inferiority of the black race and presented those photographs in his lectures.”(4) This ethnographic cataloguing of races through apparently objective documentary imagery shed its credibility long ago. However, the very fact that such photographs were considered documents of scientific enquiry in historically recent terms, demonstrates the successful narrative that has been constructed in an attempt to naturalise tools of social oppression such as racism.

At their heart, Huber’s works in this exhibition can be considered performative utterances. Through them she attempts to manifest change through language both spoken and visual. Whilst the performative words spoken through the karakia may have enacted a symbolic un-naming, they continue to work their transformative power on the engaged viewer. The residual trace of these utterances remain as we go out into the world and consider the secret histories which might be hidden beneath names and geographies which once struck us as familiar and neutral.