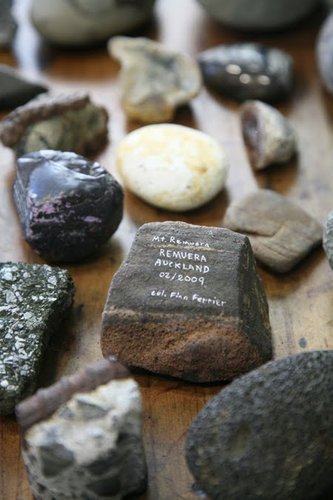 Ferrier’s peculiar jokes, besides generating an initial gut-level response of laughter, can also be a quieter meditation on the nature of collecting as a compulsive drive – a magpielike, driven action of reflex that demonstrates the constant need to pick things up while moving around a city.

Though Finn Ferrier in his art works tends to present himself as an earnestly zealous rock hound/archaeologist there is a lovely gentle humour throughout this installation in Window, adjacent to the Auckland University Library foyer entrance. While he as avid collector seems to like to obsess over the origin, movement and use of quarried mineral types around the Auckland region, assiduously labelling for his own museum in tiny white print the original location and time of finding for each geological sample, he also loves to mix into his table top display unexpectedly ludicrous ingredients.

These include a ‘rock candy’ sugar stick, a packet of yellow ‘river rocks’ – coloured gravel for aquaria, a ‘rock key holder’ still unopened, thermal mud soap, and packets of ‘collectable’ rocks for junior learners. Plus pieces of broken orange indicator-light glass, metal bottle tops, bits of wooden post, bits of coloured soft chalk, chunks of pebble encrusted tar, slices of concrete pipe – even a stone with a broken match on top of it, both securely wrapped in Gladwrap. There is also a sign, written in grey stones, expressing some homespun, optimistic folk philosophy.

Ferrier’s peculiar jokes, besides generating an initial gut-level response of laughter, can also be a quieter meditation on the nature of collecting as a compulsive drive – a magpielike, driven action of reflex that demonstrates the constant need to pick things up while moving around a city.

His wooden table is flanked by two spiky pot plants, while on the floor are several open flat wooden boxes crammed with match boxes bearing more smaller samples. The trays raise questions of classification, of how Ferrier stores and orders these samples – sorting them through place of origin, or place found, geological type, time when picked up, colour, texture, or functional use maybe.

Window here is turned into an amateur science and history museum, an outpost you might find in a small remote township, a rural display with no fancy technological gizmos, just sorted artefacts or natural objects. Something unexpected that sparks off your curiosity - that gets you to start making connections.