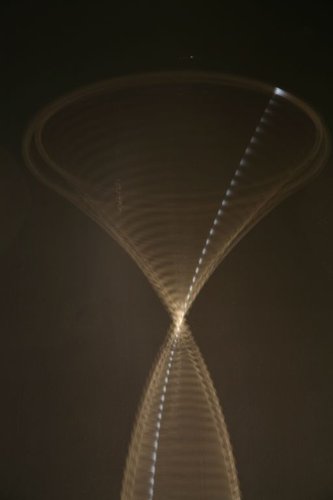 The fascinating thing about Lye is his conceptual cohesion, how his various intellectual obsessions, while seemingly disparate, actually make up a tight package of research - the theory for his assorted, very manual, art-making approaches and their bodily focus.

It is almost exactly thirty years since Andrew Bogle curated the very first major survey of Len Lye work in this country – for Auckland City Art Gallery, and it is astounding it has taken so long for an updated version to return to this city. In the interim a lot has happened. There have been many remarkable kinetic sculptures posthumously created by the Len Lye Foundation, new films discovered overseas, and new photographic works and poetic texts dug out of the archives kept in New Plymouth’s Govett-Brewster. And considering the small size of the Gus Fisher compared to the New Gallery, this necessarily modest selection made by Roger Horrocks is suitably varied. It looks amazing good.

The reason for Horrocks’ assembling of this small but condensed survey is to provide a palpable public context for two new books on Lye he is launching. He is already well-known as the author of a superb Lye biography (Len Lye, 2001), and the co-editor (with Wystan Curnow) of a wonderful collection of Lye’s writings (Figures of Motion, 1984). Horrocks has also edited two books of Lye’s drawings and writings for Holloway Press – is now launching the second - and very recently he and his wife Shirley made a film, Art That Moves. Some of Lye’s theories mentioned in the film Horrocks elaborates on in his new AUP book of the same name, particularly the notion of muscular empathy: how our bodies can involuntarily respond to movement we observe in nature (like swaying trees), art (dance or kinetic sculpture), or sport.

With this point in mind, it is especially exciting in this exhibition to see two posthumous, recently recreated Lye kinetic sculptures, Fire Bush and Zebra. Because of the small size of the venue it would not be possible to show the famous and extremely noisy works like Trilogy or Blade, but these ‘new’ works – set to timers as all the metal sculptures are – have real presence. Fire Bush is like a small version of Fountain with its cluster of delicate sprouting rods, but instead of revolving it is orchestrated to shake – in an increasingly frenetic fashion. Zebra is a twirling rod, painted in black and white bands, that moves at different speeds and also with subtly different sorts of trajectory at its base - in order to generate different sorts of what Lye called ‘harmonics’. Like the manically wobbling flat strip, Blade, Zebra in its movement goes through different stages where the blurry, solo vertical form splits into two and then three stacked swelling sections. Blade though is ferociously wild and untameable, but Zebra is gracious and friendly – a delicate, pirouetting, bending needle.

So in this show there are five kinetic sculptures, two large paintings, four films, four photogram portraits made with light-sensitive paper and no cameras, and in one vitrine, an intriguing sequence of a dozen abstract ‘doodles’ that look like story-boards for a scratch film or perhaps the choreographed movement of a suite of sculptures.

There is also some supporting material in the form of scribing tools, stencils, combs etc., that are good for the non-initiated perhaps, but not actual artworks. Maybe other Lye items (like his gorgeous book covers) would have been better.

The fascinating thing about Lye is his conceptual cohesion, how his various intellectual obsessions, while seemingly disparate, actually make up a tight package of research - the theory for his assorted, very manual, art-making approaches and their bodily focus.

The other interesting aspect is his espousal of art–making as a pleasurable process, involving trial and error with materials with properties that excite you emotionally; that thinking is non-dualistic, about curiosity and imaginative (but visceral) hunches you can’t quite explain, engaging the world with your whole body.

This show is a rare opportunity for Aucklanders to catch up on what many New Plymouthites now take for granted in their gallery visits. A Christmas treat.