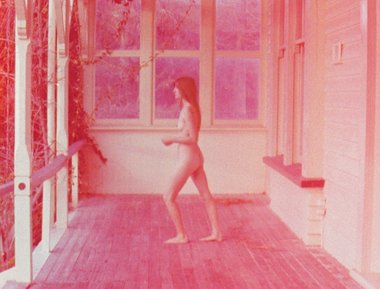 However Menzies does say she wants her audience to consider the importance of exercise-movements and their connection to 'the physical, the mental and the spiritual'. Yet the soft light, art historical references, eroticism and movement are also of interest too – perhaps even more than the discussions of medical history mentioned in her blurbs.

The set up is the simplest I’ve ever seen at Gambia Castle: a projector on a stand in the main room with a 16 mm film. The person in the office comes out when you arrive and switches it on. It runs for about four minutes, with no sound. Easy-peasy. They then rewind the film when you leave.

Louise Menzies is normally known for performances that focus on social history and community, but now she is making films. This one shows a young woman in her early twenties, standing naked on the veranda of an old villa doing exercises related to body posture and limb manipulation: stretches and bends. The house, called Peloha (a compression of ‘peace, love, harmony’) is located in Havelock North, and in the late 1930s it was the international headquarters for the then highly influential and radical School of Radiant Living, founded by the charismatic Herbert Sutcliffe.

In the eighties a related company that specialises in homeopathic medicines, Weleda New Zealand, took over the property when the S.R.L. slowly fell out of favour and eventually collapsed. To enrich the film’s context, the Wellington writer Anna Sanderson has written a short text mainly about the current inhabitant of the Peloha house, Phillip Melville. She used a photograph Menzies took of assorted crystals, Peloha photographs, Renaissance art reproductions and a cloth elephant on the original Peloha mantelpiece, and quotes from an interview Louise Menzies did with Melville.

So what of Menzies’ film? Well, it is fascinating for a number of reasons.

First of all the soft yellowy-green light which seems to be that of a late spring afternoon. With the young woman the film has a gentle eroticism akin to that of Balthus(1908-2001), the Polish-French painter, but not salacious (or demonic) as he can sometimes be. She is vertical, poised and confident, and mostly in profile. Formally positioned in the centre of the screen, she is enclosed by the house wall, screen windows and balustrade of the porch. She is also androgynous, having small breasts and large shoulders. She could be a guy.

It is not only the presence of an unclothed young woman that brings Balthus to mind. As a painter he was on occasion very influenced by Quattrocento painters like Piero Della Francesco and Massacio, and Menzies’ film has a similarly thin, scrubbed light like that of a faded fresco. The figure, oddly enough, could also be a fighting warrior in a battle engraving by Pollaiolo.

Although Peloha is a film about the history of healthy body maintenance, due to the movement of the exercises it seems to be presenting a variety of contemporary dance, and in that way is quite hypnotic. Because it is screened from a centrally positioned projector on to the side wall of the gallery, the motion of the projector reels become a surrogate for another observing, but mentally energetic, human form.

My impression from her publicity though is that Menzies intends her film to be noticed for other, more social history-focussed reasons – namely that the house is a reference to certain international movements of the thirties and forties that eventually grew out of the much earlier American-based New Thought movement and other concepts developed by Phineas Parkhurst Quimby (1802-1866), and that the exercises came indirectly from pioneer reseachers like Bess Mesendieck (1864 -1958) and others.

In other words, she is excited by certain antecedents, various precursors who developed various medical concepts that many take for granted nowadays. These she has inserted as footnotes to her film – referenced through the exhibition’s flier and through Sanderson’s short, published article. However, there is no stated link between the film’s location and the young woman’s regime of exercises, but it is implied that they come from the School of Radiant Living. We don’t know for sure.

However Menzies does say she wants her audience to consider the importance of exercise-movements and their connection to ‘the physical, the mental and the spiritual’. Yet the soft light, art historical references, eroticism and movement are also of interest too – perhaps even more than the discussions of medical history mentioned in her blurbs. Whatever the case, this is a richly layered, immensely intriguing short film. As an exhibition, one of Gambia’s best.