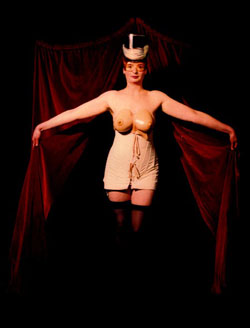 …the work suddenly becomes formulaic and repetitive: models, performers and art worlders posed stiffly in tableaux vivant, flashing their pink bits like they've just been mugged by a tag team of Donna Demente and Trelise Cooper, and plunged into a Caravaggio-inspired chiaroscuro.

No one could deny that the time for a Christine Webster survey and reconsideration is well and truly due - though just as one shouldn’t presume that David Bain’s acquittal equates with innocence, one shouldn’t automatically think that a big survey sets a reputation in stone. One of the difficulties in assessing the overall effect is that because in the successive decades her tropes and influences have become very familiar through the work of other artists and popular culture, and this must be taken into account when assessing Webster’s position in New Zealand (and Australian) art history.

There has, for instance, been a revival of burlesque performance, Mikhail Bakhtin’s notion of the Carnivalesque has become widely familiar, plastic breasts tend to make us think of Cindy Sherman, feather boas and recherché historicism have returned to fashion design and the World of Wearable Art. There are echoes of Pierre et Gilles, Cocteau and others - even Picasso. Does subversive voyeuristic and fetishistic eroticism really have any currency in a world that since the 1980s has quite honestly seen everything? In fact, we really must struggle to distance ourselves from the expectations of a mass of intervening culture in order to give Webster’s body of work its impartial worth, without larding it with second wave feminist and French post-structuralist theory.

Visually the photographic prints are not as shocking to us as they once were, and a younger audience is unlikely to experience any of the frisson the works once held, especially when the art world was smaller and the models were frequently known to us socially. Indeed, the Black Carnival aesthetic in particular has become the commonplace of advertising and marketing. But this gives us greater opportunity to interrogate the images unfettered by novelty and prurience.

For me, some of the most interesting work is the earliest in the show, Albert Park (1983) and the self-portrait Devouring a Persimmon in the Back Yard (1985) with their energy and expressive camera distortions. Also of this period is Craigwell House where the artifice starts creeping in - a made up ephebe, pretty in a tawdry way, emerging from what looks like the (yellowed and cracked) tiled plunge pool of a disused hospital. The light is the rich amber of electrical light, reminiscent of Fassbinder’s film Querelle. There is a sort of Ovidian beauty to this - an inverted Narcissus picked up on a street corner or low rent Hylas abducted by the nymphs.

Then we hit the middle period, the best known series: Black Carnival, Possession and Mirth, Circus of Angels, all the way through to Serious Dolls House. I want to like them, but I can’t work up the enthusiasm. Firstly, the work suddenly becomes formulaic and repetitive: models, performers and art worlders posed stiffly in tableaux vivant, flashing their pink bits like they’ve just been mugged by a tag team of Donna Demente and Trelise Cooper, and plunged into a Caravaggio-inspired chiaroscuro. Secondly this sameness lingers on for far too long, literally decades, with only minor variations.

Possession and Mirth from the early 1990s, represented here by Vein (1992), takes up the trope drawing on historical paintings and subverting the details. Vein, for instance, would appear to be based on seventeenth century Italian painter (and one of the few women) Artemisia Gentileschi’s Judith and Holofernes (itself in the typical chiaroscuro of the Caravaggisti - the followers of Caravaggio). But again, comparisons with Cindy Sherman are unavoidable as she also exploited the idea (as did many, many other contemporary photographers). Without wall labels it would be difficult to determine which series individual works would belong to, and the lack of any hard edge or realism (here I’m thinking of milder Mapplethorpe) leaves me feeling ambivalent about the image.

It’s a bit like a sandwich that you’ve put so many condiments in that you don’t notice that the meat or cheese or whatever has fallen out, and then all those ingredients give you indigestion. I am not convinced that the middle period rises to an exceptional point above the international average, however in a local context it shook things up enough to spin a number of new directions in New Zealand art - for which Webster earns her laurels. With time and a greater public jadedness, some of the lustre has been lost, but we must place things in context; something that this exhibition should have tackled more directly in the gallery space.

At the far end of the exhibition, the most recent work, things become interesting for me again - although to say that the Quiet series with its fluffy textiles counterpointed in diptych with sweaty male close-ups “addresses masculinity in a way that is counter to that promoted by media representation” (quoted from the wall text) is to suggest that someone has spent the last twenty years in a cave on Mars with their fingers in their ears and their eyes closed. Possibly this might be true if there was a harder, more shocking edge, but the reality is that particular conceit is well-tilled earth as a glance in most photography magazines will confirm. Doug Inglish and Michael Baumgarten come to mind. I could probably pick up any issue of (not only) blue at random and find something similar.

I am much more interested in the most recent work Le Dossier, a series of modestly sized images of details and nudes that have this underlying Bluebeard/120 Days of Sodom theme of sexual violence against women in a French Chateau. I love a bit of Angela Carter/Marquis de Sade tension, provided it is handled as well as it is here. These are beautifully executed as fantasy, but with that essential connection to the real world and natural light that adds the extra tremble. The images are delicate and lyrical - a full circle reminiscent of those fresh early works. After touring the show, I felt reinvigorated by this pot of gold at the end of a slightly exhausting rainbow.

And there is video work - often the last dance of the desperate for senior photographers, but here interesting, intriguing and occasionally risqué. I would have to say, however, not exceptionally so - one gets the feeling, thought, that this is quite a new medium for La Webster, and she’s still feeling it out, though judging from the credits she is keeping to a directorial role rather than getting behind the camera herself. This will be an interesting area to watch, as Webster is nobody’s fool and will fully develop this new arrow in her quiver.

None of this is to condemn the show, because interesting pieces are scattered throughout and it serves an important didactic purpose. I am left wondering, however, whether Christine Webster’s importance lies more in the precedents she set for younger (and particularly female) artists in this part of the world, rather the work as it stands today. Nonetheless it is a visual dialogue well worth having, and will be especially informative to a younger generation of artists for whom the 1980s especially are another country. This is primarily art history, but I’m itching to see where Webster goes next.

The image is Black Carnival #18 1993. Cibachrome. Collection of the Museum of New Zealand Te Papa Tongarewa. Reproduced courtesy of the artist.