Eve Armstrong at The Physics Room 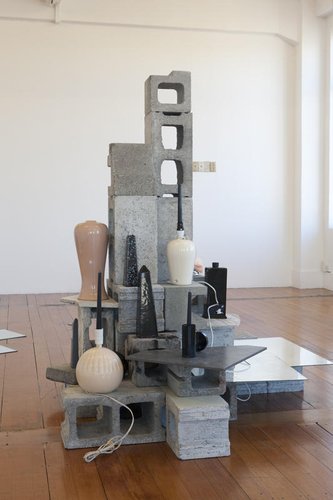 The focus is not on nostalgia, the beautiful, kitsch nor sentimentality, neither does it seek to revise art history. Rather After seeks to redress a new place to stand for artist and audience that metronomes between yearning and anxiety. Armstrong is obviously as aware of the debates within contemporary art as she is of art historical predecessors.

Eve Armstrong’s installation After coherently and holistically fills an entire gallery space, but consists of sub installations which makes for a visually interesting and engaging environment without diluting the web of associations and connections (song lines, ley lines, lines of sight) of meaning or becoming inarticulate. On a basic level it can be read as a Romantic landscape constructed from the found detritus of modern consumer society, seemingly after the apocalypse and in carefully selected shades of pastel pink, grey and black. As with movies like Planet of the Apes and Logan’s Run, it is difficult to guess how future humans might interpret and seek to enshrine the relics of the present, even though After is clearly here and now.

The colours are essential in providing a harmonising and homogenising matrix for all of these objets trouvé. Using colour as the means for the unification of the whole is a clever strategy, remaining true to the minimalist aesthetics of modern consumer goods and avoiding the sensation for the viewer that they are surrounded by a less consciously selected, random or pastiche-seeming clutter - lacking refined meaning and significance. The muted nature of the palette enhances an overall minimalist sensibility that does not distract from the important physical relationships between zones and sub-installations within the gestalt whole. The focus is not on nostalgia, the beautiful, kitsch nor sentimentality, neither does it seek to revise art history. Rather After seeks to redress a new place to stand for artist and audience that metronomes between yearning and anxiety. Armstrong is obviously as aware of the debates within contemporary art as she is of art historical predecessors.

The Romantic spirit which reached its full flowering where the eighteenth century becomes the nineteenth is, I think, key to teasing the intellectual threads of meaning out of the complex fabric of After. Romanticism in art, has in recent years come back in force - one might consider the 2005 survey exhibition Munschwelten: Neue Romantik in der Kunst der Gegenwart (Ideal Worlds: New Romanticism in Contemporary Art) at the Schirn Kunsthalle, Frankfurt am Main. The ‘landscape’ effect is strongly suggested by Outlet; a towering ‘alp’ of concrete blocks studded with electric lamp stands in which candles have been inserted (consider the opposition of technological levels) overlooking Display; a small ‘lake’ constructed on the floor from mirror off-cuts. The classic Romantic landscape is represented at scale and in metaphor, a visually stimulating accumulation of altitudes and voids. Silvered glass and concrete seem as natural as this landscape will get, and yet that also seems to be enough.

Casper David Friedrich-like lone figures in a landscape is intimated in two seats; Vying to return - a bathroom stool upholstered ad hoc with a fluffy pink bath towel seen better days, and de rigueur - an insubstantial tube aluminum chair (picture a cheap collapsible ironing board folded into a chair, ugly and tacky as sin) atop a plinth covered in carpet off-cuts. A third ‘figure in the landscape’ seems to be represented by Bystander - a metal standard lamp stand sans lamp - a skeletal pole rising out of its base, trying to be casual and insouciant in its relationship with the other components. These suggestions of isolated observers, staffage really, are in of themselves quintessentially Romantic with a capital ‘R’.

Unlike the various variations on Classicism, Romanticism does not propagate any absolute set of ideals, but rather sought to create individualised alternate counterworlds through which to escape the violently accelerated tenor of contemporary life. Whereas the Romantics of the nineteenth century tried to find escape in an idealised pastoral fantasy of the past, Armstrong has eliminated the present altogether. The modern world is represented through discarded, obsolete objects aesthetically associated with the 1970s and 1980s (thus aligning the installation with Armstrong’s X-generation youth, the important aesthetic developmental period) as they might be found in the ruins of Western civilisation after some terrible global man-made natural disaster.

At one end of the gallery is Future you - a minimalist shower door mounted monolithically and architecturally atop a sheet of linoleum, the marble pattern of which suggests a sculptural plinth. Leaning against a wall, Passing consists of a glacial wall of glass off-cuts, some of which are slathered with a gestural plain of white acrylic paint. Posted to these are laser prints on newsprint depicting collages of consumer appliance and white goods superimposed on landscapes associated with the Sublime (volcanoes, mountains, geysers) and the Picturesque (forest). These prints (including to the one stuck to the shower door of Future you) represent primers to understanding this alluded to world of capitalist technocrat consumerism, with a historical vision of nature as metaphor for the human world.

The installation grows crystal-like from a ground of culture, dispersed around horizontal and vertical surfaces like something organic, coaxing high drama and a sense of becoming out of the mundane and otherwise static surfaces of the gallery space staged independent of space or time. These are very much interlocking tableaux functioning like an ambient organic machine to evoke deep and unexpected emotional states in the viewer - another trait of Romanticism. There seems to be an innate desire on the part of After to undergo transformation and dissolve boundaries, confounding our sensibilities of mind and scale. Scale is important here, because only when taken as a whole does the Lilliputian nature of this indoor landscape become apparent.

This really is a delicious assemblage that has real depth, meaning and interest, and a refreshing delight when all too many installations of found objects seem merely to be going through the motions.