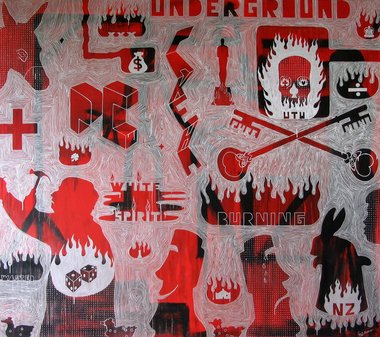 Reddaway's assertion here is that there is a baroque style or set of characteristics that is apparent in contemporary New Zealand art. Yet not only is his exploration of that idea very broad and open-ended here, compared say to a more immediately visually discernible neo-baroque school of painting labelled in New York in recent years, it's also limited to a handful of examples. So broad one might even consider the chaotic nature of university planning of its collection of buildings, and their varied histories as baroque.

The Engine Room at Massey University has that familiar tucked away feeling of any arts school gallery space. Yet even by usual standards, the fact that it’s sited up on a hill, lost in a hodgepodge of buildings and on limited opening hours means it’s hard to get to. I mention this principally not as criticism - its main function is to serve the student population after all - but rather to encourage you to make the extra effort to get there for what has been so far this year a dynamic looking programme of exhibitions.

Some expense has been made in injecting this rectangular box with smart gallery presentation, particularly with the addition of a glass box foyer (it’s a surprisingly pleasant, green place to visit, up on Mt Cook above the city) and the programme comes with a smart line in programmes from Massey’s Litmus Research Initiative. Yet this is not matched elsewhere in promotion, information and signage to do it justice. At present the best place to get a sense of The Engine Room’s exhibition programme is that community cul de sac of a virtual space, its Facebook group photos page. This naturally leaves you with the feeling you’re snooping in as outsider on the social pics of Massey Fine Arts - the identity.

This sense of club social networking is a good thing in terms of student building community, but for a wider public there’s an interesting programme of small tightly curated local and international group exhibitions to be had. The sort of shows that public galleries, big or small generally don’t seem to dare or care to do anymore.

Case in point is El Barroco Loco / The Local Baroque. Like the small group shows I recall happening more in public galleries before blockbusters and surveys increasingly swept them aside, it’s a modest show (seven works and five artists in all) running only for a fortnight with a big interesting dubious theme that shows off the peculiar predilections of the curator. Excellent, I say. Such fluidity and individual character opens up discussion by floating interesting contentious ideas, whilst providing an excuse to bring together some admired works and artists.

Yet El Barocco Loco is also strangely restrained and contained, given the chaotic nature of its subject and humour of its title. The curator is lecturer and artist Richard Reddaway, whose own work has shown a strong interest in ideas around the baroque for some time. His assertion here is that there is a baroque style or set of characteristics that is apparent in contemporary New Zealand art. Yet not only is his exploration of that idea very broad and open-ended here, compared say to a more immediately visually discernible neo-baroque school of painting labelled in New York in recent years, it’s also limited to a handful of examples. So broad one might even consider the chaotic nature of university planning of its collection of buildings, and their varied histories as baroque.

If public galleries have been maddeningly slow to pick up on a good sellable theme here (Excess! Anarchy! Ridiculous decoration! Signs of our times!), it’s been in the face of plenty of evidence of a ‘Baroquian’ tendency in art all over the show. Reddaway has previously himself written about his and fellow exhibiting artist Joanna Langford in a 2007 American collection of essays by academics entitled ‘Baroque Tendencies in Contemporary art’ that considered everyone from Frank Gehry to John Currin.

The general assertion is that the ideas that came in reaction to the Renaissance between the 16th and 18th century, as encouraged by the Catholic church - chaos billowing and mutating frivolously, ridiculously and decoratively out of containment and order - have renewed currency today. You can’t help but concur. Ever since seeing Reddaway’s excellent The Wieskirche take over a corner of the Michael Hirschfeld Gallery like Wandering Willy in 2004 I’ve noticed visually a tendency for artists to break out of or contaminate familiar compartments with viral ideas of fractal and non-linear patterns, which seem to take on a mutant life of their own. This tendency has felt in keeping with the way we now view the world. How for example post 9/11 strategies of terrorism and warfare continue to transmute as the terrain and conditions change.

Reddaway provides an excellent brief essay touching on how the baroque might apply in New Zealand to postcolonial engaged work, artists’ meandering non-linear visual structures, and time-based work in general. But it’s an awfully big label for such a small space and such disparate works.

A readily graspable concept of the baroque is most apparent in the work of Reddaway and Langford. Reddaway’s The Clouds is a continuation of his now long engagement with unfolding small cardboard boxes out of printed pieces of card. The boxes open and close as they straggle in a continuous line up the wall like vines or molecular structures, with the pile of printed card they have escaped containment from in a pile on a table below.

Both frivolous decorative streamers and potentially practical packages, there’s a lovely ongoing conversation here between positive and negative space, escape and containment, but this particular work doesn’t really push Reddaway’s ideas anywhere new for me. Neatly the surfaces are printed with images of dramatic clouds, connecting the work to nature’s baroque impulses, and reflecting the shapes of the town belt and sky outside the glass frontage of the gallery. Yet Reddaway’s glue gun insertion of speaker cones into the boxes feels clumsy here. These speakers connect to radios picking up static and random radio stations from the air above. Nice idea, but physically it doesn’t quite come off.

Joanna Langford’s work has been over the public and dealer galleries like a viral rash in recent years. There’s a nice grubby wayward character to the work The Landless here, the title stressing the nastiness of a plant-form that manages to prop a transmission structure through the air without touching land or water - like a hardy root in an underground cavern, complete with LED glowworms. Working again with broken clotheshorses and plastic grass, this work is far more eloquent than the smaller pieces recently seen for sale at Mary Newton Gallery.

I love how Reddaway has extended his theme to Terry Urbahn’s wonderful video The Sacred Hart. He makes us aware of the way with his videomaking Urbahn amps up the drama of a ‘last supper’ sequence in a bar (hear the whoosh as the candles are lit) where a disparate group of individuals are seated at carefully set place, only to swap more and more freely stories, drinks and places as the evening progresses.

Grant Takle’s paintings Pakeha Burnz and Underground are not only a Pakeha response to the surface layering of the likes of Shane Cotton but hark back to the baroque tendencies of the whole set of so-called Pencil Case artists that emerged from Canterbury in the early 1990s. In this regard these paintings are in style and theme a little tired and overly referential to the past for me. Busy silver graphic marks full of topographical, graffiti and symbolic references to smoldering national racial tensions are made over the top of fire engine red and cinder black expressionistic marks and smoky silhouettes as backdrops. The baroque here is the flammable urban environment of bastardised mongrel codes, where cultures have mixed and employed a raft of purloined loaded symbols as heraldry. Takle does however achieve a sense within the picture frame that any visual order or control could go up in flames at any moment.

Finally there are two atmospheric photographs by Catherine Bagnall taken on tramping trips. They remained oblique to me - human shapes huddling under clothing in blizzards and mist - despite knowing from a previous show that Bagnall has made a habit of tramping in ornate dresses to test out ideas that border on the baroque. All the potential humour, beauty and poignancy of such a juxtaposition was lost to me in the lack of definition in these particular works, but the ideas suggest fertile artistic territory.