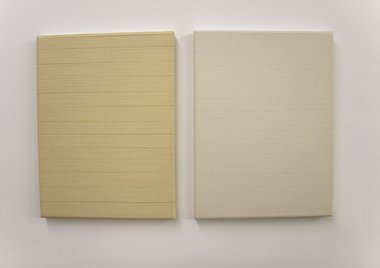 On the gallery walls we can see two ‘paintings,' made with paper masking tape pressed on to small canvas stretchers, overlapping strips in horizontal rows (like lined exercise books) and a third one with grey plastic tape applied much more roughly, and badly peeling. This is art made to avoid permanence, to deliberately decay.

Lance Pearce
I know very well… but all the same

This exhibition of sculpture by Lance Pearce seems to be - as I interpret it (and you may think the photographs reveal me to be way off) - a satire about teaching, an attack on the processes of education where pupils are instructed by one particular authorative individual - instead of going out into the world and discovering things for themselves.

There is a consistent pattern throughout the exhibition that you have to puzzle out on your own, for which there are no titles, no explanatory writing, and no artist’s biography. It seems to be directed chiefly at processes of pedagogy, not say epistemological foundations (the search for confidence in knowledge) - though there is more than a hint of that as well. To break it down, there are five sorts of sculpture here.

The first lampoons the famous charismatic teacher and artist Joseph Beuys. On the floor is dropped a flimsily made, thin grey jacket that alludes to Beuys’ use of thick grey felt. It is casually stitched and barely intact, with no buttons, gaps in the sewing of its light fabric pieces, and dangling loose threads. A dig at art gurus or shamans.

The second sniggers at blackboards (or vertical stands for pinning on paper sheets) intended to be literary receptacles for imparted knowledge. There are two, both absurdly high and identical - with long spindly legs on wooden wheels. One, inside the gallery/‘classroom’, has its rectangular panel covered over with black polythene and masking tape so it is unusable; the other outside the door is exposed and blank.

The third variety consists of two laughably rickety, plywood bookcases (on plastic castors) holding notebooks that are falling to bits. Nearby are also two plywood tables with hollow tops on which are piled up stacks of red, flimsy, homemade exercise books - all unopened and barely functional.

Also, on the other side of the room is a hollow plinth with a glass top - displaying nothing. On the gallery walls we can see two ‘paintings,’ made with paper masking tape pressed on to small canvas stretchers, overlapping strips in horizontal rows (like lined exercise books), and a third one with grey plastic tape applied much more roughly, and badly peeling. This is art made to avoid permanence, to deliberately decay.

The fifth kind of object is a pile on the floor of homemade bags from heavy paper that could be for an industrial vacuum cleaner or for some sort of cuspidor, for sputum or vomit. Also on the floor is a small stack of notepaper in unopened reams. They - and the brown bags - seem to be there as a furtively muttering gesture of anger.

There is an emotional and conceptual tightness to this show that intrigues. Though often roughly made it is not ‘slacker’ art, for it is too consistent, too well thought through. Gentle, but snarly and ferocious also. Scornful but discreet.