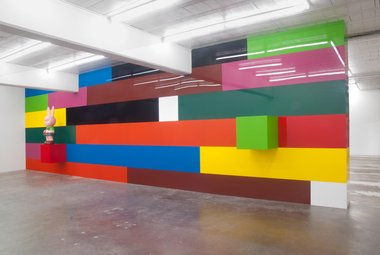 On one side and one end they support a yellow male bunny and on the other side and other end a pink female. The whole project becomes a grim joke about multiplication - again knowingly ironic, considering that Māori themselves were on the verge of extinction in the 1900s and so it dishes out what was often directed at them and their recovery.

Michael Parekowhai
The Far Side

In this almost post-Venice installation by Parekowhai, one that exploits Lett’s new comparatively expansive space far more successfully than his last show The Moment of Cubism did the cramped older K’Rd one (because of the powerfully intense colour and not positioning of mass), the project is a combination of Haim Steinbach commodity-presentation ethos, colonial invader symbolism and his Atarangi series with Cuisenaire rods.

It’s an impressively clever blending, with The Far Side a shrewd, ambiguous title that could refer to the two global hemispheres, this country’s racial (ie. Treaty) divide, or the gallery space bifurcated by the extending wall. The partition could be a huge, colourful, double-sided painting with the massive recto /verso planes mirroring each other. It could almost be a fence of shiny plastic planks that lock in together like a form of enlongated Lego and wrap around the end.

In detail that dividing wall consists of what appear to be six strata-like bands of enlarged coloured Cuisenaire rods (more like bars) that are slightly thinner at the top and bottom. At the ceiling they are cut away to allow the roof’s white supporting beams to pass through. These horizontal units are consistently colour-coded according to numerical value (1 unit white, 2 units red, 3 units pale green, 4 units maroon, 5 units yellow and so on) being an educational aid designed initially in Belgium to develop mathematical skills in children and later used in Aotearoa to teach Te Reo by linking spoken syllables to units. So like the rabbits and sparrows Parekowhai often uses, the system is an import, but not a pernicious invader. (He obviously enjoys the irony of its social benefits.)

Into the wall (in reality a series of spray painted fibreglass veneers) the artist has ‘inserted’ at right angles smaller bars so they project on either side, and function as display stands. (They are related to the circular rods supporting the sparrows in his Elmer Budd works, but more a Steinbach version). On one side and one end they support a yellow male bunny and on the other side and other end a pink female. The whole project becomes a grim joke about multiplication - again knowingly ironic, considering that Māori themselves were on the verge of extinction in the 1900s; it dishes out what was often directed at them and their recovery.

The interpretative possibilities here are complex and politically loaded in terms of several communities. In your attempted decoding, you try and figure out what is coincidence and what might be provocation. For example the vertical yellow bar in isolation in the main gallery space. Why hasn’t he ignored that column? He could have, so what’s he getting at?

Is it consistent with the logic embedded within the wall so that its yellow height matches the equivalent length of the yellow module - or with the given height of the stud, is it bigger and some sort of political statement in itself (referring to say, some Māori fears about Asian immigration)? Yet, despite personal observation suggesting otherwise (it looks higher) it is in fact less so, for the top edge of the yellow border is level with the bottom edge of the narrower strata at the top of the wall. Instead of towering over five units it is well under. Instead of being about community tensions it appears to be about the assertion of the Self - a statement about the vertical ‘I’, confirmed by the male rabbit being yellow too and wearing overalls (Parekowhai’s informal trademark). In a sense it is ‘I am He’ (his most famous early work: The Indefinite Article) revisited.

With the cartoony style of the rabbits (fecund villains as jokey toys) - taken from an exaggerated world where everything is polarised into frenetically hyper heroes and crooks constantly at each others’ throats - Parekowhai here seems to be smirking at reductive community pigeonholing, and even the marketing of his own cute persona, with himself on the podium as the untiringly bright-eyed, chirpy, perky sculptor.

Such tight logic built into the three-dimensional construction of the wall, plus the use of the column to raise issues about personal (not communal) identity, makes this richly layered but ambiguous installation particularly engrossing. Unlike some of his recent exhibitions this is not a show where Parekowhai has created a setting in which to strategically position sculpture taken from various disparate projects, but a methodically planned installation constructed only for this gallery and this show. For this artist it is his best, most rigorous work ever.