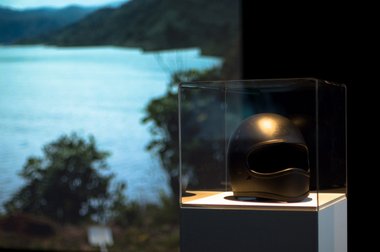 In Hewitt's new installation words are muted. The artist/protestor in the central video work has his back to us. We are behind him, welcome to join in or turn away. Hewitt fully, bodily embraces subjectivity, countering the old documentary and mainstream media pretense of objectivity. Yet he chooses to create open spaces between different elements rather than talk directly to us as a narrator.

Murray Hewitt
The Secrets of their Own Hearts

When I arrive at City Gallery, the various components of a protest and march to parliament are gathering in Civic Square. There’s John Campbell; there a Maori warden; over there a tino rangatiratanga flag; and by the library some orange t-shirts bearing the line “Tamaki is a community not a company”. On the ground a variety of placards are being made. With an array of messages and disparate actors coming together it’s initially confusing to piece together what it’s all about (the removal of state housing). This is what life is like when it has yet to be packaged together for a bulletin at 7, and watching from a distance, the preparations turn out to be as much for the cameras buzzing about as for the street.

A bit like Murray Hewitt’s installation The secrets of their own hearts inside. Encasing the politics and stories of the Urewera, it features different moving image components and several objects carrying a raft of implicit messages.

Yet Hewitt’s approach to political action as an artist is to retain a distance that allows everyone to enter the picture. As you enter City Gallery his video work Recessional is playing in the vitrines. In this work (which I wrote about earlier this year) Hewitt records New Zealand Wars battle sites, but lets the traffic of the country today pass before them.

Unlike McCahon’s The Urewera Mural, in Hewitt’s new installation words are muted. The artist/protestor in the central video work has his back to us. We are behind him, welcome to join in or turn away. Hewitt fully, bodily embraces subjectivity, countering the old documentary and mainstream media pretence of objectivity. Yet he chooses to create open spaces between different elements rather than talk directly to us as a narrator.

The first thing that strikes me entering the darkened North Gallery space are the waterfalls, a series from the Urewera, each captured in glistening black and white in large painting-sized projections on two walls. They flow slowly backwards - as if by magic, such is their silent elegance. Exquisite, they are immediately reminiscent of colonial photography and painting, the sense of nature picturesquely contained. References flicker through them: the Burton brothers, Van der Velden, McCahon. Light and water signify spiritual life. Yet here their reversal of flow feels like a re-appropriation of cultural control, as if the spirit of Tuhoe has turned them back. Or is it the artist himself wrestling with their power? Certainly in the current context of Maori continued assertion of rights over water and its importance as wairua, these works carry wide power.

On another wall is a video work Smoke arises around the silent sea, part of a series of Hewitt’s recorded performances in a black crash helmet (an interesting forerunner is Weeping Waters). With this helmet as signifier of hardcore protestor it is as if he has just stumbled out of the front line during the ‘81 tour.

We are on ground above a misty Lake Waikaremoana, a brisk wind the only sound. A native plant sits in a pot with a handle, painted in stripes. It is immediately familiar to anyone who knows Shane Cotton’s early ‘90s work as a symbol of the containment of land and Te Kooti’s resistance to its appropriation. The artist enters frame, a tartan blanket for a skirt and proceeds to undertake, back to camera, a series of movements before the lake. We cannot hear what Hewitt says but the movement suggests a prayer or karakia and is followed by the raising of the arm and fist in a way that is emblematic of solidarity in the face of violence (as a symbol of resistance it apparently dates back to ancient Assyria). There may also be the slightly raised hand, symbol of Te Kooti’s Ringatu faith. Hewitt plants the small sapling and exits.

Hewitt leaves his oration open to our reading. We are left to cherish the misty beauty of the Urewera before him. On the back of the helmet facing us, however, are the letters UDNRA. An acronym, they stand for the Urewera District Native Reserve Act, a law the wall label tells us was “an ultimately unrealised agreement between the Crown and Tuhoe designed to recognise powers of self-governance, which was eventually repealed in 1922.” Given their obscurity I found this particular device distracting and confusing. I try to avoid wall labels on first encounter of a work, and here I had spent time fruitlessly moving the letters around in my head to try and make some sense. It felt like an unnecessary attempt to spell something out, compared to the tartan, with its more ready visual readings around ancestry and the exchange of blankets for land.

The third section of the work are the objects in the central video themselves - the pot and the helmet on plinths under glass. They are asserted as items worthy of museum display, symbols of stories previously disregarded in official historical accounts. I like how the pot is not scrubbed clean of the soil and plant matter it carried, acknowledging its past as container of appropriated land. The pot and the helmet’s presence somehow make more real the action in Hewitt’s video work - they act in the Christian tradition like relics.

The title The secrets of their own hearts comes from a 1971 essay by Anthony Stone about McCahon, referencing R. G. Collingwood’s statement in The Principles of Art that the artist “tells his audience, at risk of their displeasure, the secrets of their own hearts. His business as an artist is to speak out”. It’s a very nice quote, but the ‘their’ in Hewitt’s title feels as much Tuhoe and the viewers as Hewitt’s.

Much as a church or wharenui does, the installation uses cherished symbols to create a shared human sacred space. Secrets are kept precious. This work has a gentleness, beauty and courage. It pays tribute to the heart of the Tuhoe people whilst keeping their mysteries safe.