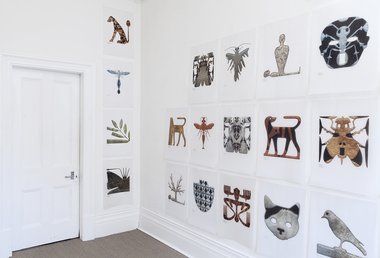 I find myself trying to put the jigsaw together, to try and make sense of it. Killeen constantly thwarts my attempts to do so. As soon as I start to see one pattern of use across the 100 examples, my trail dies off. Images are inexplicably repeated, some things appear more than others - there is an exception to every found rule. The world is like this. We think we find patterns, and then as soon as we do they slip away.

In the book and popular podcast A History of the World in 100 Objects, Director of the British Museum Neil McGregor engagingly tells the stories behind objects in the Museum collection. Historical and cultural context gives each piece a shine. Objects are recognised as touchstones for the world beyond them. They are warmed by the wider histories that accompany them.

Richard Killeen could be said to do the opposite. Like a good modernist he flattens and fragments. His catalogue of the world is a clever, personal abstraction. The different elements of objects and icons - shapes, patterns and surfaces - are entered into his computer as data, and spat out as hybrids. Like some surrealist game, it is the cultural world as some giant reconfigured jigsaw: a new hieroglyphic-like language.

This goes some way towards explaining why, whilst always having enormously enjoyed Killeen’s work, I sometimes struggle with a clinical edge. The sense of the world at a highly-mannered remove. Items isolated from their environments and played with, like frogs dissected in a lab. At best, humour and the tracings of human touch warm them.

Yet the more I think about this new series of work and my slight discomfort, I do recognise a tension here that gives Killeen’s work power and such endurance. That, perhaps, the artist is actually working through the same conflicts as I am.

It’s one that is key to our current age, with imagery constantly ingested, reconstituted and spat out. With this series there’s a rigorous wrestle with digital tools to explore the tension between human warmth, whimsy and wear, and chilly, reproductive cleanliness. One imagines Leonard Da Vinci might have once as both artist and scientist struggled the same with paint

If Killeen is doing the opposite to Neil McGregor in presentational terms - providing a visual reading of the world packed into one multilayered symbol rather than a verbal one, unpacking ideas as 1000s of words - in some other respects they’re both doing the same. The both take one thing from its place and connect it to many others. A personal world wide web. Killeen visualizes what we probably all do to some degree in our mind’s eye - overlaying and patching together different shapes and surfaces - a surreal confluence of associations.

Yet another daring digital mash up, this new catalogue of images provides ample evidence Killeen has lost none of his sharp verve and relevance. Strains of a multitude of different objects are reconstituted in a multitude of different ways on 100 tracing paper pages. It is as if the collector has opened up his specimen box. Each in their flatness but rich surface is reminiscent of an antique broach or a clasp, representing in its shape and patterning the visual language of some clan, guild, caste or other order. Decoration is ennobled as a building block of culture - a carrier of its semiotics.

Pinned to the walls, the titles of each icon (typed onto the pages as if a book illustration) are delightfully playful, expressive mash ups of language, wittily paying homage to the work’s origins: a ‘cartouchey’, a ‘snakame’. They can lead you to meditate on potential alternative histories: a duck-shaped tool is a ‘ducool’.

Killeen was one of New Zealand’s earliest artists to embrace the computer as principle tool, and his work in recent years has demonstrated he remains at its vanguard. There’s an engagement, a push with the inherent tension of what a computer can and can’t do.

Here I immediately marvel at the surfaces as I might a well loved and used ancient craft object in a museum: the marks of use over the rich grain in a polished piece of wood, the veins and glow of red marble - there’s a whole historical language of material gathered here. In the case of each the surfaces gleam as if light is really hitting a three dimensional object. This is something digital reproduction generally lacks - it rarely need bother with this kind of attention to surface. In so doing Killeen plays beautifully off his icons’ flatness.

I find myself trying to put the jigsaw together, to try and make sense of it. Killeen constantly thwarts my attempts to do so. As soon as I start to see one pattern of use across the 100 examples, my trail dies off. Images are inexplicably repeated, some things appear more than others - there is an exception to every found rule. The world is like this. We think we find patterns, and then as soon as we do they slip away.

My one major quarrel is with the presentation. These are Killeen cut outs, but their presentation in the gallery on the wall hung limply on paper does them no favours. They feel made to be picked up out a box a set of a 100 comes in and leafed through, this physical engagement again countering their digital engineering. As wallworks I miss the tactility of cut out aluminium or even cardboard in the way it further emphasises their flatness. Furthermore, as is typical with Killeen, the gallery is allowed to hang the work as they wish. But here the arrangement feels hesitant and unmusical, neither playful or ordered.

Richard Killeen has the distinction as an artist of having marked out a distinctive language for himself in the 1970s - the wall assemblage of cut out shapes as a language of cultural signs - and having continued to play and extend upon it in ever surprising new ways. This is no exception.