Painting in The Physics Room 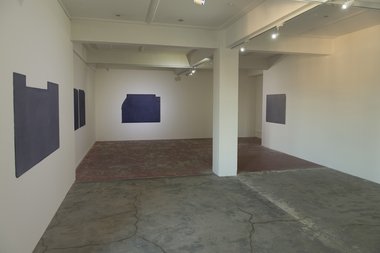 The titles of the individual Kim Pieters works are drawn from the poem and evoke a similar nebulous ambiguity to the paintings with Mallarmé's obfuscating abstract phrases like “were it to be numbered”, “were it to exist, were it to begin”, and “nothing will have taken place but the place”.

It is somewhat unusual to see paintings in a more usually conceptual space like The Physics Room, even more unusual that both shows should find their inspiration in nineteenth century French literature. The greatly expanded post-quake gallery space is hosting Shadow is shade by emerging artists Kirstin Carlin and Emma Fitts, and the mallarmé suite by the established Kim Pieters.

Carlin and Fitts have combined forces in an installation (the conceptual element acts as a sort of cordon sanitaire against accusations of painting itself) exploring the relationship between real and pictorial space, and the act of looking at art and visiting a gallery. The sunny yellow wall and the sheets of glass on the ground (suggestive of the rhythmic walls that guide visitors around a gallery) are unifying factors bringing together Carlin’s paintings and Fitts’ bone china sculptural forms.

The work draws inspiration from Honoré de Balzac’s 1832 short story “La Bourse” (The Purse) from his Comedie Humaine, in which occurs a meditation on the effects of evening shadow on the perception of art:

“He who has never stood pensive by a friend’s side in such an hour of poetic dreaming can hardly understand its inexpressible soothingness. Favored by the clear-obscure, the material skill employed by art to produce illusion entirely disappears. If the work is a picture, the figures represented seem to speak and walk; the shade is shadow, the light is day; the flesh lives, eyes move, blood flows in their veins, and stuffs have a changing sheen. Imagination helps the realism of every detail, and only sees the beauties of the work. At that hour illusion reigns despotically; perhaps it wakes at nightfall!” (trans. Clara Bell)

I am not sure this entirely fits (pardon the pun) because everything is directly lit. Carlin’s paintings are thickly impastoed still life pastiches, further distorted and distanced by an involuted, obtrusive technique. The images, almost irrelevant in themselves, seem almost sucked into the paint rather than being an artifact of the painting’s surface. Fitts has abandoned painting entirely for conceptual sculptures, vertebrae-like rods of bone china wedged into the windows with blocks of foam rubber, working directly with the physical structure of the gallery itself. The whole purpose of the installation seems to be to break down the usual constraints and perceptions of art viewing. This work is showing contemporaneously with a partner installation, Shade is shadow at Window in Auckland.

At the opposite end of the spectrum from that kind of generic, expanded field and de-skilled painting, Dunedin-based Pieters’ new paintings elliptically draw on the contingency, expression of time, chance and necessity, and the disjunction between content and form in the poet Stéphane Mallarmé’s 1897 poem “Un coup de dés jamais n’abolira le hazard” (A throw of the dice will never abolish chance). The low lit paintings are monochrome colour fields in mauves and greys on what looks like found pieces of rough-edged board, occasionally accented by stains or small Cy Twombly-esque drawings. The titles of the individual works are drawn from the poem and evoke a similar nebulous ambiguity to the paintings with Mallarmé’s obfuscating abstract phrases like “were it to be numbered”, “were it to exist, were it to begin”, and “nothing will have taken place but the place”.

Mallarmé’s “Un coup” operates on simultaneous multiple strands of meaning and points of entry differentiated by font and typography. Pieters’ paintings similarly have multiple simultaneous readings: colour field, abstract drawing, objet trouvé, and literary allusion. Both hinge on the nature of the exact meaning of a life. Pieters’ visual formalism similarly counterpoints Mallarmé’s emphasis on pure sound and form over clarity of meaning. The resulting gestalt is far greater than the sum of its parts.

Pieters is very much an intellectual artist very much absorbed in the theoretics and philosophy of art, and strongly revolves around existential questions. Mallarmé’s complex, multilayered nature, deliberate phonetic ambiguity, and concern with pure sound, has the same natural resonance with abstract painting that it does with music, and these ambitious, atmospheric, enigmatic works are ample evidence of that.

Thanks Andrew and Artists, I found the atmosphere created by the low light and evidence previous repair work in the ...

Thanks Andrew and Artists,

I found the atmosphere created by the low light and evidence previous repair work in the gallery space occupied by Kim Pieter’s painting more suited to Balzac’s introduction to 'The Purse" and issues of illusion and materiality.

“In the half light the physical tricks used by art to make things seem real disappear completely, … at that hour illusion reigns supreme; perhaps it comes with the night? Is not illusion a kind of night for our thoughts, a night which we furnish with dreams?”