Janet Lilo at The Physics Room 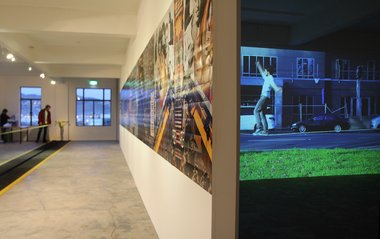 This implied tension may or may not be echoed in the video of the tightrope walker and the physical tightrope stretched over the sort of safety surface markers you see on roads. There is indeed a sense of precariousness, but not danger. The video itself is engaging and the presence of the physical artefact is a tactile bonus that answers much of the audience's curiosity about what is happening in the video, and perhaps also invites them to take a small risk of being winded and some bruises.

Janet Lilo
Hit me with your best shot

Janet Lilo graduated from AUT University (yes, that’s what they call themselves, Auckland University of Technology University) with a Master’s in Art and Design in 2007. Her practice is social commentary that acts locally and thinks globally in the context of media and popular culture in private and public settings. There is in her practice, I think it fair to say, a modest fetish for the kitschy, the cutesy, and adolescent obsessions (one work re-enacted the break-up scene from the movie Twilight in Porirua using two complete strangers cast through an email callout , and another involved re-editing people on YouTube singing pop songs in their bedrooms - but that’s pretty much what the music industry does as well these days). Her video installation Park Life was included in the 2007 Wellington City Gallery Telecom Prospect exhibition and she has had work in group exhibitions in Australia, Taiwan, Japan, Indonesia, France, Germany and the United States. Lilo was a delegate to the 10th Festival of Pacific Art in Pago Pago, 2008; a recipient of the first Asia NZ Japan residency program in Sapporo, 2009; a recent artist in residence at the Tjibaou Cultural Centre in New Caledonia; Pasifika artist in residence at the Massey University Wellington College of Creative Arts (2012) and winner of the Creative New Zealand Contemporary Pacific Art Award 2011. She also featured in the Artspace component of Ho Hanru’s just finished Fifth Auckland Triennial.

At first appearances Lilo’s Hit me with your best shot is a very attractive installation with a colourful photomontage dominating one wall, a projected videowork of someone on a tightrope, and the physical tightrope as object itself. The problem for me is that I had absolutely no clue what it all meant or how the components related to each other until I consulted The Physics Room’s website. Thence it became clear to me why it all appeared random and disconnected - because it actually is random and disconnected. It is a living document in the psychogeographical / Situationalist sense of Lilo’s wanderings around Christchurch on a single visit - a mixing together of the found covers of discarded cassette tapes (remember those?), a series of impromptu Polaroid portraits, and a chance encounter with a tightrope walker in a park.

Supposedly it incorporates “responses to the objects, buildings and people that she happened upon during a recent visit to the city”. However I can’t honestly say I picked up on these “responses” unless they were entirely aesthetic. Which is fine; maybe I’m a bit thick or lacking empathy. Neither could I intuit how the work shows “that a community is formed from the collective interrelationships of individuals who come from all walks of life”. To me that sounds like the sort of self-evident, well-meaning relational aesthetics cant that has padded out the thin gruel of art writing for the last decade or so without actually meaning much. How exactly does it enact this miracle of communication? As Johnson said to Boswell: “My dear friend, clear your mind of cant. …You may talk in this manner; it is a mode of talking in society: but don’t think foolishly.”

That is perhaps a little cruel. As I said, the photographic wall work is very beautiful, if perhaps a little too slick. Each larger image of some random passerby on the street (there are only two or three of them - more might have been more significant) holds aloft a Polaroid of themselves taken a few seconds before. I like the recursive mis-en-abyme of this, and the effect is amplified by the lively, collage-like effect of the montage - there is a genuine sense of the ephemerality of existence and the fleeting nature of flâneureal perceptions and experiences, but to suggest that these somehow: “consider the nature of time, history and politics of representation” strikes me as retrospective reading of tea leaves. This isn’t after all Gillian Wearing‘s canonical Signs that Say What You Want Them to Say and Not Signs that Say What Someone Else Wants You to Say (1992-93), or Mike Fitelson‘s Message Delayed (2012). Neither do they particularly “empower the subject through exposing the process of representation; expanding the relationship between subject, photographer and audience” any more so than a family snapshot or holiday video does. I find myself asking the question: in contemporary art, is it not sufficient that something be attractive and appealing without trying to retcon it into something profound and philosophical unnecessarily? It becomes an albatross around the neck of an artwork that should be able to speak for itself.

The small set of music tape covers, roadside abandoned objets trouvé, do bring an enigmatic and peculiarly anachronistic human element into the installation, fitting with Lilo’s referencing of pop culture and pop music in her practice. I think that is sufficient without the ineffable handwavium that they apparently: “immediately became a way to listen in on and reflect a particular moment and place … as evidence of a broader cultural backdrop and point of reference. How exactly? Electronic Voice Phenomena? Sure the little trove of Eminem and Pat Benatar (the latter presumably providing the installation title from her 1980 song of the same name) tapes may suggest “a time capsule for someone’s taste in music” - but then again they might just be random detritus, and given their generic nature it is high on impossible to say they represent anything in particular. It is one of the more annoying ideas of situational aesthetics that significance can be invested in just anything simply because you change its context or lampshade it. Sometimes a cigar is just a cigar. Sometimes there is no spoon. Apparently the Benatar-sourced title contains “a double take: these are words of encouragement for the subject to present themselves well in the photographic shot; but also a challenge, a violent assertion addressed to a potential aggressor - go on, hit me.” Yeah…Nah. Not unless you’re roaming the bar district at 3am on a Sunday, no, and certainly no more so than anywhere else. Immediately everything is undermined by a cliché about scary, violent Christchurch. If anything I would say the accompanying interpretation was wrong - I prefer to read it as Christchurch defiant in the face of all that Mother Nature has thrown at it.

This implied tension may or may not be echoed in the video of the tightrope walker and the physical tightrope stretched over the sort of safety surface markers you see on roads. There is indeed a sense of precariousness, but not danger (the tightrope is about waist-height). The video itself is engaging (watching someone walk a thin strip of taut nylon is inherently interesting and can always be read as a powerful metaphor for life - much as Nietzsche famously used it) and the presence of the physical artefact is a tactile bonus that answers much of the audience’s curiosity about what is happening in the video, and perhaps also invites them to take a small risk of being winded and some bruises in order to participate, but at the same time it feels like a separate work. It doesn’t quite gel with the photographs and perhaps it would function better as a one off on its own merits. Certainly a live performative element would have been welcome.

Overall, it feels a bit like window-shopping - but very aesthetically pleasing window-shopping. Basically I really like the work as an environment and as a retinal experience, but I’m less interested in some of the conceptual pretention surrounding it. Relational aesthetics does actually require the relationship to be apparent in order to be effective. However, I feel the tide is turning back to Romanticism these days. Perhaps, as Saint-Exupéry has his Little Prince say,”Here is my secret. It is very simple: It is only with the heart that one can see rightly; what is essential is invisible to the eye.”