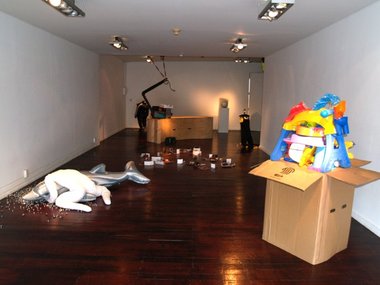 Male readers, I suspect, all have at one time or other put some chocolate in a pocket only to have it melt all over their wallet. This is directly referenced in the work 'Embark Cow' consisting of melted chocolate smeared all over folded coloured prints of wallets and organisers. It alludes to the possibility, distantly echoing Duchamp, Beuys, and Warhol, that the ordinary is every bit as aesthetic and philosophical as “art” if we are prepared to indulge it.

Gaby Montejo‘s work is extreme, absurd, naïve, awkward, sophisticated, and deliberately inarticulate by turns. Christchurch-based Cuban Montejo completed his postgraduate studies in Australia after emigrating from Miami, with two Fine Arts degrees from Virginia Commonwealth University with artist residencies in Oregon, New York and Georgia. He has received a Virginia Museum of Fine Arts Fellowship, Santa Fe Art Institute Scholarship, Jose Puig and Charles Renick Awards in Sculpture- Virginia Commonwealth University, Francis Wolfson Scholarship- Miami Dade College, and a Creative Communities Grant, and has exhibited in Columbia, Ireland, Japan, and in New Zealand in Auckland, Wellington, Christchurch and Dunedin. He came to Christchurch nearly a decade ago and despite all indications of an anti-institutional streak, for part of that time worked as the workshop technician at the University of Canterbury School of Fine Arts.

The title of the show OPP presumably refers to rap group Naughty by Nature’s 1991 chart topper of the same name. It is fitting for an installation predicated on the signifiers of global consumption. O. P. P. stands for “Other People’s Property”, though more deeply, according to the song lyrics:

O is for Other, P is for People scratchin’ temple
The last P…well…that’s not that simple
It’s sorta like another way to call a cat a kitten
It’s five little letters that are missin’ here

So, “other people’s pussy”, though if you prefer, “penis” is also a five letter world starting with ‘P’.

The installation begins with a proscenium in Mo’ Johns: Reply to All - a papering of the top half of the gallery’s glass frontage with the court news section of The Press and accompanying half-page ad for Pack n Save. Thence the viewer moves to a variety of structures, many of which would seem to refer to Montejo’s Cuban background and experience of emigration. The work I was like, Where are you from? incorporates a wetsuit stuffed full of small plastic (sample?) containers, which suggests to me the innocently offensive curiosity most New Zealanders have about people not obviously local, and the donning of a new skin, a travelling through water. There also the bananas, both in the video Mano a Mono (accompanied by live audio on the opening night) and the giant wooden crate version Miami Playboy Gets Sex in the City into which audience members on opening night could insert their fingers to have them painted with perfume by a participant hidden within.

Scent is a binding thread of the installation components. There is a strong smell of new plastic and every component seems to have its own perfume, seemingly lampshaded in titles like Mary Kate & Ashley in Paris and Liz Loves Black Cuban in the suggestion of celebrities with perfume lines. The other most obvious unifying thread are surrogate human forms mate from stuffed clothing - the wetsuit of I was like, Where are you from?, the racing suit stuffed with corks in Mercado Negro, and the elastic body suit in H1N1 Vampire. Presumably these simulacra are stand-ins for the artist as performer - performance being a particularly strong component of Montejo’s practice. I particularly like H1N1 Vampire - the body suit, stuffed into vague human form with small chrome-plated plastic knobs. This humanoid form sprawls over an inflated plastic dolphin (another travel symbol?) positioned of a scattered galaxy of the chrome-plated knobs. Perhaps the knobs represent the deadly flu virus of the title, a suggestion that the world is both wonderfully, dangerously, irrevocably interconnected. The effect of the light on the chrome is optically enticing.

A less obvious interconnecting theme is the ubiquitous references to the mundane and everyday, particularly in relation to food and brightly-coloured children’s toys, given a recontextualised lustre. Male readers, I suspect, all have at one time or other put some chocolate in a pocket only to have it melt all over their wallet. This is directly referenced in the work Embark Cow consisting of melted chocolate smeared all over folded coloured prints of wallets and organisers. These familiar things sneakily press our buttons in a quasi-ritualistic quality. It alludes to the possibility, distantly echoing Duchamp, Beuys, and Warhol, that the ordinary is every bit as aesthetic and philosophical as “art” if we are prepared to indulge it. At the same time it seems to be a rejection of the received shibboleths and panjandrums of the “culture” of art. There is a third option - the art life and everyday life are endlessly circling each other over which will get to devour the meagre snack of our attention.

Readings deeper than that seem impossible - there is so much to take in and not it is easy for the mind to find safe purchase - but then it doesn’t do to pull aside too many curtains in Oz.