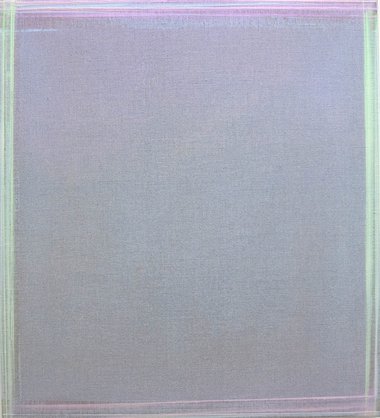 Leigh Martin's paintings have evolved considerably from the slickly resinous, translucent ink and shellac colour fields on Fabriano paper to using coarse grain of the linen and a prismatic layer of medium on top to achieve his enthralling effects of light and colour. The effect, taffeta-like, has a Mannerist resonance expanding on the fancy colour transitions of Pontormo and Andrea del Sarto, filtered through the tropes of minimalism and modernism, colour field and monochrome.

Two recent contemporaneous exhibitions at Christchurch’s Jonathan Smart Gallery show that even when exploring the visual vocabulary of modernism, it is still perfectly possible to playfully and meaningful allude to tradition - but that’s what postmodernism is all about, a breaking down of hierarchies and chronologies, a rejection of notions of aesthetic hygiene even while employing their bag of tricks, Julia Morison‘s 2000 Grounds for Error, and Leigh Martin‘s Silenced.

Morison’s works take a classic staple of the culture of painting, the formal frame of the Academy, and works a spell on them. The choice of frames, the surreally biomorphic and organic exudations, mostly a uniform and unifying minimalist white despite their abjectionist forms, suggest a playful take on Rococo aesthetics reminiscent of artists like Katsuyo Aoki and Kris Kuksi. The titles invite narratives with their mysterious and evocative names (a similar trick was employed by Italo Calvino for his Invisible Cities): Io, lover of Jupiter and famously turned into a cow; Perry, slightly more of a mystery; Angelina, little angel with shades of Hollywood; Ravenna, pungent with Renaissance Italy; Rosa; Orlando, perhaps recalling the magically transgendered hero/heroine of the Virginia Woolf novella; and Hortense, who sounds like a sensible, hockey-playing sort of gal. They are, however, as with most abstracts, almost certainly arbitrary.

There is a strangely clinical and ambiguous eroticism and violence to it all. An obvious breast-shape, ornately framed and dusted in rouge, recalls the Sèvres Etrustcan Breast Cups made for drinking milk, ordered for the Laiterie, the fantasy neoclassical dairy at Chateau Rambouillet, purchased by Louis XVI for Marie Antoinette in June 1787, and according to legend modelled from the Queen’s own fair bosom. Another form, long and limp from its masculine square frame, suggests a hybrid of flaccid phallus and empty sleeve. Others extrude pseudopods and more arcane structures to test their environment. The combination of frames and abject organic masses perhaps alludes to Eva Hesse sculptures like Hang Up (Art Institute of Chicago, 1966), or even the transformation of Christchurch.

Still in the theme of hybridising the classical and modernist, Leigh Martin’s paintings have evolved considerably from the slickly resinous, translucent ink and shellac colour fields on Fabriano paper to using coarse grain of the linen and a prismatic layer of medium on top to achieve his enthralling effects of light and colour. The effect, taffeta-like, has a Mannerist resonance expanding on the fancy colour transitions of Pontormo and Andrea del Sarto, filtered through the tropes of minimalism and modernism, colour field and monochrome.

The pigment has been forced into the linen by the tremendous force of a squeegee. Most of the paintings are from the Silenced series - neither one colour nor the other, ambiguous, sealed-up by impromptu borders of residual pigment, silenced. One work, however, comes from another suite, Shallow Depth, so named for a similar ambiguous playfulness, but with depth instead of colour. There is a far greater emphasis on the physical materiality in these works than the boiled lolly, glazed tile subtleties of the earlier resinous works. Much can be said with eloquent silence; Irish poet Seamus Heaney spoke of the poet only being interested in “throwing the stones of silence”.

In the case of both artists one might make comparison with Cornelius Norbertus Gijsbrechts’ trompe l’oeil The Reverse of a Framed Painting (1668-72, Statens Museum for Kunst, Copenhagen) because both in their way seek to deconstruct the nature of painting itself. In many cases Morison removes the painting completely to make a sculptural fetish of the frame, subverted somewhat by a tarnished mirror standing in for abstract expressionist slather, or the idea of the Academic nude reduced to a single abstracted (and as in much Academic painting, de-sexed) body part. Martin, with his emphasis on the substance of the linen, seems like Gijsbrechts to have flipped the painting over, but applies a transient painterly aura of authenticity through subtle, alchemical application of pigment. In both cases when the artist is philosopher, the art is just the tool with which to think.