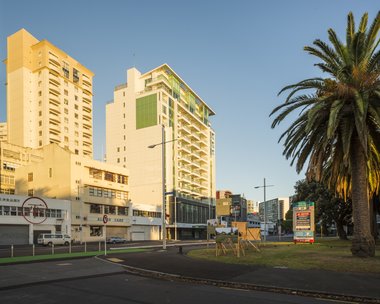 Looking closely at these hoarding images of sections where families have been evicted, buildings ‘subtracted' and the site of their foundations resown with grass, there are lots of signs of traumatised communities. One house has angry graffiti sprayed across its weatherboard exterior; another section has dead trees and dried cuttings scattered across its path.

Dieneke Jansen
G.I. Areas A & B

This Beach Rd site presents one of three works Dieneke Jansen has been working on as part of a larger project critiquing the government’s dismantling and disposal of state housing zones (dwellings and land) in Glen Innes, and their replacement by the private development of midrise apartment buildings.

One work involves a projection of a 1946 film Housing in New Zealand onto the wall of a state house facing immanent removal, as well as screenings at Ngā Taonga Sound & Vision. Another involves a progressive lunch next Saturday where the public move from site to site learning about these historical developments in detail. The third is this group of hoardings that on a grassy corner look like some unorthodox promotion of realty. Six photographs of varied proportion are printed on to panels of corrugated plastic, attached to a plywood backing and held vertically by struts and batons.

Looking closely at these hoarding images of sections where families have been evicted, buildings ‘subtracted’ and the site of their foundations resown with grass, there are lots of signs of traumatised communities. One neighbouring house has angry graffiti sprayed across its weatherboard exterior; another section has dead trees and dried cuttings scattered across its path. In other images the artist has intervened directly with a symbolic trampoline, cardboard cut-outs of state houses on sticks, lined up bags of potting mix with plants placed on top, a clothesline festooned with garments stretched across an empty section between two separated houses, or poles atop with spherical ‘seed bombs’ where birds can aerially disseminate the seeds of native flora.

The other crucial aspect is the downtown site on Beach Road of this installation, just across from the old Auckland Railway Station (on Anzac Ave) which now provides accommodation for students. It is right on the edge of the inner city’s surrounding highrise apartment block zone, an indication of the coming changes to small towns and outer suburbs over the next twenty years when they will be gobbled up by ‘central’ Auckland. Jansen’s project is about time, disruptive social change and council planning, critiquing its brutality by mixing in poetic metaphors (in her images) for height and verticality: a trampoline where a building once stood, house silhouettes on batons, poles holding up bird food, plants stacked on plant food.

This is a really interesting project, with a lot more to it than merely fighting for the underdog against fascistic bureaucracy and alleged ‘progress’, or puny regional communities against the state. It is multi-facetted in its strategies, with different elements of history, geography and economics, fiercely scrutinised and locked in tight.