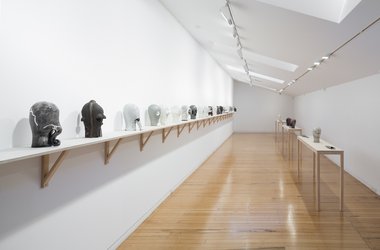 Morison's 'Headcase' exhibition sets up its own territories of tension. And what is contemporary art if not some ambivalent state of exception? The long march of ceramic heads down the length of the gallery's upstairs room, builds intensity through accented repetition. Each head is based on the form of the anonymous milliner's block, yet each head cuts itself off from its neighbours through typological variation.

Convinced that sacred ritual had to be enacted if its transformative power was to be more than inspired book-learning, members of Acéphale - the post-Surrealist secret society of French writers and artists, which included founder Georges Bataille, Roger Caillois, Pierre Klossowski and André Masson - actually discussed the possibility of executing a willing sacrificial victim in the woods where they held their nocturnal solemnities. Given that the name of the group and of its eponymous literary review means ‘headless’, and members were expected to hallow the beheading of Louis XVI, and that Bataille believed life was everywhere oppressively subjugated to the head as controlling symbol of reason and hierarchical authority - it is likely that this willing victim would be executed by decapitation. Evidently a suitable victim was nominated, but no willing executioner was agreeable.

If an interest in the toppling of heads metaphorical or literal is a sign of deep dissatisfaction with egoic autonomy and overweening subject-centered rationality, as it was for many pre-WWII French intellectuals, we might ask if Julia Morison’s 28 ceramic heads arrayed on three tables and a very long shelf are not a terrifying display of heads severed for the just cause of de-subjectivisation? Discussing the idiosyncratic College of Sociology, which represented the less esoteric side of Bataille’s pursuit of ‘sacred sociology’, Denis Hollier says, “The literature of the period is strangely obsessed, tempted at the same time that it is terrified by the motif of depersonalization of consciousness”. Right now, most of us are probably more terrified by what we hear and see of Islamic State sanctioned beheadings in the name of someone else’s declared just cause than by any threat to our merely metaphysical or psychic integrity. It is not difficult, however, as many have shown, to join the dots between an internalized metaphysics of sovereignty that underwrites first world imperialism in the Middle East and the recent re-emergence of insurgent Jihadism in the region.

Morison’s Headcase exhibition sets up its own territories of tension. And what is contemporary art if not some ambivalent state of exception? The long march of ceramic heads down the length of the gallery’s upstairs room, builds intensity through accented repetition. Each head is based on the form of the anonymous milliner’s block, yet each head cuts itself off from its neighbours through typological variation. The theatrical difference of each separate head bites the insistent rhythm of the row into sections. There is a driving logic to this project, there is what Deleuze and Guattari talk about as the ceaseless production of process and stalling of process; this is what the constant variation of character and physiognomy do within the standardised format. And there is a brutal joy to it all. Garroted from its base by a clay cutter’s wire, each baked head cuts out a fantastical profile against the ongoing industry of invention. And this sectionalised discontinuity/continuity of the lined-up heads is mimicked in the cream-coloured head on its own narrow table. It’s difficult to say if this almost featureless head fellates or evacuates the long rope of alternating black, white, and grey discs that resembles a striped felt pole by Peter Robinson.

Catalogue writer Anna Smith finds playful energies running through the whole and thinks of Deleuze’s interest in the logics of Lewis Carroll. While over half of the heads appear self-contained, autotelic, the rest of them are partnered up with mini-me variations or doublings of the dominant form so as to model in-house generative units. Whether these pairings resemble co-dependent master and assistant duos, Madame and Mistress, mother and child, other altered-ego forms, or structural devices in tandem - such as the double-chambered brazier with purple haze, and the two rooms trap with drilled-grill for air, or even the long-sighted milk maid with her optical stalks and little pails swinging - each piece is a seizure in the production line. As if triggered by excess, each arresting prototype trips further intensification, an alternate output in a stop-motion jubilance of transformative tumbling.

Heads are impossibly overdetermined; absurdly congested monads, cranium-scale worlds. With Morison’s trophy specimens, formal and material means are pushed to innovation and exaggeration because the head is always laden with too much contradictory content; too much psychomachia. It suffers too many stresses, knows too many pleasures, and makes way too many plans. Bolted boiler plate panels indicate a pressurised interior. A urinal strainer face thickens inhalation through reeking claustrophobia; and a steampunk Dogon Squidward head-house has salt-rusted pipes outside and dolls house conviviality indoors. Appendages, accoutrements and pronounced texturings count - a suction cup, cables, stoppers, plugs, bandages, a thrusting snout, stiletto nipple-eyes, extruded eyeballs, rims, ridges, suckers, nodules, protrusions, craquelure, glaze acne, a becoming-psoriatic. Morison’s molars and canines on filaments from the rubber-lipped slug-head may have been painfully extracted for the mosaic of variously stained teeth assembled by the mechanised paving beetle in Raymond Roussel’s 1914 novel Locus Solus. And the probe-like tongue touching keening villi in another work rhymes with Roussel’s skinned cat in the same novel that wears a sensitised perforated nose cone underwater to activate the suspended brain of Danton. Danton, heroic orator of the French Revolution beheaded during the reign of terror he helped make possible. The story goes that the last words the real Danton spoke to his executioner were, “Don’t forget to show my head to the people. It’s well worth seeing.” And so are Morison’s many.