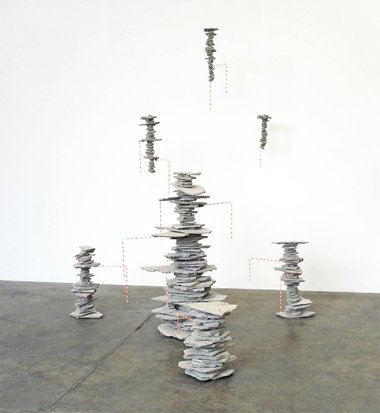 'Calling the Deep' takes an earthy approach, piling up seemingly precarious cairns of broken fragments of cast cement. These either rise from the floor like exotic desert mesas or else hang, defying their solidity and apparent mass, suspended from the ceiling as if obeying only the gravitational laws of cartoon physics. From them dangle orange and white-striped bamboo skewers - perhaps safety barriers or surveying equipment, in homage to the fractured city that hosts it.

Arriving at each new city, the traveller finds again a past of his that he did not know he had: the foreignness of what you no longer are or no longer possess lies in wait for you in foreign, unpossessed places.
- Italo Calvino, Invisible Cities

Jo Langford is well known for her Dr Seuss-like miniature surreal landscapes of humble materials. Frequently spindly and simultaneously sprawling, they seem intimately to invite the viewer to miniaturise their fantasies and project them in a way reminiscent of the escapist Perky Pat fantasies in Philip K. Dick’s The Three Stigmata of Palmer Eldritch (1965).

Frequently these elaborate, perilous constructions climb into sublime heavens made from plastic shopping bags, aspiring Babel-like to a lofty transcendence of their earthbound nature. If you have seen a number of Langford installations you may think of Italo Calvino’s 1972 antinovel Invisible Cities which includes such wonders as Isauria, city of a thousand wells that rises on impossible stilts over a subterranean lake; Armilla, a city that consists entirely of its own plumbing; or Thekla, a city of scaffolding forever being built towards the sky with the stars as a blueprint.

The materials that Langford uses places her work in an immediate dialogue with consumerism and waste. Art has not always acquitted itself well in this dialogue, often coming out more on the side of individual expression than communal responsibility. Langford addresses the relationship by her adoption of the discarded and unconsidered, but it is important to stress that what she is doing is not recycling, but an alchemical transformation. In that sense Langford’s art may be considered an antipodean offshoot of the Italian Arte Povera movement which attacked the values of established artistic and cultural hierarchical sensibilities by embracing the possibilities in the discarded and mundane, though Langford is perhaps less stridently political, more meditative and quietly philosophical.

In her show, Calling the Deep, at Christchurch’s Jonathan Smart Gallery takes a more earthy approach, piling up seemingly precarious cairns of broken fragments of cast cement. These either rise from the floor like exotic desert mesas (shades of the Road Runner and Krazy Kat) or else hang, defying their solidity and apparent mass, suspended from the ceiling as if obeying only the gravitational laws of cartoon physics (though equally one may recall the floating Hallelujah Mountains in the 2009 movie Avatar). From them dangle orange and white-striped bamboo skewers (skewers often appearing as a material in Langford’s work) - perhaps safety barriers or surveying equipment in homage to the fractured city that hosts it. This continues the theme of lightness, airiness, the numinous and weightlessness that carries through all Langford’s work to date, even here when embracing stone and the earth.

This theme is continued in box-framed drawings, mountainous landscapes apparently drawn with road metal and punctuated with cliff shelves with their own orange and white skewers. These suggest to the viewer the abodes of hermits and saints and places of contemplation. Perhaps then we may think of the cairns and mesas as a similarly philosophical landscape; an allegory of intellectual and spiritual transcendence, a sort of minimalist and miniaturised version of the Weltlandschaft where through mannerist distortions the artist tries to capture an impossibly vast landscape as a metaphor for the world in order to make a philosophical statement about the people who inhabit it - though in Langford’s work the human presence has been erased, ablated, as if a neutron bomb had detonated overhead and left only stone and a few trappings of human detritus.

These two works are counterpointed by a small diorama: a box roughly the size and shape of a small pre-flatscreen television, resting on a plinth and painted gallery white. Looking into this box we see an illuminated minimalist scene: a lunar landscape of cement, and behind some barricades and ambiguous form on a wire skeleton made out silage wrap. In part this form recalls the plastic shopping bag cloud forms of works like The Whisper Lands (Auckland Art Fair 2009) and the enormous baroque canopy teamed of Up From the Plainlands (Christchurch Art Gallery 2009), but we should consider that silage wrap also played an important part in Langford’s The High Country as part of Christchurch’s SCAPE festival in 2012. There the green tinge made it suitable as a foliage substitute, so perhaps here it also represents something living, though of an ectoplasmic sort.

The three distinct element are very well conceived in their relation to each other, a triptych on a theme, that with more heavy handed handling, could have come across as formulaic - wall work, open installation, closed installation - but here provides an aesthetically satisfying completeness; a closed loop for open understandings and interpretations.