Bricoleur of the Apocalypse. 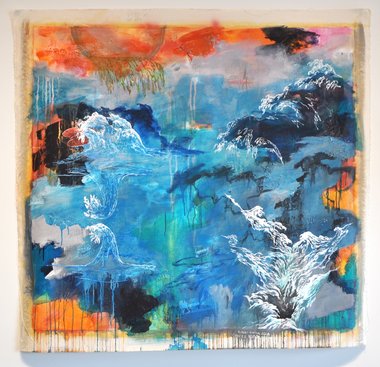 In his recent show, Preaching to the Disconcerted, much is packed into a mere seven eschatological paintings. Motifs repeat. There is the tsunami derived from Hokusai's The Great Wave off Kanagawa, taking up sometimes entirely un-wave-like iterations, dribbled on the surface of the paint in spermatozoic white. Forms like ship bows—whether cargo or naval, it's hard to tell—mingle with tangles of I-beam girders, and more morbidly, a pair of Gustonesque feet sticking out of a pile of rubble, mud or ordure.

Michael Armstrong
Preaching to the Disconcerted

- Archibald MacLeish, The End of the World

Timaru-based artist Michael Armstrong, a lecturer (since 1994) and programme co-ordinator at the South Canterbury branch of the Ara Institute (formerly Aoraki Polytechnic before it merged with CPIT) is by no means as well-known as he deserves to be, particularly north of Cook Strait. Nor is he without his laurels, having been Francis Hodgkins Fellow in 1984. He shows consistently around New Zealand, particularly the South Island, and sometimes in Australia.

For Armstrong, painting is a quiet act of protest against the newer Horsemen of the Apocalypse: endgame capitalist consumerism, corporatism and hegemony. These are manifested as a bricolage of cartoonish forms recalling David Salle, Philip Guston and Sigmar Polke, projected flatly onto a turbid, lurid and spatially ambiguous Abstract Expressionist void. There is, perhaps an echo of R. B. Kitaj’s If Not, Not in the National Gallery of Scotland as well. Ghosts, mere outlines, emerge, merge and vanish in the thick, juicy sundae fog of bravura gestural brushwork.

In his recent show, Preaching to the Disconcerted at City Art in Sydenham, much is packed into a mere seven eschatological paintings. Motifs repeat. There is the tsunami derived from Hokusai’s The Great Wave off Kanagawa, taking up sometimes entirely un-wave-like iterations, dribbled on the surface of the paint in spermatozoic white. Forms like ship bows—whether cargo or naval, it’s hard to tell (either works)—mingle with tangles of I-beam girders (a reference to McCahon’s “I AM”, perhaps), and more morbidly, a pair of Gustonesque feet sticking out of a pile of rubble, mud or ordure. And is that ink mixed in there with the acrylic?

While this dark imagery has been a consistent part of Armstrong’s work since he completed his MFA at Ilam in 2008, his palette also brings much vibrant retinal pleasure. My personal favourite is the flamboyant The Independent Man with its abrupt juxtaposition of vermillion and fiery cadmium-like yellow, which brought back for me memories of standing before Rubens’ The Fall of the Damned in Munich.

That’s the exception. The other paintings make commanding use of cool cerulean, aquamarines and indigos, amid the red and yellow, that are more self-consciously oceanic and give a more concrete logic to the wave motif in an environmental and political allegory of humanity overwhelmed and drowning—without a Noah, nor his ark, in sight. Consumer capitalism’s “après moi, le deluge“. This results in a dextrously-handled visual complexity, which in other hands might have ended up a curious chromatic muddle.

Rest assured though, that these many impressions are resolved in an appealing and strikingly original synthesis. Frivolously, a metaphor that came to mind was Michael Ende’s 1979 fantasy novel The Neverending Story as visualised in the 1984 movie of the same name - a vast, boiling, dark cloud, the manifestation of disbelief and cynicism that inexorably devours the magical land of Fantasia (Fantastica in the book) symbolising the imagination. Only floating fragments remain. It’s the end of the world.

The canvases are unstretched, as they should be. Were they on a stretcher, they would be far too flat and you wouldn’t see the delicate Morris Louis-esque dribbles down the bottom or have an occasional glimpse of the artist’s pencilled notes. The lively impasto and vorticial compositions capture all the anxiety of modernity, the chaos of the free market, and its last days fragmentation of society, and climate change. The tendency to sometimes translate this into a vernacular of natural disaster seems particularly poignant in Canterbury, but would have a universal currency on white walls anywhere.

That said, some of the titles seem overly bogged down in sciento-philosophical musings—The Invisible Hand, for example, being an obvious reference to Adam Smith’s 1776 The Wealth of Nations, and Between the Super Symmetry and the Multiverse, which as a title suggests a superficial pretentiousness lacking in the painting itself. This is only a minor cavil however, and may be a deliberate Dadaist haute-serious joke à la Georges Mathieu or Cy Twombly.

Only at points do the deeper message of the paintings generate for me a visceral shudder—the feet poking out, in particular, like Weegee-style newspaper photos in less cossetted times, or a pair of Robert Gober legs sticking out of a wall, but cartoonishly stylised and exaggerated.

This is mature, honed painting. While the politics, the weighty burden of ignored Cassandra prophesying the doom of Troy, are important, and drive Armstrong’s act of creation in the first place, in terms of viewing pleasure they aren’t obligatory.

So now that I've gone through all the hoopla of registering (in order to comment) and finding this page Again...I've ...

So now that I've gone through all the hoopla of registering (in order to comment) and finding this page Again...I've forgotten much of what I wanted to say. But it's something like
'I Love your writing Andrew Paul Wood! ALOT.'....
Pulled in here by the painting 'Closed System' (some irony in that?) from my usually surface skimming for good-art. Rarely do I delve a bit deeper for the commentary. Too often whatever commentary exists is some variant of marketing/boosterist hype/blathering drivel and/or perhaps worst, distancing jargon-rich, idea-poor artspeak (or so I think of it). Perhaps that just delineates quite clearly my space on the fringe (or even further), outside of the conversations about art.
But I found this article both relevant to this artist and his work, illuminating regarding aspects of it/he, and intriguing in the ways connections were made to other interests, realities and challenges In the World.
All together - a very enjoyable read.
Will commence to find more of your writing and poke about here at this site.
Well done and Thank-you.