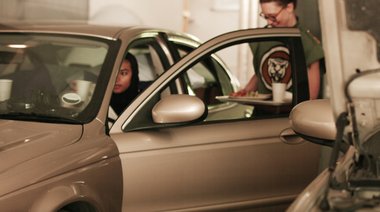 Situated in a quiet mews only minutes from the bustle of High Street Kensington, 'Hotel Jaguar' is extremely close to Europe's most brand-heavy shopping streets; from McDonalds through to Swarovski, this West London thoroughfare exists as a celebration of late capitalism. Newall's space is specifically located in a former Jaguar dealership because this allows the artist to reflect on the currents of money and power that are reshaping our world.

Amanda Newall‘s Hotel Jaguar is an immersive installation of wild ambition and vast scope. It ranges far and wide in its practices and concerns, hits certain targets and misses others while demonstrating that Newall is an artist of extraordinary energy and vision. Newall, born in Timaru and a graduate of Ilam, has lived in both the UK and Sweden since 2005. She has lectured in fine art departments at universities in the aforementioned European nations and is a member of what might be best described as the International Brigade of artists who today appear to cross national borders with remarkable fluidity, creating and exhibiting work that is playful yet purposeful.

Hotel Jaguar takes place in a disused building that once housed Britain’s oldest Jaguar car dealership: Newall purchased three Jaguars to use in the exhibition, then made use of workwear, office furniture and engineering tools left behind by the former staff. She transforms everything and creates plenty more, literally building Hotel Jaguar as a conceptual space where ‘guests’ can reflect on Donald Trump, Brexit, neo-liberalism, post-colonial corporate practice, the power of brands and much else.

There are several videos running in different areas of Hotel Jaguar and the cars in the showroom now serve as beds (with accompanying soundscapes designed by Finnish sound artist Antti Sakari Saario) while specially embroidered bean bags are situated around a witches’ circle and a disused office is now a tangle—a web of sorts—of mechanics’ overalls and documents.

Situated in a quiet mews only minutes from the bustle of High Street Kensington, Hotel Jaguar is extremely close to Europe’s most brand-heavy shopping streets; from McDonalds through to Swarovski, this West London thoroughfare exists as a celebration of late capitalism. No East London or Peckham scruffy bohemianism here, Newall’s space is specifically located in a former Jaguar dealership because this allows the artist to reflect on the currents of money and power that are reshaping our world.

Entering Hotel Jaguar guests find themselves in a maze, a labyrinth of sorts, where ideas and all kinds of art practise rub up against one another. Anyone attuned to Newall’s art project and wanting to immerse themselves in this sprawling site will need a couple of hours to take in the many layers and levels (Hotel Jaguar has many rooms, an upstairs lounge area, even a courtyard of sorts: everywhere but the toilet is occupied as creative space) and get a sense of what Newall is attempting to achieve.

Upon entering Hotel Jaguar several levels of disorientation get underway: guests are welcomed by Newall who is in a striking, self-made costume—the artist is working on a PhD in Costume in Art Education and Institution—that bears the Jaguar logo on its chest and the Tata logo on the back (Tata being the Indian steel corporation that now owns this most ‘British’ of brands).

Newall welcomes visitors as “Petra from Slovakia”, explaining that she is a young woman who has been forced to come to London to work menial jobs because unemployment is high back home. Petra informs us that she finds life in London expensive and unhealthy—low wages force her to eat McDonalds on a daily basis. But, she notes, Brexit (many of whose supporters were spurred on by their dislike of foreigners—such as Petra—coming here to work) may see Tata shift Jaguar production to Slovakia.

Newall plays Petra so to engage viewers with the issues that inspired Hotel Jaguar and to raise discussion/debate. Yet she’s not a trained actress and this means she stumbles at times—I observed one guest bluntly state that her accent sounded “more New Zealand than Slovakian” to which Newall deftly countered with a side story about visiting Aotearoa. By employing elements of dystopian theatre Newall ensures Hotel Jaguar is far more than just a silent space for her guests to wander about—she fires questions at guests as to their thoughts on Brexit, Trump, Tata and such. Not in a confrontational manner but so to engage with the shared subconscious she feels we all share and that informs Hotel Jaguar.

Hotel Jaguar‘s garage space hosts a screening of Newall’s video The Hoover Diaries (which toured NZ mid-July 2018). This multilayered work mixes autobiography with true crime and a look at the early stages of neo-liberalism as it is unleashed on the local fishing community. Set in Timaru in the 1980s, The Hoover Diaries focus on the links between her first concert experience (glam pop band The Mockers), a double murder that took place on a fishing boat and how Roger Douglas’s selling off of the fisheries saw what once had been a trade individual boats plied now being run by a selection of corporate entities (narrated by Newall’s 9 year old daughter from the artist’s childhood diaries, it’s an effective meditation on how music, murder and radical economics can combine to shatter childhood’s innocence).

The Hoover Diaries, while intriguing to me (a Kiwi who recognises band/ land/ politicians), proved confusing to some guests: while I was present a couple wondered aloud what a video featuring “Kiwi New Romantics” (Andrew Fagan as 1980s pop candy—he also appears almost unrecognisable as a weary 50-something contemporary rocker) had to do with Hotel Jaguar. The answers would be ‘themes’—Newall is attempting to have fun and sift her consciousness for signs of what the future would hold, while remaining deadly serious in her investigation of money and power.

The main showroom where the Jaguar vehicles sit, now immobile as soft beds, and large cloth emblems hang (Newall’s skill with working fabrics enliven the exhibition throughout) is Hotel Jaguar‘s epicentre. To fill such a large space with both extremely desirable (and masculine) status symbols alongside soft bedding and flags and cloth slogans is a brilliant contrast. Passersby press against the showroom’s glass frontage, wondering what kind of car dealership this is and Newall invites all and sundry to enter Hotel Jaguar as guests. Here Newall has hosted sleepovers in the cars so to ensure Hotel Jaguar functions as a ‘social dreaming’ event.

Upstairs the lounge area has been transformed by Linda Persson and a group of witches into a witches’ circle surrounded by bean bags bearing Trump’s emblematic profile: seemingly magick was called upon to help remove vulgar orange from power. I wasn’t here for the opening (1) yet Newall tells me that, as it was underway, in another part of the exhibition an aggrieved man attacked one of her colleagues with a baseball bat (not so much life imitating art as London’s myriad communities angrily rubbing against one another). These happenings suggest how Hotel Jaguar draws all kinds of energies, positive and negative, from the metropolis surrounding it. Inevitably, Newall is not hopeful that her aesthetic magick is going to unseat the President but the sense of mischief and reflection she employs here—and throughout Hotel Jaguar—ensures this unwieldy, untidy, epic installation succeeds with wit and resonance.

(1) For opening night (30 June) Newall curated an evening of various performers. They were:

*Richard Crow and Natalia Mali - There is the serpent and there is the dove, choose wisely (deluxe edition)

*Linda Persson - How to Leave Your Human Body