Truth (For Once) Rules 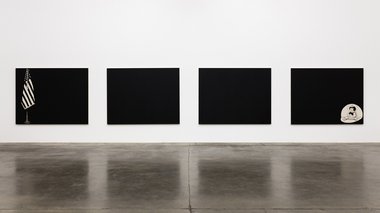 In Stark's space, on the long wall presenting four black paintings, the appropriated Ernie Bushmiller comic character, Nancy, fumes over the American flag at the far end. It's an extraordinarily prescient image for today, but it is also ambiguous. It mocks abstraction and the ossification and densification of language (art's oft hidden textual argument) as well—particularly as encouraged by the art world.

It is great that Honestly Speaking: The Word, The Body, and the Internet—this complicated convoluted international show—is having a second, much needed, longer period of exposure after the Covid-19 lockdown. It takes time to grasp its densely layered structures and to winkle out its philosophical nuances (especially as the institution hasn’t bothered with a cheap elucidatory brochure). It’s a contemporary art show that partly—as in Frances Stark’s contribution—critiques the excesses of contemporary art (typified by ‘Enemy’ Poets on the Pyre), often presenting a rarefied and cerebral fusillade against obsessive textual intellectualism shown by hoarding; and by implication, institutions like Auckland Art Gallery Toi o Tāmaki, curators like Natasha Conland, and contemporary art enthusiasts who read like you and me.

Although you enter the four artist video installation show from the central inner-gallery staircase, the most impressive work is at the outer (far) end—for reasons aural as much as visual. In other words, sound (in my view) helps the works of Frances Stark and Shahryar Nashat resonate more than those of Martine Syms and Sriwhana Spong (see this interview), two works dominated by large (formally impressive) circular visual components.

In Stark’s space, on the long wall presenting four black paintings, the appropriated Ernie Bushmiller comic character, Nancy, fumes over the American flag at the far end. It’s an extraordinarily prescient image for today, but it is also ambiguous. It mocks abstraction and the ossification and densification of language as well—particularly as encouraged by the art world.

Stark’s four monitors scroll an incessantly long list of Instagram images that she draws on to seemingly mock the social media community with its noisy and trivial, visual and textual overload. The ‘Poets in the Pyre‘ seem to be indiscriminatory American Instagram snippets that meld together opposite extremes, such as easy with hard, on with off, clever with stupid—a sardonic jamming together of opposites that deconstruct binary assumptions and present disputable concatenations. Her soundtrack features an obnoxiously misogynist Big Sean hip hop song that one assumes is used sarcastically.

Shahryar Nashat’s sculptures (Start To Beg, 2019) and 6 x 3 grid of butted video screens (Image is An Orphan, 2017) draw on Sci-Fi and Queer theory to examine the construction of the subject, and the relationship of the fragile body to injury and death. Each of the three identical sculptures looks like an inverted boxlike sedan car that has mutated into a low divan, with six parallel bore holes drilled at one end, and human flesh colours. Projecting a sense of mass and weight that makes them look like they are carved from concrete, these enigmatic forms are always horizontal, but slightly tilted, as if accidentally dropped.

The silvery-pink video on the freestanding large gridded screen of vertical rectangles goes through many stages, from a shimmering disintegrating (Gerhard) Richter-esque portrait of a young man, linear images of a blinding photography light on a stand, shots of electric chairs, repeated loops of athletes injuring themselves in competition or acts of malicious violence, and a large patch of wrinkled translucent skin glowing in reptilian green and purple.

An androgynous sonorous computer-generated voice (accompanied by a Max Richter soundtrack) ponders ‘How will I die? Who will carry me? Who will feel my After Effects?‘ After thus mentioning digital software the voice tells us ‘I am water and cells, I am zeroes and ones…image is a hustle, image is a hustler…Who was that? An actor? Actors acting?‘ referencing binary mechanisms as a new reality that is all surface. It then intones ‘fake bodies, real bodies, dead bodies, live bodies, drunk bodies...’ acknowledging the corporeal vulnerability depicted not only of the physical form but also the unceertainty of the attendant ‘I’. One wonders: are the three sculptures variations of supine people? A form of sentient humanoid furniture?

With Incense Sweaters and Ice, Martine Syms (see interview here) presents a giant wall text painting (5 six letter permutations of how she personally speaks ‘GIRL’), 10 posters and a rotating series of videos based on an earlier performance featurung family and friends (usually involving assertive black women) that the visitor has to follow around the room in a circle if she or he wants to keep up.

Syms’ choice of immersive wall colour links to Alice Walker‘s book The Colour Purple to promote womanist values (black feminism {though in her interview Syms speaks of ‘black femininity’}), while assorted period posters—promoting pioneering black actors (like Sydney Poitiers) and their early films—have images from the performance film superimposed on top. Syms also has a free downloadable app that presents more film content on other media when a smartphone is held up in front of the posters.

The elegant circular seat of netting apparently represents black migration in the US, a low ringed cage that dominates the space so that viewer movement mimics patterns of black labour drifting back and forth between the northern and southern states.

The first work in the show you see, Sriwhana Spong‘s Now Spectral, Now Animal installation, is a complex presentation of filmic, sculptural and aural elements—much of it symbolic and connected to Spong’s enthusiasm for the writings of the Spanish Carmelite mystic, Teresa of Ávila (1515-1582). This noblewoman as a nun was a radical reformer who focussed on intensely devotional prayer and who antagonised the Papal legates by contradicting the Pauline doctrine that women should not teach.

On the other side of her gallery she presents her film Castle-Crystal aurally framed by the delicate sounds of bells. The theme of her display is elucidated by its title, with its transition from the ghostly to the bodily, from the spirit to the palpably material. Part of the film shows a table of succulent fruit (oranges, lychees etc) with their outer layering shells or protective skins being peeled off. The notion of successive layers to protect a precious centre is obviously important to Spong.

Teresa’s book, The Interior Castle, was described by one of her confessors (Fray Diego) as elucidating the following:

“…a most beautiful crystal globe, made in the shape of a castle, and containing seven mansions, in the seventh and innermost of which was the King of Glory, in the greatest splendour, illumining and beautifying them all. The nearer one got to the centre, the stronger was the light; outside the palace limits everything was foul, dark and infested with toads, vipers and other venomous creatures.”

Conland has selected four artists who greatly vary in conceptual emphasis—when contemplating what it is to be a speaking human. Yet the separating distinctions are at times subtle. (You could perhaps call this show Mystic Truths: Part Two. There are spiritual undercurrents.)

Spong advocates quietism, believing that we humans have souls that can (on a personal level) merge with a larger reality; Stark immerses herself in the raucous chaos of social media—enjoying many disparate juxtapositions positioned within a compacted layered conglomerate, even if she attacks them. Nashat focusses on surface, questioning if anything (even if vulnerable) lies beneath it; Syms is unquestioningly preoccupied with a female African-American self and her political, social and economic advancement.

There are many interesting cross-connections between the four works. For example, horizontal compression of language seen in Syms’ wall painting is matched by vertical compression of scrolled Instgram links in Stark. Or Spong’s fascination with interiority is a foil to Nashat’s notion of exteriority—which seems as if introspection cannot exist.

Honestly Speaking is a complicated show that really suffers from its lack of an information handout—as if the gallery’s investment in contemporary art education were only half-hearted—thus encouraging public hostility and alienation. Contemporary art in this country badly needs friends, and it is crucial exhibiting institutions make detailed information easily available, so it can be digested at home, with the visitor encouraged to return—to see for themselves whether the explanatory ‘spin’ is convincing, and worth talking about.