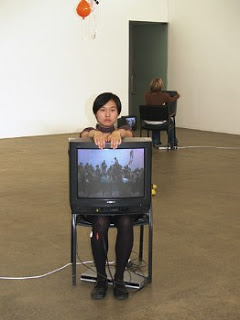 Frankovich is a gymnast preoccupied with linear vectors. She thinks in terms of vertical drops or lifts, horizontal conveyancing and diagonally angular ascents or descents. Her body is a point in motion co-ordinating with other point/bodies. Dot becomes line which transmutes into plane.

A Plane for Behavers (discussion continued)

We have here three public indoor performances, and another private outdoor event at Kitchener Place, documented on video. The four connect a bit like the installation placed in the main ARTSPACE gallery, its four monitors on chairs positioned to make up a square, a square plane suspended by its corners with remnants from the first work hanging above.

Frankovich is a gymnast preoccupied with linear vectors. She thinks in terms of vertical drops or lifts, horizontal conveyancing and diagonally angular ascents or descents. Her body is a point in motion co-ordinating with other point/bodies. Dot becomes line which transmutes into plane.

Such elements take on poetic metaphor. Plane becomes aircraft guided by pilots who are accountable for their actions above ground. Notions of responsibility are embedded in space. Dimensions within the aether acquire social properties.

Using limited means Frankovich has created a surprisingly layered presentation. Each of the three ARTSPACE rooms elaborates on different vector combinations: horizontal movement with no people is presented in the long space off to the far left with a stationary ‘dumb waiter’ shuttle that has a moving cable; in the big square gallery we see vertical/horizontal movement involving one person hoisting or many people carrying the artist; and horizontal motion (live but not videoed) and diagonal movement (videoed but not live) are enacted in the smallest room by pilots as agents for all three vectors.

There is also a fourth performance created several times a week where people sit in the four chairs in the main gallery for an hour, clutching the functioning monitors to their chests and resting the weight on their knees. They are here carrying not the artist but the moving image of the artist being carried. Their presence in the gallery makes viewing those screens more disquieting and confrontational, involving an unanticipated social dimension. The visitor remains a passive observer with some difficulty.

This artist is a shrewd manipulator of different logics. The video documentation, gallery sculpture (living or otherwise) and even undocumented works (not in the building, but on the website) are tightly meshed together so their relationships seem inevitable. A superbly planned and executed exhibition.