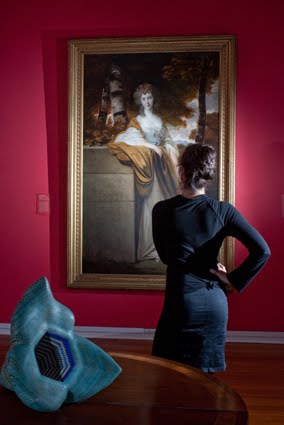 Yet as an overarching concept or metaphor for the entire exhibition, the most fitting is probably the small gallery identified as a ‘Glory Box'.

Beloved
Works from the Collection of Dunedin Public Art Gallery

The Dunedin Public Art Gallery is presenting Beloved, a major exhibition of key historic and contemporary works from its permanent collection and a more fully comprehensive book of the same name. Occupying almost all of the galleries on the ground floor, the exhibition, which is preceded by Christchurch Art Gallery’s Brought to Light: A New View of the Collection, extends a European and American history of radical permanent collection ‘rehangs’. Such a history began at least at the beginning of the millennium with MoMA and the Musée d’Orsay - a history which Karsten Schubert, writer of a history of the ‘museum concept’, has associated with a social and curatorial appetite for novelty.

As clearly stated by the gallery in their introductory exhibition label, Beloved sets out to be ‘contemporary’ in its presentation. As also explained, it highlights a ‘cross-section of works’, according to a ‘series of themes’ and aesthetic choices, on the background of a ‘vibrant set of colours’. Behind decal covered glass doors, a lively red semi-circular gallery collects a small and eclectic group that play on the title. This leads down a few stairs to a large blue gallery dedicated to ‘New Sensations’ and centered on Reuben Paterson’s fan-blown and shimmering bill-board sized work When the Sun Rises and the Shadows Flee (2005). It also leads to a ramp that initiates the theme of ‘Spiritualised’ art works. Around these are galleries dedicated to ‘Sense and Sensibility’ (a bright raspberry pink), ‘Far away so close’ (a pastoral green), ‘Glory Box’ (a vivid yellow), and ‘Proud Flesh’ (a dramatic black). The presentation tends towards over the top, or, as stated by the gallery, it is ‘opulent in its treatment’.

While radical in its approach, Beloved does not set out to shed new light on art history or challenge the assumptions and values of the canon. It is essentially a thematic, rather than historic presentation of key works. Exhibitions such as this have attracted criticism over the last decade or so, for, as stated by Schubert, they take a work out of its cultural and historic context and potentially put it into an interpretive vacuum in which it becomes impossible to gauge the artist’s original intentions. This seems a relevant, but harsh, criticism. Despite its sometimes baffling curatorial connections, Beloved succeeds in drawing attention to each work in an unashamedly visceral way. It highlights the almost hedonist pleasure of seeing iconic works in reality, up close.

Because of its ability to highlight individual works, the experience of the exhibition is likely to be personal. In my case it was in the gallery of ‘New Sensations’ that a group comprising Monet’s La Debacle (1880), Gretchen Albrecht’s Cardinal (1981) and Matthew Smith’s Mixed Roses in Two Jugs (c.1935) made an impression. At first, I stood staring, stumped by the unlikely collection of Monet’s Impressionism, Albrecht’s contemporary staining and her ‘hemisphere’ that echoes her interest in ecclesiastical renaissance painting and architecture, and Smith’s fauvist still life. Then I enjoyed seeing each of the three so starkly. I was taken with the wonderfully free and rich colour of Smith’s painting, especially his use of red and blue - noticeable alongside the same colours made uncompromising by Albrecht. Unexpectedly, given that Cardinal is one of my most beloved works, it was my experience of the Smith that I enjoyed most. More disappointing is the placement of another favourite, Milan Mrkusich’s Construction On Red (1982), with Jeffrey Harris’ Family (1981) and Arthur Boyds’ paint-laden Nebuchadnezzar Running in the Rain. The reasons I could not grasp.

One of the most intriguing themes is that of ‘Proud Flesh’, a celebration of the human body in its many incarnations. Set off by the blackness of the gallery space, a frieze of Christine Webster’s Black Carnival (1993) and Frank Brangwyn’s recently restored Unloading the Catch (1916-17) plays with the idea of flesh-as-spectacle: Webster’s erotic yet somehow-familiar characters and Brangwyn’s display of shirtless men muscling baskets of fish. Such an unexpected and even wicked pairing calls to mind a particularly fitting word - ‘ballsy’. Tony Fomison’s Mug Shot (1971), which I have always associated with his ability to grant those ‘outside’ of society with a kind of mythopoeic grandeur, also relates well to this theme while Fiona Pardington’s Choker (1993) with its troubling yet delicate depiction of necklace-like marks on a woman’s throat is highlighted - as is Heather Straka’s Repeat After Me…Amanda No 4 (2008), a welcome newcomer.

‘Sense and Sensibility’ is interesting for the way it engages historic and contemporary portraits of men and women in a kind of power play. It also includes furniture that might have graced the drawing rooms of certain subjects. Particularly striking is the way in which Thomas Gainsborough’s large portrait of Charlotte, Countess Talbot (c.1784) faces off Robin White’s Sam Hunt at the Portobello Pub (1978). Also a nice touch, Julia Morison’s Fair and Gay goes Lent Away (2005), with its Rococo sensibility and delicate layering of textures, appears above an eighteenth century (but not Rococo) sideboard and knife stand, notable for their luster, delicacy of design, and inlay. As well as highlighting the texture and design of Morison’s work, the furniture also succeeds in highlighting the sumptuous fabric and frills of the dandelion-blowing beauty of Charles Edward Perugini’s He Loves Me, He Loves Me Not. Amongst a group of works by men, including William Orpen in Après le Bain (1929) and Henry La Thangue in Self Portrait (1890), Yvonne Todd’s large colour photograph Founding CEO (2008) makes a jarring comment on what might be a ‘typical’ male subject.

The ‘Far Away so Close’ gallery is more straightforward in the way it depicts nature and the city. Perhaps most notable is Petrus van der Velden’s recently restored A Waterfall in the Otira Gorge (1891) which, appearing in the centre of this gallery’s main wall, is given a long line of sight from the gallery of ‘New Sensations’ and through that of ‘Sense and Sensibility’. It is clearly an icon of New Zealand art. Also recently and expertly restored, Jan van Goyen’s Beach Scene is freed from layers of yellowed varnish. Its thinly painted cloudy sky had to be significantly and painstakingly reconstructed, and it now glows in a landscape with various dark figures going about their work. Other works highlighted by this theme include Andre Derain’s Un Paysage (c. 1930-40), Stanley Spencer’s Melville Garden Village near Belfast (1951), Lucien Pissaro’s Le Moulin de Poulfenc à Riec (1910) and Laurence Lowry’s Lancashire Industrial Scene (1928).

Perhaps the most comprehensible part of the exhibition is the ‘spiritualised’ section where The Bosom of Abraham, the kowhai-covered neon lightboxes by Michael Parekowhai seem to lead inevitably to Colin McCahon’s The Five Wounds of Christ (1977-78). Around the latter are clustered treasures such as Jacopo Del Casentino’s Two Wings from A Triptych (c. 1340-50) - the oldest painting in the Dunedin Public Art Gallery’s collection - Zanobi Machiavelli’s Madonna and Child (1452-53), The Nativity by Pieter Fransz de Grebber (1600-1652) and Madonna and Child Enthroned by Garofalo (1481-1559). Yet as an overarching concept or metaphor for the entire exhibition, the most fitting is probably the small gallery identified as a ‘Glory Box’. In this room objects are ‘gathered together to attract and intrigue viewers’, assembled for their ‘aesthetic appeal’ across time and stylistic periods. Here shine some of the Dunedin Public Art Gallery’s finest watercolours, works by Rita Angus, William Matthew Hodgkins, Frances Hodgkins and Paul Signac, as well as prints by Rembrandt, Titian, Dϋrer, and Della Bella.

Everybody should try and see Beloved to encounter works that have long established the Dunedin Public Art Gallery’s collection as one of the most important in the country. After doing so, they can decide whether or not the exhibition pushes the boundaries of the rehang too far - and then post their thoughts on this site.