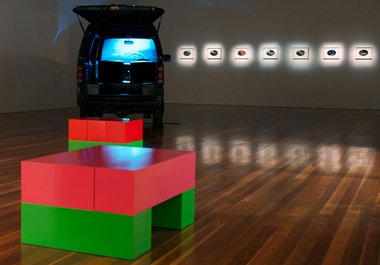 Anyone in the know seldom goes into the Aratoi Museum of Art and History in the Wairarapa to be surprised by the quality and freshness of its contemporary exhibitions. But ‘being in the know’ can be being in the ‘no,’ as Aratoi presents a thoughtful and beguiling contemporary exhibition with a subtle and genuine sense of wānanga, entitled Pūwawau.

Yes, Pūwawau is one of the best exhibitions I have seen in a while. It is something special to be met by such compelling work from artists unknown to me, all graduates or postgraduates of Massey University: Bridget Reweti, Terri Te Tau, Karangawai Marsh, Rongomaiaia Te Whaiti and the Mata Aho Collective (including Erena Baker, Sarah Hudson, Te Tau and Reweti). More importantly, however, it is something special to experience an exhibition with such an ability to broaden and strengthen our experience of contemporary art in this country, from the margins. (Isn’t that where it can happen?)

Pūwawau is installed in Aratoi’s main gallery: what I think of as Wairarapa’s version of The Turbine Hall. It can be an impactful space, with its sense of grand scale and potential for drama. However, it’s not an ‘easy’ space within which to mount an exhibition: its feeling of exaggerated length would not, and does not, work in every case. With subtle connections between well-placed works, it works for Pūwawau, extremely well. From the immediate draw of Bridget Reweti’s shining and jewel-like digital prints to the massive hanging of the Mata Aho Collective’s re-made Mink, the exhibition circles you around and carries you down, with movement rather than museological prompts.

At a dark end of the hall, each of Reweti’s oval and intimately-framed works are dramatically spot-lit. Their presentation is at one with their nature. In them I discover a kind of ideal land bejewelled and awash in the ‘glass’ of tuhua (obsidian). They reveal their coincidentally contemporary and antique quality, as I feel as if I am transported back to the light-filled and obscure world of the Viewmaster or, going further, to the special viewings of the stereoscope and to the dripping world of glass plate photography.

Tuhua was prized and widely traded by Maori in pre-European times and can still be discovered in the landscape, and found on mantle pieces. It is an unexpected lens for Reweti’s works as what I take to be early photographs of tourist sites are overlaid with sweeps of light, intensified in colour, and darkened at their ends, as if with colloidal fluid. They present a strange way of seeing and create something that is both beautiful and unreal. In Claude Glass two forest cabins are cast in a garden of blue, red and purple and in Black Glass, the welcome of an empty park bench sits in the strange light of a super-tinted garden. In Dragon Glass, two white swans demurely sit on a lake that could be painted with Monet’s water lilies. In Volcanic Glass, the world of obsidian is all encompassing, as layers of interiority charm the eye.

Also enjoying the dark is Terri Te Tau’s multimedia installation, Unregistered and Unwarranted. This work comprises a wall text, which is a piece of creative writing, and a small cargo-style van with its boot lid up and a driving-view playing on its windscreen. Te Tau’s work, like Rewiti’s, explores ways of seeing. Watching from within the van, or from outside it, we roll through the picturesque ‘historic’ town of Greytown and out onto SH2. All the while, a machine-oriented read-out is superimposed, completing a search-and-find analysis of vehicles, buildings and people. And the well-known ‘lullaby’ Hine e Hine is sung in bel-canto style as if it could be a rousing anthem for a soul-finding ride. We’re being taken on some kind of a journey, but its true nature and intent is unclear, it is beyond us as we cruise and ride.

Moving to Te Tau’s text, we read of Maui, who ‘lives in a district so close, we’re pretty much standing in it right now.’ He has arrived in his waka to pay the writer a visit. This present-day Maui speaks of a search for creativity and the need for shadows: ‘A shadow isn’t a place that you crouch in when you want to do bad things or when things go bad, it’s a place to steal away to when there are thoughts to be had…Have you ever sung to a crowd of millions while you drive from this place to that place? In the shadow of your waka giving it everything…no when the blinding light is on you, your creativity can’t survive…As of now, in my neighbourhood, there isn’t a shadow to be seen. It has become a utopiandistopian freak show. We travel in well-behaved rows but life is bland.’ In the light of her text, Te Tau’s van becomes a shadowy waka, and we are left to think about who sees us, what we see and what it is we seek.

Walking us on down, Karangawai Marsh’s installation He tara iti allows us to visualise the building blocks of language, of knowledge and of community. Aptly, the primary-coloured, square-made and supergloss-enamelled minimalist constructions are made from a section of paepae, the bench at the front of the wharenui, its front row of seats. Ambling forward they enact a process of building, from the ground up, enlightened by the proverb ‘kia kore koe e ngaro taku reo rangitira’ (so you my chiefly language will never be lost). With this work, the artist responds to Michael Parekowhai’s large Te Ataarangi sculptures that evoke an educational system, based on Cuisenaire rods, used to teach young children the relationships between numbers. More deeply concerned with Te Reo, Marsh’s work brings the importance of Maori vowels to my mind: their individual and cumulative meaning, and the way in which dipthongs combine them to move us through the spoken word.

Opposite and following Marsh’s installation are a series of four large oil paintings by Rongomaiaia Te Whaiti. They are informed by teachings recorded by Te Whatahoro Jury in the Waiarapa Whare Wānanga of the early 1860s. In each painting a young woman is embedded in, and emerges from, a background of deeply coloured chiaroscuro. She is presented as if in one of a series of poses, captured across time. Within and across these works, she sits with words on her lips, in her mouth, and on the air, her hands cradling thoughts, opening out, coaxing. Coming to, or going from her, on each painting’s surface, travel her symbols for sound and thought. She imparts something beyond story, something that is alive and mobile from one painting to the next.

Significantly, Te Whaiti’s series explores the processes, methods and journeys that lead to the creation of new knowledge, which is the kernel of the meaning and potential of wānanga. They are courageous works, not just because of their referent and concept, but also because of the way they are painted. They are on the cusp of something very important: creating and extending the oral in a visual medium.

Alongside and just beyond Te Whaiti’s works at the end of the hall, is the great extending tongue of the Mata Aho Collective’s Te Wharepora (House of Weaving). Hung dramatically from the high ceiling and running across the floor, it is the antithesis of the skeletal charred hulk of Hotere’s Black Phoenix, and similarly dramatic. Lush, deeply black and hyper-cloak-like, it is comprised of mink blankets sewn together and then brushed with a broom to subtly reveal a wide descending pattern of Vs, reminiscent of the woven tukutuku patterns that often decorate the walls of a wharenui. With the concept of the collective at its heart, Te Wharepora was made by many hands, and while it plays with the styles and materials of the contemporary marae, as seen in the now-popular mink blanket, it powerfully depicts the importance of a whare wānanga and on ongoing process of weaving new knowledge together.

Particularly pleasing to me is the fact that Te Wharepora is hung where Bill Hammond’s massive painting was most recently. Then, the hall was divided into two halves, one containing only Hammond’s work and otherwise empty, and the other the works of four artists. I am not saying Hammond’s painting is not a major work, but surely this kind of homage has been well paid by art museums already. Refreshingly, at the margins I can move on. What nicer and more exciting experience could I have than to discover Pūwawau anchored by its glorious woven mantle? 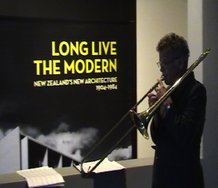