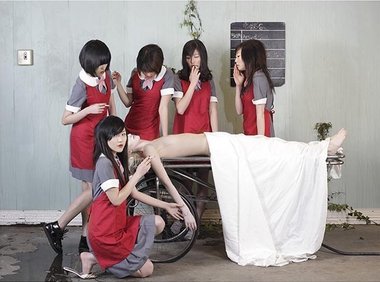 Is this the behind the scenes at a downmarket funeral parlour, some bizarre Third World hospital, a backroom organ-legging chopshop, or what?

Heather Straka
Do Not Resuscitate

Familiar from manga, anime, street fashion and pop art is the Japanese concept of ero kawaii - that disturbingly paedophilic hybrid of Sanryo kitschy Hello Kitty cuteness and kinderwhore Lolita coquettishness that along with Japan’s economic power has spread throughout Asia to varying degrees. Perhaps it was an unconscious strategy for appearing non-threatening to preeminent Russian and American interests during the Cold War, or a parallel to the perverse obsession of a certain type of British Conservative with public school girls in uniform. The jury remains out.

It is an aesthetic that pervades every aspect of the photographic works making up Heather Straka’s Do Not Resuscitate at the Jonathan Smart Gallery. Straka is best known as a painter of intense detail, the canvasses worked up from carefully posed photographs. Recently the strain of the detailed brushwork has caused Straka to reconsider her process and move back a step to work on photography.

The exhibition falls naturally into two sections. The first is a wall of individual portraits of young female Japanese, Chinese and Korean models, saucily posed mid pouty puff of cigarette smoke like a shoddy faded Pat Pong advertisement for sexual services, dressed in immaculate and slightly tacky uniform of a manicurist, hairdresser or train attendant. Their perfect, exaggerated makeup, hair, poreless skin and the Preraphaelite sharpness of image emphasise the natural tendency of young Asian women toward a kind of porcelain doll neoteny (retention of childlike features, such as those exaggerated in manga and anime).

On the opposite wall is a tableau vivant reminiscent of the work of advertising-inspired neo-Baroque photographers like Jeff Wall. The same girls are gathered, still smoking, around a blonde and decidedly western (female, but boyish) half-draped nude ‘corpse’ on a gurney in a shabby, nondescript room. Is this the behind the scenes at a downmarket funeral parlour, some bizarre Third World hospital, a backroom organ-legging chopshop, or what? The air of neglect and decay is further enhanced by the ropey, leggy ivy strategically winding through the scene, which along with the draped sheet/shroud, strongly suggests the tropes of nineteenth century Academic painting - something that Straka has long delighted in playing naughty games with.

Is it a sort of self-conscious ironic revision of Orientalism? Perhaps that is going too far. The visual pleasure of the retinal candy is more than sufficient without trying to draw out readings. Yummy.