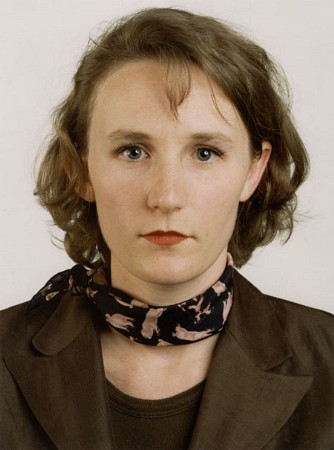 Internationally acclaimed German photographer Thomas Ruff rarely has his work exhibited in New Zealand though he gets a lot of coverage in the international art press, and so most art lovers here know of him. This Gow Langsford exhibition brings eight examples from his back and more recent catalogue. They demonstrate in a limited way (because you don’t see each series for background context) not only his interest in strict procedural method, but also for the viewer, the value of direct experience in a gallery. What the works have to offer because of their scale and (in some cases) acuity simply doesn’t transmit to reproductions in magazines or online.

What am I getting at here? Well, because of their size (2010 x 1650 mm), you are free to really look at these faces. You can linger and dwell on their detail in a way that you never could with a living human being standing in front of you - unless you don’t care about being rude. Here your voyeuristic intrusion is welcomed, with the end result that you can’t help but notice that these people up close and enlarged are not pretty.

You can see inflamed red patches of skin, mottled blemishes, epidermal bristles, infected striations and tiny pustules. It is like reading Jonathan Swift’s Gulliver describing the bodies of the giant people of Brobdingnag, or in turn, the Lilliputians’ previous description of him. The human physiognomy magnified becomes repulsive. There seems to be a malicious glee behind Ruff’s ‘objective’ honesty and the fact you will keep coming back to zero in for another look.

In terms of impact and sheer ocular escapism however, it is Ruff’s very large (2600 x 1880 mm) picture of a night sky, borrowed from an observatory archive, that is the star (so to speak) of this exhibition. It is mesmerising in its evocation of the infinite, even with a few fake stars the artist has mischievously added. You can really immerse yourself in its ambiguous tunnelling space of thousands of glowing pin points.

His initially crisp found images now go beyond blurring. It is not just a matter of vague, soft edges, as if vaseline has been smeared on the lenses; the quiver is horizontal, a slight shadowy aura - a calculated overreaction where Ruff seems to be laughing at the fickle vagaries of desire, and his attempts to capture it. With digital technology altering the acuity he sends up priapic-lensed photographers like say, Thomas, the leading David Hemmings character in Antonioni’s ‘Blow Up.’

Oddly the most interesting works in the show are small, some blurry 1994 portraits that are halfway between the above two extremes. They were created using a pre-computer Minolta montaging technology where hybrid ‘identikits’ were developed by the German police so that ethereally blurry portraits of new identities were constructed out of old ones (a ‘magic mirrors’ system of blending) with strange ghostly auras - like genealogies with children replicating the individual features of their same-gender parents. There is an appealing mix of antiquated (Flash Gordonish) sci-fi in this primitive portrait cloning.

This show is a good introduction to Ruff’s practice but it really barely scratches the surface. There is one photograph of a building included I haven’t discussed, while not shown are themes such as his schematic abstract ‘drawings’ of mathematical parabolas, profiles of the rings of Saturn, and swirling images of intensely saturated coloured light on what seems to be the surface of rippling water. Ruff’s curiosity in unexpected subjects is part of his appeal, but even a genre as traditional as the portrait he has succeeded in transforming.