The Art of Bodily Immersion 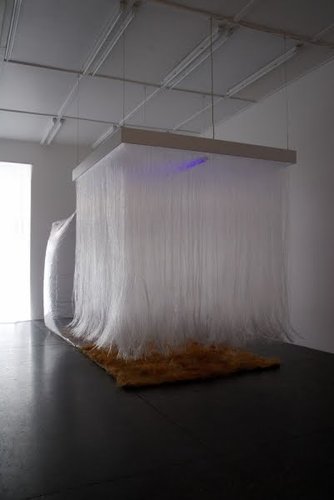 You are offered the chance of stripping down to your underwear and walking through them, experiencing the straggly vertical filaments, shiny plastic strips and swinging wooden balls as they tickle, scrape, flap or bang against your chest, shoulders and bare legs.

Designed to help break down any separation or distinction between viewer and art object, Jim Allen’s Small Worlds - a recreation of a pioneering and highly influential project (in Australasia) from 1969 - provides an immersive experience of tactile sensations for your body to enjoy.

Just inside the doorway of the darkened space, an inflated cube of shiny transparent plastic tells us that here, where the eye can go, the body cannot follow. It’s a teaser and not penetrable. Further inside is a gap between two horizontally suspended squares near the ceiling, supporting densely hanging lines of thick nylon thread and tubes radiating ultra-violet ‘black’ light. In this gap alternatively the body follows where there is ‘nothing’ for the eye to see.

The main attractions are the two suspended cube-shaped, fibrous sculptures. They glow internally from the UV, while their translucent stringy sides are raked by the diffuse light coming in from the entrance. You are offered the chance of stripping down to your underwear and walking through them, experiencing the straggly vertical filaments, shiny plastic strips and swinging wooden balls as they tickle, scrape, flap or bang against your chest, shoulders and bare legs. At the same time you can feel the crunchy shredded flax or smooth cold floor under your bare feet.

In one of these works Tribute to Hone Tuwhare, Allen has the early Tuwhare poem ‘Thine Own Hands Have Fashioned‘ transcribed on to long strips of paper that, with the long nylon ‘hair’, are hanging from the platform ceiling so that they glow under the purple light. A celebration of the senses, the rich language enunciates the flattering words of Delilah as she calls to her lover Samson:

The original version of this work was made for Barry Lett Galleries while Allen was Head of Sculpture and Associate Professor at Elam (1960-1976). He made it just after he got back from a trip to Europe, England the States where he had been visiting art schools and meeting various artists. He had become interested in more open-ended notions of sculpture where the viewer’s sense of self began to merge with a sculptural environment they entered into, so that they were overwhelmed by the visual, tactile, aural and olfactory sensations it provided.

This sort of project made sculpture (as Christina Barton has described in an informative article in the first issue of ‘Midwest’ magazine) ‘an activity rather than an object’ and lead to a series of interactive performances with groups of students. This new version of Allen’s Small Worlds continues a series of recreated exhibtions presented in 2006 at Michael Lett Gallery (Poetry for Chainsaws and Hanging By a Thread) and St. Paul St, AUT (O-AR).

Of the original installations made in 1969 and 1970 in this series, only New Zealand Environment No.5 remains, a work which Allen showed in Mildura in Australia in 1970 and which is now part of the collection of the Govett-Brewster in New Plymouth. Its lightly covered scrim enclosure and contents is more rurally focused than the earlier works because of the olfactory sensations it generates, presenting oily wool, resiny woodchips and woolbale hessian - along with a few hanging nylon threads, barbed wire and a pale green neon light. I think I like these Small Worlds works more. They, in comparison, seem more urban, if not slightly nightclubby or industrial, with the black light, shiny plastic strips and dense nylon lines.

Like the earlier Emmerling curated version of O-AR at St. Paul St, this is a wonderful exhibition - not so much an object as an experience or ‘situation’. One of the year’s highlights and not to be missed.