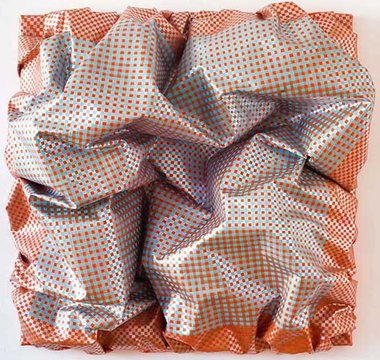 This is primarily a show of grid painting. The individual works have, as a foundation, poured and dropped paint to provide textural interest, and in turn loose grids are built up in translucent layers and gestural strokes of translucent bubblegum colour.

Followers of Miranda Parkes’ career may recall that the first of her work to gain notice were the rouched and rumpled canvases that resembled technicolour sheets left bundled rather than folded by a lazy homemaker. They sagged from their stretchers in blatant defiance of the conventions (or clichés) of traditional painting and suggested a space between painting and sculpture, or even an eventual transition to the third dimension.

Then gradually over time the canvases stretched, flattened and tautened in response to some unseen exercise programme instituted by the artist. The Op/Pop Art paintwork remained hard-edged and geometric, but as the current exhibition Cracker reveals, this too has undergone exploratory evolution to become more expressive and biomorphic, and in some cases exploiting Op Art effects even more extensively than earlier work. But what does this signify? What new directions does this body of work suggest about Parkes’ practice?

Although there is a bunched-up work (Tanker in silver orange and blue cheques like some over-the-top Vivienne Westwood fabric print) and a video work (Jetty, filmed at Akaroa on Banks’ Peninsula) in the exhibition, this is primarily a show of grid painting. The individual works have, as a foundation, poured and dropped paint to provide textural interest, and in turn loose grids are built up in translucent layers and gestural strokes of translucent bubblegum colour. These most directly remind of the Byzantine decorative effects of Austrian painting - specifically Gustav Klimt and Friedensreich Hundertwasser. The latter, of course, has very specific inferences for New Zealand, and was deeply influenced by the former.

One large work, Doozer, achieves unity through a dispersed pixilation of small yellow oval motifs throughout the composition. This binds the painting together like egg binds together a cake and the effect is reminiscent of the visual tests for colour blindness. Another protean work, Mozer, coaxes interest from the nooks and crannies of a loosely painted grid. It reminds me slightly of the topological “three colour map problem” in which any pattern overlapping outlines cannot be filled using just three colours without two adjacent zones eventually being filled by the same colour. It is predominantly variants of fleshy pink with windows of tallow on green and purple on red.

A small ceramic work called Zapper - roughly ashtray size and shape - forms the basis of an Op Art grid pattern in red and blue that sets up interesting interference pattern buzz when viewed from a distance. It lacks, however, Op Art’s technocratic aesthetic programme. The ceramic basis lends a homey and eccentric roughness - little patches of insecurity and vulnerability scattered throughout the overall confidence of the handling.

A further work Jiggle Grid interprets the grid as a matrix of irregular, roughly circular blobs of paint on a silver plain, with each blob being carefully worked up as a sub-grid in hard candy colours and patterns. A further grid called Blob Grid consists of a loose, colourful matrix in which circular areas have been cut and rotated. The simplicity of that strategy might at first seem like a liability in a context that favours the conceptually more elaborate, but aesthetically it brings its own formal strength.

Perhaps the most interesting interpretation of the grid is Jetty, with its shaky hand-held digital video projection of a metal grating submerged in rippling water. However I am not entirely certain that this adds much to the paintings. And because the paintings are dispersed through two gallery spaces, and the projection shares room with just two modest sized works, it seems a trifle distracting and even diluting in the overall exhibition context.

In a sense, these polychromatic spiderwebs and mazes represent a flâneur voyage around the painterly plain, wearing strata, trace and art-historical reference openly on their sleeves. The visual impact is at once bold and simultaneous in a visual equivocation of style, media and process. I can’t help thinking that Cracker represents a transitional phase in Parkes’ career. I doubt we will be seeing baggy paintings again for a while.