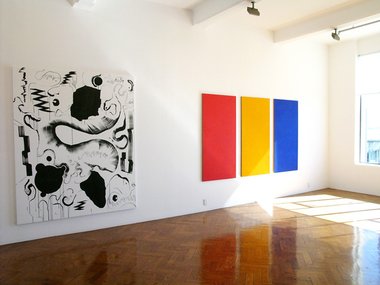 Such stock shows often allow us to spot things we might have originally missed, a chance to stumble on new connections - especially with more historic work that may be owned by an artist's family, not an institution. A good opportunity.

Group show
From the Stockroom

This stock show presents seventeen works from ten artists. It includes some surprises and some revitalisations within a new group context.

The Billy Apples haven’t been displayed before, three small Xeroxes (from 1966) on coloured canvas that looks like gingham tablecloth patterns. The smudgy photocopied ink shows a grinning apple positioned alongside an inert Idaho spud, while the title ‘Apple in Idaho’ refers to the (now) proper names of people, vegetables, and of course, North American states.

Next to Apple are three Ava Seymour framed photographed collages with super finely-tweaked edges. The outer contours of her paper shapes you need to examine closely to grasp the nuanced precision with which her scalpel has moved. From a cutting virtuoso.

Peter Robinson’s two large calligraphic paintings look better in a group show than in a solo display where they don’t stand out as black and white statements, with so much white around them. Here with some colourful Mrkusichs nearby, they seem activated spatially and become highly energised grotesque landforms - quoting earlier, non-landscape, ‘quantum’ Peter Robinsons.

Julian Dashper’s solitary illuminated neon tube on a white wall with hanging wires on either side presents itself as a delicate - but glowing - linear drawing. The wires could almost be pencil lines within a calculatedly ‘minimal’ statement.

Opposite the gallery entrance is an early Gordon Walters koru painting from 1965. It intrigues because of the awkward top and bottom edges which explain the title, Black on White. It is definitely not vice versa, like the more resolved and spatially ambiguous works he later arrived at.

Of the two very different Mrkusich works, the smaller single-panelled blue painting (as opposed to the three panelled, three coloured one) has an intriguing tension by virtue of a symmetry at the top and an asymmetry at the bottom. It oddly twists the central field.

In the back room a mid-seventies Albrecht is a gorgeous stack of floating, horizontal stains, oddly divided into two halves, one placed above the other, while nearby a big black Hotere of shiny corrugated steel has its two panels spaced apart to form the vertical beam of a cross. Its arms consist of horizontally cut slots peeled away to reveal bright orange painted on the back.

There is also an oddly sinister Boyd Webb, with the clustered stamens of an ochry brown fabric flower in a shadow - exuding menace.

In thinking about shows like this, I tend to prefer solo exhibitions over group displays, and of the latter, thematically tight presentations over promotion of unsold stock. Yet the latter often allow us to spot things we might have originally missed, a chance to stumble on new connections - especially with more historic work that may be owned by an artist’s family, not an institution. A good opportunity.