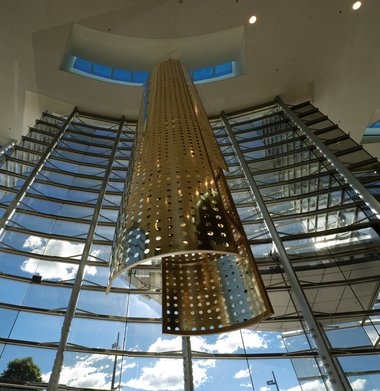 Like primitive deities, Drummond's kinetic sculptures are enigmatic, implacable, inscrutable and suggestive of power intimately interwoven with the archaic, anarchic natural world; an engineer's theistic efforts to impose his will on the cosmic order.

Although Drummond has stayed with Christchurch, the Garden City has rarely held faith with him outside a close network of supporters, engineers and aficionados.

Can one sculpt philosophy? The occasion of the survey show of sculptor/photographer Andrew Drummond’s work, is without a doubt an art historical event. Drummond, like Bill Culbert and Neil Dawson, is that rarest of enigmatical creatures; a New Zealand sculptor who has a presence in the greater world beyond an occasional bashful ripple beneath an unusually fortuitous stellar conjunction. He should be busy fluffing his laurels, because he certainly would be entitled to rest on them, though God knows Fame must have stopped off for a kip on the way while delivering them.

Born in Nelson in 1951, Drummond studied at the Palmerston North Teachers College and Canada’s Waterloo University, has shown in Australia, Canada and the UK, and he has collaborated with the composer Chris Cree Brown and the poet Bill Manhire. His work, to my eye at least, has close resonance with that of German artist Joseph Beuys in his shamanic use of found and abject materials as allusions to energy flows, memories and personal narratives.

Perhaps this stems from Drummond’s meeting Beuys at a seminar in Edinburgh in 1975, and one can see the parallels between Beuys’ lumps of fat and Drummond’s pieces of coal and beeswax as symbols of potential energy and transformation. This is also true of the deeply personal nature of Beuys’ and Drummond’s work. Beuys created a personal mythology of his dubious crash as a Luftwaffe pilot over the Crimea, claiming to have been saved and nursed to health by local shaman who wrapped him in fat and felt. Drummond’s constant references to his body and walking stick motifs may well invoke the illness which caused his limp (in some ways almost as much a well known trademark for the artist as Beuys’ hat).

At other times his work resembles a steampunk contrivance from a mad scientist’s laboratory, Heath Robinson, or indeed something entirely magical. These contraptions may well be body surrogates evolving from Drummond’s incarnation as an environmental performance artist in a white boiler suit in the 1970s and ‘80s. These happenings proved highly controversial, especially Onto Skin (1977) and Crucifixion (1978) in which a latex second skin was torn from the artist’s naked body like a shed chrysalis, the latter while lashed to a St Andrew’s cross. The machines similarly recall the functions and actions of the human body - breathing, digestion, and movement. This to my mind is kabalic - like the creation of a homunculus or golem, or even a mechanical god.

The god machine is a hangover from the nineteenth century’s cargo cult deification of all things mechanical in the second phase of the Industrial Revolution. Consider H. G. Wells’ 1894 short story “Lord of the Dynamos” in which an indigene engineer from the edge of the empire begins to worship one of the machines he tends, to the point of human sacrifice (consider a similar usage, machine as Moloch, in Fritz Lang’s Metropolis). Then there is the earlier strange real-life saga of John Murray Spear, who in Massachusetts in 1854, guided by the spirits of Emanuel Swedenborg and Benjamin Franklin, built a machine ‘Messiah’. A contemporary describes it:

From the center of the table rose two metallic uprights connected at the top by a revolving steel shaft. The shaft supported a transverse steel arm from whose extremities were suspended two large steel spheres enclosing magnets. Beneath the spheres there appeared [..] a very curiously constructed fixture, a sort of oval platform, formed of a peculiar combination of magnets and metals. Directly above this were suspended a number of zinc and copper plates, alternately arranged, and said to correspond with the brain as an electric reservoir. These were supplied with lofty metallic conductors, or attractors, reaching upward to an elevated stratum of atmosphere said to draw power directly from the atmosphere. In combination with these principal parts were adjusted various metallic bars, plates, wires, magnets, insulating substances, peculiar chemical compounds, etc… At certain points around the circumference of these structures, and connected with the center, small steel balls enclosing magnets were suspended. A metallic connection with the earth, both positive and negative, corresponding with the two lower limbs, right and left, of the body, was also provided.

That certainly sounds like a Drummond construction - has he really been around that long? Like primitive deities, Drummond’s kinetic sculptures are enigmatic, implacable, inscrutable and suggestive of power intimately interwoven with the archaic, anarchic natural world; an engineer’s theistic efforts to impose his will on the cosmic order.
Although Drummond has stayed with Christchurch, the Garden City has rarely held faith with him outside a close network of supporters, engineers and aficionados. The unnecessary hoo-hah of small-minded vulgarian kleinburgers that prevented the construction of his Millennium Bridge in Hagley Park (thanks again, Christchurch) had the faint suggestion of thirty silver shekels jangling in the moonlight. This exhibition is something of a long overdue karmic redress for a city stalwart. Drummond deserves it.

For some time CAG has been giving us a foretaste of what was to come, in the form of two enormous works in the cavernous foyer: Viewing Device, Counter Rotating (2000-2010) - two rotating colander-pierced metal cylinders, one within the other like pieces of Meccano, driven by a compressed air engine (in a sense, it breathes with its “air muscle”), and Counter Rotating Earthing Device (2006) - two pivoted metal arms circling like the hands of a clock in opposite directions, electrically discharging periodically with sparking arc and loud bug-zapper crackle to a metal plate one the wall. Irresistibly one thinks of Fernand Léger’s Ballet Mécanique, and the self-destructive contraptions of Swiss sculptor Yves Tinguely or the American collective Survival Research Laboratories - but of course Drummond builds to last. In the age of built-in redundancy to justify endless upgrades, his robust mechanicals can continue their smooth trucking-on and ticking over for years.

To a certain extent, it’s art for the boys as much as the Beuys. I have long admired Drummond’s photographs and installation evocations of coal mining on the South Island’s West Coast. If W. H. Auden hadn’t been a poet, he would have liked to have been a mining engineer - such was his love of the heavy machinery. One wonders if something similar could be said of Drummond’s Tom Swift-esque enthusiastic obsession with the physical and engineering principles of big boys’ toys. There is a far greater sense of ‘art’ here when compared to the cheap theatrics of Len Lye.

The exhibition itself launched with all due fanfare and is an impressive beast, focusing on the period from 1980 to the present and taking in performance art, sculpture, installation, drawing, photography and those fiendish kinetic devices. One can roughly divide it in two. Half consists of the static and surreal installations of the abject natural and manmade materials that most closely resemble Beuys’ oeuvre. Great attention has been paid to lighting in the galleries to maximise the drama of the shadows cast on the walls. There are some wonderful visual puns, such as in one work where the similarities of a swan’s neck and the curved handle of a walking stick are played upon.

I was much taken by the partly unsealed frames in which thin foils of slag metal (as always, the ghost of West Coast mining is never far away) is left to slowly corrode - which is a more polite and less ‘Action Painting’ equivalent to Andy Warhol’s ‘piss paintings’ and a delicate essay in natural process. I also love the quasi-museological bell jar works, which act as a sort of transition to the machine gods of the second half. Welcome to Willy Wonka’s Inventing Room, keep your hands behind your back.

Things move, and spark, and crackle, and squeak, and gurgle, and belch, and fart, and trickle, dominated by a gorgeously grotesque device of beakers and tubes of coloured water in scaffolding, into which air is seemingly pumped at random. Damn thing kept making me want to rush to the bathroom, but at the same time I wanted to stare for hours - ah, the dilemma. And then there are the funnel shaped devices with their peculiar acoustics. The machines, like exhibits in some particularly warped science and technology museum, are raised on specially build matching plinths which lend a subtle uniformity and pleasant sense of balance in what is already a fairly busy space inclined to be distracting or overwhelming.

This has got to be the show of the year, and Andrew Drummond is a double geniusburger with cheese. One cavil, however; all the labelling ends up clustered together on the wall, often many metres from the actual works. I had a hard time working out which was what, and in the end I gave up entirely. Thankfully such is the visual wonder of the show, the labels don’t really matter all that much.

Images courtesy of the artist and Christchurch Art Gallery.