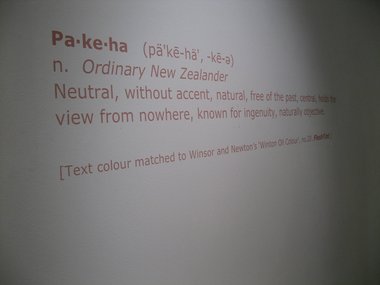 No marks for subtlety to Trolove here but I was disturbed by how long it took for me to realise I wasn't reading a standard dictionary definition (which arguably more rightly is ‘white New Zealander' or perhaps now more appropriately ‘not Maori'). The lack of identified source for the definition is disturbing, which is perhaps the artist's intention. As treaty negotiations have long made us aware it is the very question of asking who is defining words that is at the heart of having a cultural binary concept of biculturalism: Maori and other.

Jack Trolove
Ghost Paper: Thoughts on being an unsettled settler

Marae style, you are asked to take your shoes off and enter the gallery barefoot. Yet instead of cool wood or concrete under feet you walk down a pathway of grass lawn. The kind you can now buy rolled up by the square metre. The path ends rolled up neatly at the other end of the space. Another pathway, like a suburban cul-de-sac leading off it, travels down the L-shaped gallery’s other leg.

The gallery is empty up to this point, but these gestures were enough to get me thinking from my feet up about Maori connection to the land versus the transplanted Pakeha settler’s rolling out of suburban lawns, paths and streets. How we continue to treat the country like a camping site. Its familiar ground, but elegantly expressed, and almost two weeks into the show’s run this commercially grown so-called natural turf, like New Zealand’s colonial heritage and imported flora and fauna, is showing remarkable resilience.

On the wall above the turf rolls is printed a definition of the word ‘Pakeha’. The principal definition is given as ‘ordinary New Zealander’ and its further defined as ‘neutral, without accent, natural, free of the past, central, holds the view from nowhere, known for ingenuity, naturally objective’

No marks for subtlety to Trolove here but I was disturbed by how long it took for me to realise I wasn’t reading a standard dictionary definition (which arguably more rightly is ‘white New Zealander’ or perhaps now more appropriately ‘not Maori’). The lack of identified source for the definition is disturbing, which is perhaps the artist’s intention. As treaty negotiations have long made us aware it is the very question of asking who is defining words that is at the heart of having a cultural binary concept of biculturalism: Maori and other.

Rather unnecessarily Trolove feels the need to give this installation the subtitle Thoughts of being an unsettled settler. No one, least of all the artist is ‘naturally objective’ and here the unsettled artist provides an unsettling definition of a word. Yet of course there are plenty of Pakeha who feel perfectly settled, planted, and defensive against the notion that they might ‘hold the view from nowhere’. Trolove opens this all up for reaction rather nicely, but I remain disturbed by the lack of personal source given to the definition.

Below it, referring to the brown colour of the wall text, is written ‘text colour matches to Winsor and Newton’s Winton oil colour Flesh tone’. Here then an attribution is made, neatly making us aware that even colours come with their own imported subjective registers. I was reminded of Wayne Youle’s Twelve Shades of Bullshit  and this text leads neatly onto the next part of the work’s journey.

Running down the second leg of the gallery on either side of the path is a series of paper banners hung from the ceiling, akin at least in this setting to a European boulevard of trees. They carry at head height smudged floating faces in charcoal, as if emerging from the white. These faces - evoking the old so-called objective realism portrait tradition that stretches from Peter McIntyre back to Goldie - vary widely in their age and look, and I found it difficult to discern their race. They have been dislocated from their past. These are the ghosts of the title, suggesting those within the parchment of the treaty, and the ancestral portraits of the wharenui.

Disembodied, they stare sternly ahead, like the 19th century cameo photographic portraits which were important to Maori and Pakeha alike for their embodiment of people. The ghostly experimentation with smudged realism with charcoal is reminiscent of Lorene Taurerewa’s work and its reference to the Victorian photographic sitting. As a medium, charcoal also plays out a performative place in the exhibition and here also neatly evokes its source as burnt wood.

The ordered procession of heads leads to a nicely framed film of waves breaking on that troubled foreshore of ours. Yet just as the lawn at the end of the other leg of the pathway was rolled up, the film has been set in reverse, so the waves’ power too is rolling back out, away from the land.

This installation has been well thought out as to all the materials used. I like its openness and the way it sidesteps being polemical, whilst still provoking a response. Yet the uncertainty of its position is also a weakness. I find it disturbing that the portraits as with the wall text for example aren’t attributed - if they aren’t the artists’ whakapapa, who are they? There’s also an inconsistency in the approach to the portrayal of the faces that suggests Trolove is still exploring her ideas about their execution.

In being unsettled in this way the work provides an interesting performance experience and would appear to seek to be ungrounded - something the subtitle of the work and an accompanying catalogue essay by the artist seem to set out to balance. As is so often the case the work should be left to speak for itself.

Readers interested in making art that involves close scrutiny of pivotal historic events may be fascinated by this Dutch project ...

Readers interested in making art that involves close scrutiny of pivotal historic events may be fascinated by this Dutch project about Golden Bay
http://www.viewongoldenbay.com/