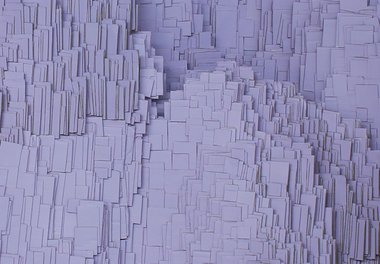 By coincidence the work also resonates beautifully with the grey slatelike floor tiles underneath it which have rippled lines, like water. It appears to be rising out of a rectangular lake. A version of Mitre Peak.

Ruth Thomas-Edmond‘s mountain-shaped, pale mauve sculpture Heap - made of hundreds of glued together corrugated cardboard rectangles - here leans against Te Tuhi’s ‘drawing wall’ to become a drawing in its own right, It is an improvised exploratory process in 3D. Against the planar support it appears to be a sort of stack flipped up on its bottom edge so that its weight can reposition the mass’s centre of gravity. What would naturally be aligned horizontally is now vertical in its stratification. Its painted facets make it look crystalline or of flaky flinty limestone, while also alluding to the eighties work of British artists like David Mach and Tony Cragg. Possibly also Pueblo cliff-face architecture.

Though very beautiful with its gentle bending bone-like curves and dipping incremental gradients, there is still an implied sense of continual process in operation, a suggested instability as if all is not geologically finalised. The unpainted ‘rear’ sides show a variety of brown cardboard types, as do the top unpainted edges.

Yet this is a wonderfully satisfying craggy form to contemplate. It has a caressing optical tactility and an organic unity that pulls you in to linger over detail. There are undulating gullies, abruptly edged ridges and eroded-but-surging lava flows that you look down upon as if flying past in an aircraft.

Thomas-Edmond’s choice of colour here is also very shrewd. It hovers between the natural and the synthetic, a pale purple that could almost be a softer grey (and so ‘realistic’) or a brighter mauve (industrial and ‘artificial’). It suits the perpendicular card shapes and the procedure of construction by declaring its method of assembly and not concealing it, as well as announcing its own ‘slightly loud’ paint application. One wonders if there might be some same-sexual symbolism involved, some socio-political intent?

By coincidence, on a narrative (nonsymbolic) level, the work also resonates beautifully with the grey slatelike floor tiles underneath it which have rippled lines, like water. It appears to be rising out of a rectangular lake. A version of Mitre Peak.

The title Heap implies something more chaotic than say the word ‘Stack’, yet Heap (the sculpture) impresses with its compositional control. The landform has visual overtones of a bending, arching, live, very muscular animal - perhaps a moving beast in cross-section - that is like the swelling trunk of a tree. The rectangles are also like the overlapping scales of a reptile or armadillo, introducing a sense of feral vitalism when co-ordinated with sinewy form. The restless agitation of the surface, its elegantly sweeping and coordinated undulations, and an odd ambiguity that allows the mass to be seem protruding through the plane of the wall as much as pushing against it, helps make Thomas-Edmond’s ‘drawing’ compulsive and highly memorable viewing.

Photographs by Gareth Price and courtesy of the artist, Anna Bibby Gallery and Te Tuhi.