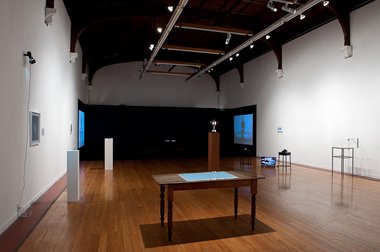 The Chained Lady, The Microscope & The Southern Fish
Curated by Tessa Giblin

The somewhat cumbersome name of this exhibition is fairly arbitrary - three unconnected constellations; Andromeda (Northern Hemisphere), Microscopium and Piscus Austrinus (Southern Hemisphere) - and a similarly dubious methodology applies to the show’s curatorial mandate, an improvised catch-all that says little about the disparate art it attempts to assimilate. There is some loose talk about Claude Levi-Strauss’s thoughts on the development of myth (a curatorial blank cheque, though Andromeda is the only ‘mythological’ constellation in the title), but frankly it would have been better if the curator had simply said “here is some art I find interesting” and left out the white noise - much made by appropriating the language of science, without the spirit.

The curator is Canterbury University School of Fine Arts graduate Tessa Giblin, now Curator of Visual Arts at Project Arts Centre, Dublin. The show is a remix of a previous exhibition curated in Dublin by Giblin and Argentine artist Amalia Pica, into which various Canterbury staff and students have been inserted as part of the university’s Platform festival.

Stripping away the adipose curatorial blancmange, the interesting bit is the art, which is fascinating - albeit conceptual: I have to admit I am more visual than cerebral in my aesthetic instincts. One is first struck by Gareth Moore’s (and I’m guessing the CA after his name refers to Canada rather than California) beautiful Map (from Uncertain Pilgrimage) (2006-2009) - looking like an almost exact facsimile of a National Geographic-type map, except that like the navigational chart in Lewis Carroll’s “Hunting of the Snark” it is completely blank. A one joke work, to be sure, but a good one. Elizabeth Price (UK) contributes a similarly simple but effective conceit in TROPHY (2000 onward), a stainless steel cup engraved with the names of every gallery it has been exhibited at.

I am always a little dubious of ‘documentary’ art because it is usually debatable as to how much actual art is involved, though I was charmed by Michael Fortune and Aileen Lambert’s (Ireland/Eire) The Banshee Lives in Handball Alley (2005) - a nine minute video recording two young boys recounting their improvised Celtic-specific playground mythology. I was also intrigued by Pica’s Moon Golem (2009) in which a small circular mirror reflects a spotlight onto a framed photograph of a very small art work taken to the moon by one of the Apollo missions. This was accompanied by a wall text about the lunar work (a diminutive memorial to those astronauts killed on the job), but I found I was more interested in the moon work itself than Pica’s metaphrase of it.

Kevin Atherton (Ireland/Eire) attracted attention with In Two Minds (1978 / 2000) in which young and old video versions of the artist frenetically interrogate each other (admittedly not an uncommon technique these days - one recalls Douglas Gordon and his De Niro Taxi Driver mirror rant at the Gagosian). The effect is arresting.

I’ll ignore the Rorschach cards on the wall because I don’t see the point (they are aesthetically unimportant and distract from the art) and move directly to the Kiwis.

Alice Baxter’s Nina Kulagina (2010) is a quintessential example of ambitious student work - a vitrine containing a scattering of safety matches, a live video feed of which is sent to a monitor. The video feed (time based) emphasises that the matches are utterly static, so the first visual thrill passes quite quickly, and I rather resent the number of art historical references I am expected to carry in my head to make sense of it

Sculpture lecturer Louise Palmer’s To the Is-land (polychromos) (2008) is a facsimile of a Janet Frame book jacket done in coloured pencil. It is nice enough with its implied New Zealandness and allusions to reproduction and readymade, but I much prefer her drawing Pigment Explosion, 149 (2010) and the lyrically graceful and exquisitely piled powdered pigment of Is-land (2010).

Canterbury’s design BFA’s, lead to the charge by design lecturer Aaron Beehre, have produced Chained (2010), a catalogue publication of richly diverse essays, presented as a readymade in its own right, showcasing the strength of the Design Department.

On the whole I would call it a success, but also an intellectual challenge - which is good. But don’t try to blind me with science (unless it’s actually relevant) when the art should be doing the talking.