Bringing Art and Science Together 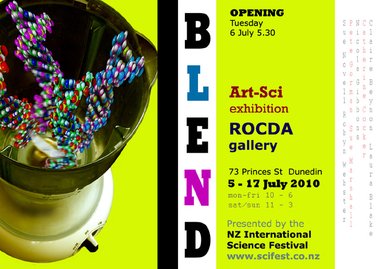 Beynon and Bowser created micro-environments to research the behaviour of a group of ancient uni-cellular aquatic organisms called foraminifera ('forams') based on drawings Beynon had made of the Antarctic landscape, using light and Scanning Electron Microscopy (SEM) to observe and document foram behaviour. As a result, they gained new insights into the way in which these organisms extend their myriad tiny tendril-like pseudopodia into their environment to build intricate and elaborate protective shells and capture food.

Art and science have been part of human culture since at least the time of the Renaissance when they were considered to be both of the mind as well as the senses. But with the Enlightenment they separated when the ‘poetic’ (in its most general sense) became the antithesis of the ‘rational’. That is the background for the ideas presented here.

Catherine Cocker’s sculpture Transition, an ark-like stainless steel armature for an impressive array of glass test tubes, is positioned in the gallery’s window to catch the attention of passersby. In her written statement Cocker explains that shortly after arriving in Tonga her father’s life was saved when he put his faith in medical science and was cured by an experimental tetanus cure. What this story and the work proposes more generally is that science and religion are both a matter of faith and, for many people science has become a new form of religion. Within the realm of faith, science is as alluring and captivating as the work’s glass test tubes that repeatedly capture and reflect the light. More subtly, however, and not without a slightly irreverent sense of humour, Cocker raises the issue of blind faith in genetic reproduction and manipulation (if this is Noah’s ark, the animals might have been little more than DNA in its test tubes). Of particular concern to the artist is the fact that the genome or genetic map of an individual’s DNA becomes the intellectual property of the scientist who discovers it and can then enter a world of genetic ‘improvement’ and trade.

Sue Novell‘s paintings explore systems and sensation. Interestingly, the artist applied ‘image slicing techniques’ to an original digital image to create a series of images she coloured according to their differing levels of grey scale. In so doing, she loosely mimicked the ‘false colour’ process applied to black and white images in many scientific visualisations. These paintings, which I felt would benefit from being slicker, point to the fact that both science and art can involve systems of inquiry that privilege visual sensation.

Nearby, the works of Laura Blake and Claire Beynon were more concerned with the preservation of our natural environment. Blake’s cyanotypes utilise an environmentally-friendly photographic process and in works such as Kitchen Sink depict the fact that just about everything seems to end up in our oceans, one way or another. The handmade photographic emulsion and cyanotype process Blake uses produces a protein that feeds bacteria essential to the wastewater treatment process and a small amount of iron that feeds the phytoplankton of Phytoplankton: Karitane Bar Bubbles. This plays a major role in reducing atmospheric carbon dioxide.

In response to the ecological disaster that has followed the explosion of the Deepwater Horizon oil rig in the Gulf of Mexico, Beynon presents oil and pencil works on paper that excerpt texts such as Margaret Atwood’s poem Elegy for the Giant Tortoises (1968) and W.B. Yeats’ The Second Coming (1919), as well as evolutionary biologist Lynn Margulis’ lyrical book ‘What is Life?’ (2000). By presenting texts so commonly concerned with the fragility and persistence (or not) of ecological systems, Beynon seems to recognise language - with its capacity for creative expression and communication - as the basis of both art and science. Certainly, the realm of figurative language, and metaphor specifically, has in my mind been convincingly established as essential to science by philosopher Zradkov Radman who explains how it is central to the description of scientific concepts and hypotheses in his ‘Metaphors: Figures of the Mind’ (1997). Beynon presents gentle yet poignant works that pose poetry as a form of personal protest in the face of a disaster the size and impact of which is otherwise beyond our grasp.

Beynon is the exhibition’s most seasoned arts-science practitioner and the work she completed in collaboration with polar biologist, Dr. Sam Bowser following two research seasons in Antarctica in 2005 and 2008 is most impressive. The two of them created micro-environments to research the behaviour of a group of ancient uni-cellular aquatic organisms called foraminifera (‘forams’) based on drawings Beynon had made of the Antarctic landscape, using light and Scanning Electron Microscopy (SEM) to observe and document the foram behaviour. As a result, they gained new insights into the way these organisms extend their myriad tiny tendril-like pseudopodia into their environment to build intricate and elaborate protective shells and capture food. In addition, the visually enchanting SEM images became the raw material for a series of art works that recorded the art of scientific investigation.

Artists Nicola Gibbons and Robyn Webster turn the eye and mind towards microscopic life. Gibbons presents five paintings in her Changing Structures series that portray the cells of a body’s unseen microscopic ‘interior scape’ as threatened by the ‘anti-nutrients’ ingested as part of a modern diet. As the artist points out, more than 3,500 man-made chemicals have made their way into our food and are linked to many of today’s diseases. In Kidney Cells blues and browns take on a hint of corrosion, for the painting’s surface is subtly textured to suggest otherwise unseen chemical reactions. Gibbons also juxtaposes her painting, Lysosomes #1, of the lysosome organelle essential to a cell’s disposal of unwanted and destructive matter, with that of a painting of a leukaemia cell that spreads a deadly disease. In so doing, she evokes the body’s ability to heal itself while warning of bodily threats.

Webster’s sculptures combine harakeke fibre and resin in unexpectedly rigid woven structures that seem to form, twist and turn into their own science fiction. Webster draws on research she is doing with the Biopolymer Network via AgResearch in Lincoln, Christchurch, investigating sustainable natural alternatives to fibreglass. She also evokes the fascinating and troubling application of nanotechnology. Her sculptures seem to artistically interpret the kind of molecular self-assembly made possible through tiny nanometers made to control and even generate matter on a molecular scale. (Nanometer size has been described by Jennifer Kahn in National Geographic as comparative to a meter as a marble is comparative to the size of the earth.) Webster’s sculptures, entitled Intervention, Concentration and Occupation, also indicate the unease with which many commentators have greeted nanotechnology which, if unregulated and unchecked, could have serious environmental consequences.

Of most interest to me is Pete Gorman’s audio-visual sculpture Heteroclite which he describes as ‘an auto-poetic self-referencing machine’. In it he pursues the idea of visual sonification first suggested by the poet Rainer Maria von Rilke in Primal Sound (1943). He exhorted artists to seek sound ‘in another field of sense’ and the idea was then made artistically significant by Japanese artist, composer and performer Yasunao Tone, co-founder of Group Ongaku and an original member of Fluxus.

With Molecular Music (1982) Tone linked text, image and sound by projecting Chinese poetry onto a screen to which light sensors were attached. These sensors interpreted the image as a data stream that, in turn, activated sound oscillators to which they were also connected (a certain frequency of signal activated a particular tone). Heteroclite pays homage to Tone’s pioneering work and similarly relies solely on analog technology (Tone’s later work uses digital technology) while taking his idea further to create a continually self-generating performance system.

The sound signals produced by Gorman’s handmade audio oscillator circuits are transformed to a video signal that produces flickering light and shadow patterns on an 80’s vintage TV screen and that, through light sensors, is transformed by the audio oscillators back into sound. Droning and flickering in its own anomalous way, Heteroclite ultimately, idiosyncratically and subversively blends not only art and science but also systems of perception and communication.

Blend:Art-Sci opens an interesting and important dialogue about the natural and necessary relationship between these two areas of human endeavour. If the exhibition continues to be part of the New Zealand International Science Festival, it could be expanded to even more fully materialise an active and compelling art-science practice.