Searching For The Elusive Taniwha 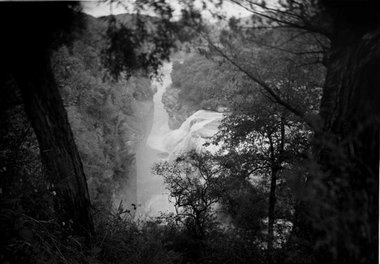 This show makes a lot of sense in terms of Campbell's long standing interest in obsolete methods of making photographic images, ecosystems, different sorts of community (be they biological or human), botany, geology and various fluid-based life forms. However whilst this is a typically visually and conceptually intriguing Campbell exhibition it doesn't achieve the heights of her more innovative 'Marianas' (2002) and 'Bloom' (1999) projects.

This exhibition by Joyce Campbell takes up both floors of Two Rooms’ exhibiting galleries, and though it doesn’t seem that long since her last show, it’s been over two years. That presentation had six small Ambrotypes on glass, and thirty later prints taken off wetplate Ambrotypes. All of plants found around Los Angeles.

Te Taniwha features sixteen images that are gelatin silver prints from conventional negatives, seven gelatin silver prints off Ambrotypes, fourteen daguerrotypes and a ‘sculpture’ with two films projected on to a translucent intersecting screen of four panels. All the images are to do with the running waters of the Ruakituri and Hangaoa Rivers and the mythical and zoological creatures that dwell within them and the Te Reinga Falls; within the Ureweras and the countryside around Wairoa, the town where Campbell had her childhood. The male taniwha Ruamano is linked - in the Ngāi Kōhatu tradition - to the Ruakituri, and the female one, Hinekōrako, to the Hangaroa.

To make the spectacular vistas of connected rocky landforms and more subtle shots of grottos and pools that she has, Campbell has been working closely with the Te Reinga community, particularly the Niania whanau - and historian Richard Niania who provides in a very informative essay the contextual background and narratives linked to the serpentine beasts and depicted landscapes. His contribution is important because his writing describes his family’s fleeting experiences with the ancestral taniwha Hinekōrako, thus showcasing the metaphorical significance of the images. Many of these have ghostly traces and smokey blurs (as in the Ambrotypes), or physically change or disappear as you move around them. His stories match perfectly the visitor’s experience of looking at the evanescent images on the daguerreotypes that are on bluish mirrored surfaces that force you to manoeuvre in order to look at them.

In the Ngāi Kōhatu tradition Hinekōrako is represented by an eel, and the tororauiri or longfin eel is a creature with an important presence in this exhibition. There are five close-up underwater images of one in a tank with plants at one end of the gallery, and nearby in a darkened room, a related film loop with two projectors. Throughout the exhibition there are many images of streams and pools with overhanging ferns and damp grasses, and rocky places where taniwha are believed to have sat or shapes that are dragonlike, or marks which could have been made by claws. The images are about the imagination responding to landscape through myth.

Campbell is also clever in the sweep of her referential layering. The connections to experimental cameramakers like Darren Glass and Stephen Pippen are obvious, but one title overtly refers to Duchamp (ie. given the waterfall), perhaps not surprising as Duchamp’s last work, Etant Donnes is structured like the inside of a camera. What is more interesting is that much of this exhibition’s content links in with the paranormal subject-matter written about by Natasha Conland and explored by artists like Dane Mitchell and Olivia Plender. Though historical with its discussions of myths and narratives, it is more about the intangible in the here and now, about a place being currently lived in and actively experienced - albeit filtered through a community’s perception of the past.

This show makes a lot of sense in terms of Campbell’s long standing interest in obsolete methods of making photographic images, ecosystems, different sorts of community (be they biological or human), botany, geology and various fluid-based life forms. However whilst this is a typically visually and conceptually intriguing Campbell exhibition - she is a great image maker and the social/geographical context is highly informative - it doesn’t achieve the heights of her more innovative Marianas (2002) and Bloom (1999) projects.

I’m keen on those endeavours because in them she was not obsessing over the history of photography in the ultra-intense manner that she is now, the images were less technically claustrophobic, and she was striding out discovering new varieties of image making. There was a freshness that seems to have gone now. Although the antiquated technology that Campbell uses and demonstrates in Te Taniwha is getting a bit repetitive it is curious that it is akin (like a dark chamber) to the sensation of being the artist’s skull looking out, thinking with her exploring eyes about the unseen forces inhabiting the landscape. Despite the community emphasis, it’s an exploration of subjectivity and perhaps not quite so interesting.