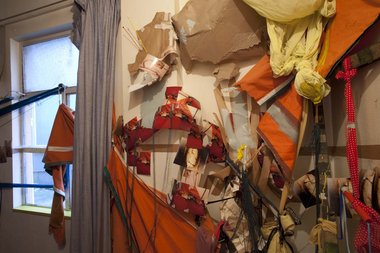 The character played out here is of the homemaker set free from trying to keep house, a celebratory disorder of madness - glitter in the bathroom, wool and tape festooning spaces like party streamers. Wool trails through the space as if it is being used to try and contain walls that threaten to cave in. Knitting needles stud the walls. Tape and a grab bag of sewing fabrics create patterns through the space, like leaking bandages on walls.

Just down the road from Sian Torrington’s Inhabitance at 83 Kent Terrace (property earmarked for Tranzit’s Basin Reserve flyover) is Ouse House, where a strong lively group exhibition once worked superbly with a dilapidated office space back in 2004. An even more relevant project, given its use of materials gathered from the site itself, was Terry Urbahn’s takeover of the Columbia Hotel, Cuba Street as part of the National Gallery’s Art Now in 1991.

Torrington’s Inhabitance is a project of recessionary times, the artist taking a lead amongst Massey graduates in re-entering the Wellington real estate market. What is special about this project is captured in its title. Torrington worked in and with the building in residence for seven weeks before her installation opened, keeping a blog parallel to it (http://allmeaningisthelineyoudraw.wordpress.com/). Opening hours have now finished but the work remains open by appointment (queensian@yahoo.co.uk).

The residence involved drawing materials from the site and neighbouring businesses to play with different responses to every stain, sag, rip and other intrusion of nature’s since its abandonment. Research into the history of the site also informed the work’s creation, though this is not particularly evident in the final work - one potential criticism.

Torrington’s strength is in providing a more abstract, poetic response, creating unstable structure within unstable structure. Her constructions and interventions enter into conversation and tension with the marks of time evident since this small flat was last kept tidy. In a visual dance she has energetically been drawing in three dimensions.

The visual struggle here amplifies the daily domestic process undertaken to keep the changeable environment and materials at bay. In its abstraction the work is as much an expressionistic self-portrait - a lived in and thoroughly worked over psychological space. I was reminded of the expressionistic three dimensional painting of Philippa Blair, Debra Bustin and Barbara Strathdee in the early 1980s. With this too comes the undertone of working with and against the inherited order of the domestic realm, the tight knitting of the home.

The character played out here is of the homemaker set free from trying to keep house, a celebratory disorder of madness - glitter in the bathroom, wool and tape festooning spaces like party streamers. Wool trails through the space as if it is being used to try and contain walls that threaten to cave in. Knitting needles stud the walls. Tape and a grab bag of sewing fabrics create patterns through the space, like leaking bandages on walls. A domestic colour palette, including pinks, blues and lemony yellows, softly bonds the entire work.

At other times it feels like the space is being turned inside out, its moist jungle innards and back-stitching revealed. Overlapping pieces of wallpaper are taped to the wall, their backs facing out and covered with a mingling of mould and Torrington’s own marks. Cables and wool snake through the space. One corner in the corridor, where the flow of energy stops, shows Torrington’s visual strength. Like strong painting, the assemblage has strong lines coming out of a riotous chaos, the construction gleefully but barely holding itself together.

Playing off domestic pattern, taped collages act as pools of memory. They document experiments in the space during the residency, drawing our eye to details both inside and outside the building.

There’s exuberant joy in Torrington’s play with functional spaces. The toilet is still working but while you do your business you’ll find a collage of naked lightbulbs looking down on you like supervising eyeballs. Pink glitter is sprinkled on the skirting like a crumbled toilet lozenge, and smeared up the wall like pretty pink faeces. In the bathroom blue glitter in a water-filled bath matches the dripping tap.

The living and dining rooms are more problematic and less coherent. Torrington extends the ivy reaching through the lounge window into a circuit of brambly branches, some painted, others sutured to electrical wiring. These wrap around a painter’s easel on which is propped an old plank, whilst behind the door two big branches are wrapped in plain unpatterned material, reminiscent of Joseph Beuys in their ghostly bonding of natural and human elements.

The house is a big space Torrington doesn’t shy from filling in her own unruly fashion. A more refined minimal approach to the found richness might have been more visually satisfying, yet - as is clearly obvious - it wouldn’t reflect the opportunity for experimentation.