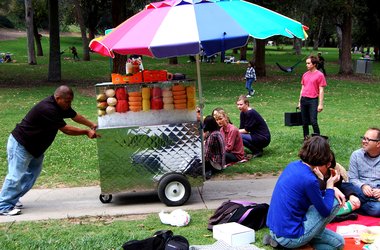 While you watch park-goers picnic and tree climb in the Howden-Chapman's film, you can also out of the corner of your eye, observe Wellingtonians out in the sunlight eating their sandwiches. As the gorgeously laconic lake-like Californian voice tells us “I wish birds would land on my voice like they land on a lake.” I actually see a sparrow try to take a sandwich out of a man's hand as he takes it to his mouth.

The video vitrines in the grand portico entrance to City Gallery are among the most interesting and awkward, accessible and compromised gallery spaces in Wellington. Here contemporary art crowds under the eaves for shelter, whilst not actually entering the building. But as the two most recent presentations show, sometimes the artists work smartly to resonate in the site.

The curated program here entitled Square2 is well presented and strong. The focus tends to be on new artists on the block, so for many it’s the first place you’re likely to get on at CGW. My impression is that the program has really developed in recent years, the curators and artists’ thinking analytically about the portico’s difficulties and opportunities. Given it runs 24/7 the program deserves to be promoted as one of the city’s best kept night-time cultural destinations. Bring vino and a blanket and make yourself comfortable.

The nature of a thoroughfare is to glance left and right as you look ahead - in this case intent on overcoming any front-of-house barriers to reaching the art. Sadly then I rarely see people giving decent time to the work in the vitrines. I often feel like a loiterer when I stay there for more than a few minutes - it’s part of the dynamics of the space. Yet there is something appealing about the way this presentation space is embedded in the gallery’s architecture as part of the portico’s function. A second-glance kind of place as you leave or shelter from a storm.

Unfortunately artists tend usually have the same work on both left and right screens, the monitors working off one DVD player. Only rarely are two players freed up. This is not a good look. When artists and curators work to this specific brief however it can be very effective, as in the mirroring of the Mangano Twins .

The most recent work, ‘Untitled (a conversation with the body)‘ by Tiffany Rewa Newrick, was particularly compelling in the way it resonated within this physical cavity. With its mirrored image of a corridor either side of me I found myself bestilled at a crossroads, taking a moment to breathe.

The corridor in Rewa Newrick’s work appears to be just part of one line of a matrix maze of storage compartments. This complements the architecture of the portico and alludes to the storage function of a library (as it once was) and museum. Within this hallway, like a ghost in the machine, a bubble of air in plastic floats, like a trapped physical abstraction of movement. It then advances seemingly unaided up the passageway before returning and then wafting out of sight for what seems like forever. It eventually returns from another unseen direction to completely cover the lens, only leaving a faint image of the physical space behind it. Reminiscent of camera obscura, this is in itself a rather effective exploration of the space contained within a movie camera’s field of vision - a corridor replacing the still camera’s chamber.

With such a austere touch and at 24 minutes this tests the patience (the work could arguably be shorter), yet I found myself pulled back several times to try and discern what was changing in the shimmering details of the still passageway, as if the screens were subtly magnetic. In the process of solving a spectral mystery, my body was starting to synchronise in breath and pulse with the plastic bag. With her minimalist props Rewa Newrick has created a dance of containment and release, an experience mildly synaesthetic in effect.

Up until today, when the next set of shows inside open, there has been the chance over the past week to experience the portico as destination rather than thoroughfare. Amy Howden-Chapman’s Drain Lake Project replaced Rewa Newrick’s Untitled… and made me think how fitting it would be for video to be presented in a series of small shady pavilions in public spaces, sheltered from the real world but with the surrounding hubbub in close proximity.

Howden-Chapman‘s film and audio work is set in an LA park, and the portico becomes a restful pool in the midst of the stream of the thoroughfare. While you watch park-goers picnic and tree climb in the film, you can also out of the corner of your eye, observe Wellingtonians out in the sunlight eating their sandwiches. As the gorgeously laconic lake-like Californian voice in Howden-Chapman’s work tells us “I wish birds would land on my voice like they land on a lake.” I actually see a sparrow try to take a sandwich out of a man’s hand as he takes it to his mouth.

Howden-Chapman is studying at CalArts and this film shows her contribution to The Elysian Park Museum of Art, a project where a group of artists have been using this local park as a starting point for making work.

I expected to be underwhelmed by this performance-and-sound project experienced second hand in New Zealand through video, but the artist has worked carefully with the context and media. Filmed in 16mm to evoke the unsteady nostalgic lurch of the family cinecamera on weekend duty, the camera takes us down a path that might also be a drain, to a ghettoblaster blocking it. The screen then rather neatly, fades to black for several minutes during the performance of the vocal text, presumably being broadcast by the machine in the film. The effect is so striking I feel like I’m hearing audio in this portico for the first time. Perhaps I saw it as a disruption to the main gallery activities at other times?

In a beautifully paced poem the voice meditates on how it was chosen because it is like a lake - not anything else, such as other things that might also be seen in the park: “My voice was chosen because it sounds the most like a lake. Not a river, a lake. Not at all like a piñata, like a lake”. There is a connection with the experimental American language poetry tradition in the play with the first person performance voice of the text.

While the man in this work sounds like a lake (which he truly, deliciously does - it’s a voice you almost want to drink), the reverse occurs in the film. It’s as if the camera as object has of itself become animate and is scanning the ground like a thirsty water diviner from the past, following a drain to where a lake once might have been. Close to this spot in Wellington, in her One Day Sculpture project, Howden-Chapman made us aware of the old unreclaimed waterline below our feet through the music of ships bells. In Los Angeles water supply is a huge issue, and with a light touch this work speaks of water care as well as care over language.

Howden-Chapman’s strengths as an artist and writer make a strong combination in this work, helped by her experience as a performer, shining through in the work’s direction. In both the City Gallery portico, and I’d imagine in situ in Elysian Park, her Drain Lake Project provides a rather beautiful pool to paddle in.

Nice writing for the voice-over, Mark. Those are terrific examples you give. I'm impressed by her language skills. It will ...

Nice writing for the voice-over, Mark. Those are terrific examples you give. I'm impressed by her language skills. It will be exciting to see where she takes that ability.