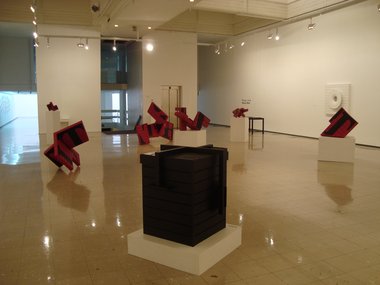 These two shows signal that CoCA has entirely shaken off any residual clichéd stereotypes of it being dowdy, twee, and a sanctuary for Sunday watercolourists. Now it is giving Christchurch Art Gallery a run for its money with some truly significant shows, which is what we wanted all along.

One can indeed venture to guess that it was Mondrian who identified purity for us in modern painting and, further, that he alone was able to carry its method of execution so far beyond itself that the method became a purification rite … The answer for him lay at the ‘heart of the matter’, in the continuous and polarized forces of the universe, not in the seeable world. But the seeable painting was to reveal it, however momentarily, for nothing else would. So he set himself the task of creating a visible vocabulary for what until then had been invisible.
- Allan Kaprow, ‘Impurity’ in Jeff Kelley (ed) Essays on the Blurring of Art and Life, (Berkeley, 1993) pp 29-31.

In the 1950s and 60s, New Zealand artists and architects went to England, returning with the seeds of Constructivism. Architects Peter Bevan and Miles Warren brought back brutalism. Don Peebles met British artist Victor Pasmore and heard Vladimir Tatlin’s call to “truth to materials” first uttered in 1915. Perhaps the movement appealed to New Zealander’s pragmatic no-nonsense sensibilities, because it had a lasting impact on New Zealand art. The Centre of Contemporary Art (CoCA) has, of late, offered quaking Christchurch two excellent exhibitions by modernist Grand Old Men illustrating this.

From 7th December 2010 to 15th January 2011, CoCA’s Mair gallery hosted Morgan Jones - Recent Work, a selection of new work by Morgan Jones. Born in Surrey, England, in 1934, Jones did not arrive in New Zealand until 1955, settling in Christchurch, attending Christchurch Teachers’ Training College 1958-59. An eccentric, witty, Englishness persists in his sculptures. Jones is a renaissance man, a self-taught artist and author of detective fiction. He has been making sculpture since the mid 1960s. National recognition came in 1975 when the artist received the Hansell’s Sculpture Award, and in 1985 he was profiled in Art New Zealand. Currently, Jones is represented in many public collections. In 2004, Christchurch Art Gallery hosted a major retrospective: Journeys and Decisions.

Jones’ architectural structures are emphatic objects - abstract, minimal, self-contained and directly experienced. His minimalism is a mischievous one that along with Anthony Caro, Anne Trutt, Richard Artschwager, Robert Smithson, and Tony Smith, never rejects content or anthropomorphosis entirely. References to the human world and the New Zealand landscape are always present, whether that be geographical, geological, or the vernacular architecture of fruit sheds or bee boxes.

Jones’ sculptures are less compositions than elegant, monumental exercises in the concrete unity of colour, texture, form and material. The works in Recent Work, while very much continuous with his oeuvre, seems to be moving at a tangent, picking up the fine, playful thread of playful Pop Art that always ran through them and expands it to talk about life, his life. The alphabetical reliefs and monochrome surfaces suggest Jasper Johns rather that the minimalism of the 1960s and ‘70s. The more obvious shapes rendered homogenous with a layer of paint remind me of tidied-up Robert Rauschenberg, early Claes Oldenburg and even a vaguely Stanley Kubrick aesthetic suggestive of certain design elements in Clockwork Orange and 2001.

This is art which knows what it’s about and is comfortable with its place in the scheme of things. After the 19th of January, it was replaced with Roy Good: Triangles, Octagons and Lintels, Shaped paintings from the 1970s to 2010, which I assume to have been excised from Ed Hanfling’s brilliantly curated In Good Form: The Abstract Art of Roy Good, that showed at Lopdell House in Titirangi in 2007, with new bits added.

Good was born in Timaru in 1945, graduating from the University of Canterbury’s School of Fine Arts 1965-1965, moving to Auckland to work as a designer for what was then the NZBC, later TVNZ, where he was head of design from 1983-1989. During that time his stylishly mod sets and graphics definitely impressed themselves on the developing psyche of this writer as a child, as did his Gordon Walters influenced logos for the quickly forgotten national sesquicentennial (though the spiralling white kotuku on red lives forever), South Pacific Television (spiralling pitau/koru shapes forming an eye), and New Zealand’s pavilion at Expo 92 (yet another double spiral).

In 1972 Good began the first of the remarkable shaped paintings that concern us here, the Triangle Suite and the Octagons. The resulting dynamic formalism is utterly engaging, as if announcing the utopian optimism and excess of the 1970s (rainbows, smiley faces, stripes, glitter, glam, psychedelia tamed for gifted children). It channelled De Stijl, Malevich, Frank Stella, Max Bill, Barnett Newman, and Kenneth Noland for a New Zealand audience no doubt still startled by the lack of any recognisable figuration despite a couple of decades to get used to that sort of thing.

There is a raucously up-beat Op Art quality to these paintings, each a subtle meditation on the possibilities of geometry. The palette, however, is relatively subdued, the brushwork of the colour fields subtle and flickering - something only made clear in the flesh. The overwhelmingly hard-edged graphic quality is pure design and brings home that Good the Designer is always hovering at the shoulder of Good the Artist, explaining the absolute clarity and logic of composition in these works. It is easy to see what attracted the attention of Petar Vuletic in the 1970s, an Auckland gallerist well known for promoting the cause of internationalist non-objective formal abstraction. Good joined the Vuletic stable which also included Milan Mrkusich, Phillip O’Sullivan, Ian Scott, Geoff Thornley and Gordon Walters - a natural home.

With Good, in the words of Frank Stella, “What you see is what you see” - pure retinal pleasure. Form and colour are absolutely specific, integral and determined by the mechanism of the painting. What is remarkable is that despite certain obvious atavisms of the 1970s and early 80s - the test pattern/house paint aesthetic, the lattices, the newest work remains every bit as vital, pleasing, immediate and relevant. Despite the aspirations of abstraction as a pure international language, a certain New Zealand-ness makes itself known through the idiosyncratic and sometimes quirky directions taken in colour and form that distinguishes these marvellous works from the strict commandments Greenberg brought down from the mountain to something a bit more No.8 wire (the 1980s was the decade of the kiwiana revival after all).

These two shows signal that CoCA has entirely shaken off any residual clichéd stereotypes of it being dowdy, twee, and a sanctuary for Sunday watercolourists. Now it is giving Christchurch Art Gallery a run for its money with some truly significant shows, which is what we wanted all along. No disrespect intended to Justin and his colleagues, but it is refreshing to open up the curatorial discourse in Christchurch with large survey shows other than the Gospel According to Paton et al.