Thinking about the films of Peter Watkins 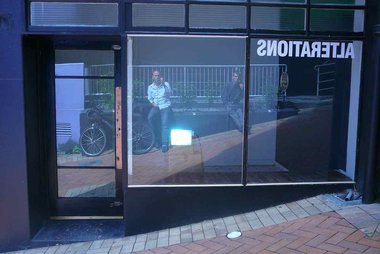 In Narkevičius's film Watkins talks of his astonishment at how, given its power over us, we rarely question the way moving image is constructed.

The Role of a Lifetime

Alterations is an art project space at the top of Plimmer Steps, established in a empty shop space in late 2010 by Laura Preston (curator at Adam Art Gallery), Joel Cocks (designer) and Amit Charan (artist and former trustee at Enjoy). It’s described on their website as “a year long series which tests out interventions and proposals for new exhibition formats.”

After an “inaugural gesture” by Ben Curnow, the second project (in December) by Richard Frater saw the removal of the windows of the shop by the artist for the entirety of the exhibition, with the door kept closed. Like some Gaelic Samhain ritual exorcising former private retail demons, and with distinct echoes of several Billy Apple projects, the space was opened out to the world of the city outside its door.

That Alterations uses a quiet but very public pedestrian space to experiment with modes of communication has felt evident from the project invitations. The second invite (after a handwritten letter) was by way of phone voicemail embedded as digital file in an email. For the latest two projects the mailing list got a rather nifty fold out pamphlet made in translucent plastic that folds together in different text combinations. The form and material here seem very apt to the work.

Crisscrossing the boundary between private and public communication in a number of ways, Deimantas Narkevičius‘s 2003 film The Role of a Lifetime is currently screening 9am to 7pm daily in the Alterations window. In terms of attention to viewing context (touched on in my recent piece on the City Gallery vitrines, this is a beautifully and thoughtfully presented temporary public artwork - an inspiration in terms of how moving image and audio can be done in such a setting.

Back projected onto a small A5 envelope shaped screen applied to the window glass, the projector sits on cardboard boxes. Apart from the word Alterations in reverse on the window this forms the entire installation.

In its strong position and in its minimal, makeshift but elegantly calibrated presentation Narkevičius’s is a difficult work to miss on first glance stomping down the hill, requesting regular pedestrians to stop on a few more occasions for a better look with its engaging crossing of media and perspectives (Plimmer Steps is a much loved and steep office workers thoroughfare). Alterations is also located next to a boutique espresso joint, ensuring a regular loitering clientele.

The intimate, but passing relationship to the public in this alley, given the immediate intimacy of the audio broadcast out onto the street, help make the film a strong selection. The Role of a Lifetime is all about the subjectivity (and empowerment) of both the viewer and artist’s perspectives, and how there is never one fixed viewpoint. There’s also never one fixed viewpoint for the passerby with this work.

Narkevičius’s film is an experimental documentary about the legendary experimental documentary maker, Peter Watkins. Broadcasting an interview with him that presents an honest and passionate, personal and political monologue that cuts right through the camouflage of generic marketing language we’re usually subjected to in the street, it sends out messages of empowerment to the passerby to be a cultural active agent.

A pioneer of a docudrama and a play with form becoming increasingly popular in the visual arts, Watkins is always political, creating slippage between reconstruction and documentary to undermine any singular authority. I was blown away by the parts I saw of Watkins’ 5 hours and 45 minute long film of the Paris Commune using nonactors at the Sydney Biennale in 2008, and the interview with him that accompanied it. Staged in a warehouse and filmed over a few days, Watkins saw the Paris Commune as a piece of history for our times, providing illustration that people, and his actors, could question hierarchy and collectively have a vision for the future in a time of greed and moral bankruptcy.

In Narkevičius’s film Watkins talks of his astonishment at how, given its power over us, we rarely question the way moving image is constructed. Narkevičius’s film pays homage to this. Just as Watkins’ work gives us realism overtly staged, playing across media (his first work, he relates here about the Hungarian uprising was filmed in England based on still photographs of the uprising rather than film), Narkevičius’s begins with a 360 degree camera movement around a beautifully drawn landscape, so close in its realism to a filmed actual landscape in a situation of winter white out you question whether its real or drawn. This fades in to black and white collected cine footage set in Brighton of young boys, whose playing evokes both Watkins’ youth and his interest in conflict. The drawing returns but this time for a moment we actually see the pencil, and then it starts to become three-dimensional.

The reality of what we see is being interrogated, and we are constantly implicated and involved. Just as Watkins regrets that people don’t reflect more on their history (the drawing features Grutas Park in Lithuania, Soviet and socialist era statues rising in and out of the blank page), the work also feels concerned with time, making us aware of how it is constantly slipping into make believe and role play. How the past is captured in quickly drawn fictions.

In its presentation at Alterations the work achieves what Watkins demands of art: ‘to create an environment where people feel involved.”

I think Peter Watkins once came through NZ on a lecture tour in the early 80s. Readers might be interested ...

I think Peter Watkins once came through NZ on a lecture tour in the early 80s. Readers might be interested in his discussion of La Commune here http://pwatkins.mnsi.net/commune.htm and the difficulties he had with various editors and TV companies. It's a long but good read.