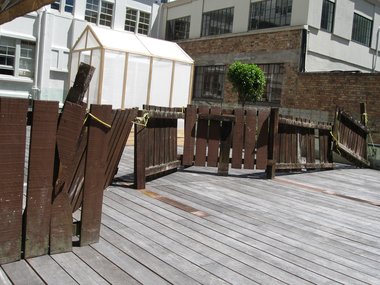 It is a potentially tricky scenario - the use of these premises, and the relationship between CNZ and artists, in terms of freedom of ideas. There will practical and ideological problems, such as meetings going on with confidential information being bandied around. Access to these artworks will be occasionally restricted.

In this new series of exhibitions, Jude Chambers, Senior Programme Advisor of Creative New Zealand, has invited a number of young curators to pick artists to work within CNZ’s Auckland office area (on the third floor of the Southern Cross building) and on the adjacent roof terrace nearby that overlooks Lorne Street. The hope is that some sort of dialogue results, creating a more interesting environs for the CNZ admin personnel to work in, a more inviting, less bureaucratic profile for this vitally important government arts funding organisation, and some good exposure for some not particularly well known artists.

The outcome is that artists and art lovers in general can call in to investigate the activities, visit the location and see/or meet the staff. As you can imagine, it is a potentially tricky scenario with the use of these premises, and the relationship between CNZ and artists, in terms of freedom of ideas - it being a space for liaising with many communities. Inevitably there will be practical and ideological problems, situations such as meetings going on with confidential information being bandied around. Occasionally access to these artworks will be restricted.

This first show is organised by Kate Muggeridge, an artist/curator who shortly in February will present Lost Play Grounds, a visual arts festival based at Britomart in downtown Auckland. She was picked by Chambers to get the ball rolling for the CNZ exhibition and so has brought in three BVA /MVA graduates from AUT: Anthony Cribb and Amber Pearson who have separate projects as well as collaborate, and Ross Forbes who presents a site specific installation on the terrace.

Anthony Cribb has a small greenhouse on the terrace built out of wood and (not glass but) plastic scrim, there for CNZ staff to grow veges and flowers - if so inclined. It is a nice looking, rudimentary, peaked roof ‘building’, stocked with watering cans and boxes of staked tomatoes, peppers and beans, along with cress, spinach, carrots, marrows, pansies and chrysanthemums. Of course the odd splash of water or bit of pruning is hardly high maintenance and somebody is bound to be interested, seeing the artist basically has done all the work. Perhaps dealing with voracious insects in an ecologically sound manner might be a problem, especially as the number of edible items is so small. In such a case, is the labour worth it gastronomically for CNZ employees, or is it done only to humour the artist?

Ross Forbes’s installation is a rickety wooden fence that zigzags across the terrace bisecting it. It was borrowed from a Mr and Mrs. Havili of Avondale, where it usually demarcates the land around their state house. Forbes through CNZ, also got permission from Bob Jones the owner of the terrace and the building supporting it, to remove some of the floor planks and install the fence firmly. As a replacement he also built a new temporary fence in Avondale for the Havili family.

It is a shame Forbes did not document Jones’ permission and frame it, along with a photograph of the replacement fence, and put them on display, as they seem conceptually embedded into the work on the terrace. These procedural activities were essential for it to happen and pack the resited ‘readymade’ artefact with meaning.

With Amber Pearson we have three works. One, draped over some bookcases in Jude Chambers’ office, consists of two thin coloured mattresses. This collaboration with Anthony Cribb means any exhausted CNZ staff person can have a catnap if they urgently desire to do so, though it is hard to imagine such a person relaxing sufficiently in such a busy environment. Perhaps it is possible. In Mediterranean countries during midday siestas employees often sleep in their offices. And Winston Churchill and J. F. Kennedy were famous for these ‘recharging’ activities.

Pearson’s other contributions are not quite so practical. One is a large suspended ‘pod’ form suspended from the ceiling in the workspace, made of soft, cuddly, under blankets. The large hanging structure, with a ventilating grille of perforated fabric, has a zippered entrance and a hole in the base through which you can stand or (if seated) dangle your feet.

It is hard to imagine anybody getting inside this pear-shaped envelope as a strategy for retreating from workaday tensions and intending to rest. Only suitably infantile exhibitionists with a propensity for clowning, who know they are being watched, would enter this ‘womb’. However as a soft sculpture it is nice to look at and touch. It is beautifully made and beguilingly tactile - just not suitable if you seriously want to withdraw and hide. You’d be better off finding a quiet café nearby to lurk in.

The other work is a pair of devices designed to open and close a set of double doors to a board room. On one side of the passageway is a long, vertical standing, fabric reel used to wind on a rope that - via a pulley system - opens the doors. The other device is a rudimentary foot pump used for inflating a large balloon that shuts them.

Pearson’s logic seems to be that CNZ are used to functioning as the nation’s ‘gate keepers’ for artist careers, selecting for residencies, grants etc. and this work is an amusing form of ‘artist revenge’ where CNZ staff have to laboriously physically and slowly operate these doors as participants in an artwork.

Its wit of course depends on the graciousness of CNZ, their willingness to cooperate: for if as in most corporate offices they happen to be flat out with deadlines and schedules, and are rushing about, they are liable to disconnect devices that slow procedures down. If on the other hand Pearson and Muggeridge (and CNZ) were to be serious about such a project and genuinely believe in the merits of slowing down, not only as a witty rejoinder to a joke but also as a genuine aid to good health, the doors would be permanently attached to the ‘retarding’ devices and their mechanisms would be unobtrusive, built as wall fittings and not as cuddly ‘art’. They would be a genuine means of getting good exercise forced upon the ‘luckless’ office workers and visitors.

While I don’t think some of the art here succeeds this is obviously an intriguing show to think about politically. It’s brave of CNZ to incorporate such endeavours in their workspace and good to have artists and curators attempting to push the boundaries. The scheme is excitingly rich in its potential for generating innovative exhibitions in the future.

Ideally Ross, there is no uniform politic dominating the artworld and differences of opinion are healthy. But in reality, perhaps ...

Appreciate your comments on my art..."political" art can be so toothless at times in the contemporary art world. Usually it ...

Appreciate your comments on my art..."political" art can be so toothless at times in the contemporary art world. Usually it amounts to no more than curatorial box ticking and yawns all round as the usual suspects are wheeled out and commented on in he usual fashion. No power structures are ever really threatened or revealed for what they are.
I have a proposal.
What if, on behalf of the State of NZ I were to offer the State of Israel the State fence presently gracing the CNZ offices. After all....Egypt is a big country to their south and to fence it all and prevent the outbreak of any democratic tendencies might require an international effort.
I, on behalf of all NZ concerned citizens, would gladly give a State Fence from Avondale,[not Avonhead!], New Zealand to the State of Israel so that the world remains free of terrorism and the prospect of Arab democracy.
Or is expressing such a view a deathnell to any chances I might have of a "career" in contemporary art...neutered as it is politically... particularily when it comes to anything that smacks of criticism of Israel-the Final Taboo.

Ideally Ross, there is no uniform politic dominating the artworld and differences of opinion are healthy. But in reality, perhaps artists and curators are like sheep, or as Robert Hughes once put it, schools of fish that follow the leader. Each one of us of course will claim we make up our own minds on each issue independentally. 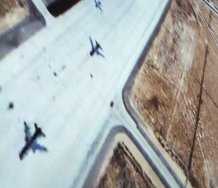