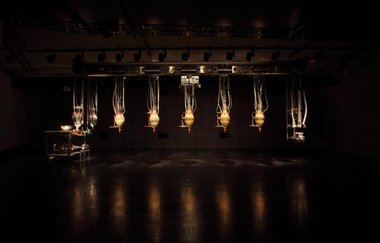 The effect is like entering an Egyptian tomb, which is a conscious play on the sarcophagi and assorted objects of colonial plunder that form a key plank of the collection. While the so-called ‘old art' is kind of compelling in its own right, it is really brought to life by the decision to juxtapose it in and around contemporary works.

Art reviews are always provisional but what follows should be treated with particular caution. I was at the opening of Australian art collector and gonzo culture enthusiast David Walsh’s phenomenal new museum MONA (Museum of Old and New Art) in Hobart last week and some things (artwork, architectural features, opening night performances) have been etched permanently in my mind. But the Bacchanalian excess of aristocratic food, live performance overload and to be frank, the most stunning array of alcohol ever assembled at an art museum (Venice included) has blunted the acuity of this critic’s pencil. My last recollection was stumbling through a vineyard towards dawn with the Austrian art collective Gelitin and finding a pavilion of Anselm Kiefer’s work in the middle of the grapes for the 2011 vintage.

What struck me as I looked down through the skylights on the work of this heavyweight of German neo-expressionism was how hilariously whimsical the work looked. The big picture grandiosity of his lead installation was certainly radiating from its subterranean cellar, but the context of a pavilion popping up in the middle of a muddy vineyard in the industrial suburbs of North Hobart, blunted, to say the least, the earnestness to the point of markedly messing with its dour meaning.

No doubt Walsh would find this amusing that he has given Kiefer and many of the artists in his collection an entirely new spin. A sort of libertine internet millionaire who happens to like visceral art of all eras, Walsh has spent the past six years planning and then building a suitable venue to host his collection. When you have forked out around $170 million dollars on an eclectic assortment of antiquities and contemporary artwork focused on sex and death, the lounge room is clearly not going to cut it as an exhibition space. What we have instead is MONA, an enormous private museum designed by Melbourne architect Nonda Katsalidis, cut into the cliff face of a peninsula in Berriedale. It looks more James Bond than Guggenheim and this impression of a cashed-up villains bunker was only exacerbated by the mode of entry for the guests at the opening. We had to arrive via catamaran and were plied for the journey from Hobart with expensive champagne. On arrival at the museums private wharf a swag of waiters greeted us, keen to top up our glasses for the short stroll up the gallery entrance.

So far it sounds like a by-the-book exercise in art grandiosity from someone taking their unfeasibly large bank balance for a very public and vainglorious drive. And no doubt this is in part accurate but, like a generation X Willy Wonka, Walsh has a decidedly perverse streak and for those of us entering his art factory there are surprises at every turn. For one, the door to the museum is little more than that, a door, which leads to a very modest entrance way containing a large table. On top of the table are hundreds of i-pod touch-like MP3 players that are handed to each audience member as navigational guides. These devices contain all the information about the art work in the museum and are broken into three sections of information: gonzo, ideas, and thirdly a classic Walsh touch, artwank. We then in a highly theatrical flourish descend a spiral staircase to reach the galleries below ground.

The effect is like entering an Egyptian tomb, which is a conscious play on the sarcophagi and assorted objects of colonial plunder that form a key plank of the collection. While the so-called ‘old art’ is kind of compelling in its own right, it is really brought to life by the decision to juxtapose it in and around contemporary works. Thus the opulent aesthetics of Egyptian death take on a new currency when located next to Mat Collishaw’s treatise on death, Bullet Hole first shown in the Sensation show at the Royal Academy in 1997.

It’s not that everything is rendered equivalent, but there is a definite attempt at play to shake up our expectations and to recalibrate existing art hierarchies. Subtlety and sensitivity are not words that spring to mind in the museum’s hang as Walsh instead gives the finger to sober and intellectually inflected curatorial prerogatives. His criteria are more based on abrasion, questionable taste, and wallowing in the ability to make his own piss elegant art history.

One senses that he is having a very good time in his large rumpus room and this feeling really carries the whole enterprise. There is a definite boys’ own sensibility from the scatological science lab of Wim Delvoye’s Cloaca Professional, a machine that follows the stages of human digestion to ultimately produce compellingly lifelike shit, to Greg Taylor’s naughty Cunts and Other Conversations, a series of 140 casts of female genitalia. There is even the fancy red convertible - even if Erwin Wurm’s large-scale sculptural version is more obese couch potato in shape than streamlined boy racer dream.

And of course there is a lot of spectacle. Whether it be Sidney Nolan’s 1620 panelled behemoth Snake which has been in storage for nearly all of its forty years, or Julius Popp’s sublimely beautiful bitt.fall which is a waterfall that perfectly forms the most popular words searched for each day on Google, there is a high wonderment factor at play.

Walsh has described the experience as a subversive adult Disneyland, which while having a modicum of truth to it also feels a bit too pat and contrived. The work is less subversive than naughty, less Disney than burlesque on acid, with a decent whiff of what I would call punter-accessible de Sadean perversity thrown in for good measure. It wants to shock establishment Hobart’s sensibilities and probably to some extent does - though the four gushing pages of uncritical celebration in the contemporary art hating Murdoch rag after the opening suggests that shock of the moral variety can now be easily absorbed into a positive attribute. If it helps put Tasmanian culture centre stage in the international media’s news cycle and brings in the tourist dollar, then bring on the debauchery!

MONA is clearly one man’s folly but a strangely benevolent and compelling one. Entrance is free and its generous opening hours suggests Walsh wants the local audience as well as visitors to really connect with his remarkable collection of objects. It marks out what can happen when an idiosyncratic predilection for strange and edgy artefacts both old and new is matched by extremely deep pockets.

The latest conceit is buying the rights to filming and subsequently broadcasting - via live feed - French artist Christian Boltanski 24/7 until he dies. There is a wager at the centre of this work so that Walsh will make money if Boltanski ‘checks out’ within the next four years, but Boltanski will ‘clean up’ if he lives for another ten. My money is on Walsh. After all the entire MONA empire is built on gambling money and Walsh has proven he knows how to carefully calculate the value of risk.