Lundberg is clearly interrogating a focused dialogue between the micro and macro and this shifting of registers between installation and the discrete object is highly nuanced. At a distance the works read as one installation and activate a conceptual programme suggestive of the frugal material investigations of Martin Creed. Yet this schema, which feels both familiar and conventional in recent practice, is recast by the artist's take on modularity.

Peering into Robert Heald’s glass fronted gallery late at night I initially thought he was in changeover mode. The darkened space looked empty and it was only the ambient light emanating from other Left Bank businesses that provided a clue to the contrary. A thin red strip could just be made out on the nearest wall. No more than three centimeters wide and perhaps just under a metre in length, this zip of colour seemed to be the only thing occupying the entire gallery space. What was especially interesting in the semi-darkness was the line was not quite straight, evoking a curious distended or crumpled sense to what at first glance appeared to be hardedge abstraction.

Such a partial encounter with Patrick Lundberg’s work seemed especially prescient when the full spectrum of the show was revealed in daylight. The gallery, it turned out, contained a number of different ‘strips’ together with a series of large wall works consisting of a range of small marble-like pins attached to the wall in assorted configurations. Common to all of the components was a chameleon-like quality whereby each piece only just managed to emanate a sense of contrast from its surroundings. From a distance the effect is especially sparse with only tiny filaments of colour shape and line breaking the seamless whiteness of the walls. Yet on closer inspection each work is markedly recast by the surprising complexity of each component.

The strips of colour are actually painted shoe laces simply pinned to the wall. Where at a distance each one appears to be monochromatic they are in fact hand painted with painstaking and elegant cross-hatching suggestive of a complexity usually associated with textile design and production.

Likewise the pin works defer a heightened sense of contrast from a distance, reveal a complex assortment of patterns, colours and surfaces closeup. As with the shoelace pieces, the spherical pins overwrite a very different object underneath the painted surface. Lundberg has carefully embellished and disguised what originally were novelty pool ball pins in assorted colours and numbers. This act of detournement demonstrates a bespoke and finely honed combination of incredibly fine brush work and surface treatment that melts into a unified whole as you take a step back to view the work in its entirety.

Lundberg is clearly interrogating a focused dialogue between the micro and macro and this shifting of registers between installation and the discrete object is highly nuanced. At a distance the works read as one installation and activate a conceptual programme suggestive of the frugal material investigations of Martin Creed. Yet this schema, which feels both familiar and conventional in recent practice, is recast by the artists take on modularity.

While on the one hand he only employs two types of shop purchased object (shoe laces and the pins) and repeats them in different formations, Lundberg ruptures our capacity to see them as simply one thing after another. By imbuing each component with a uniquely crafted form, the artist hinders our capacity to form a classic minimalist-style gestalt that draws together a unifying coherence. The audience thus has to work between the general and the particular, the whole and the part, in such a way that the distinction between installation and artifact is muddied.

A similar confusion operates in the space between the rudimentary source materials and their customisation. The artist by choosing to work with ordinary shop purchased materials prefaces a compelling instability between the mass produced industrial object and handcrafted fabrication. His amalgams are certainly assisted readymades but with a distinctly aesthetic focus. Instead of placing tacks on an iron or adding a signature scrawl to a urinal, Lundberg opts for a more formal approach of building layers of colour and line where you would least expect to see them. These additions are whimsical but not light and speak of an understanding of how complexity can be heightened through surprise and careful juxtaposition and placement.

It is never easy to work across such a strata of visual languages from painting, sculpture and installation especially when there is a broad range of spatial and material issues in train. There are millions of ways to make such alignments clumsy, overwrought and leaden. Lundberg on the evidence of this show has begun to find his own distinctive way of navigating these waters employing a combination of care and audacity to think through the often difficult relationships between installation and the discrete object. 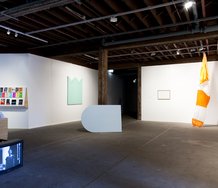