The Construction of the Subject 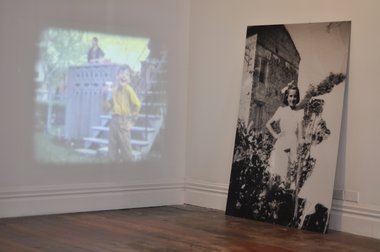 'The Return' is drawn from a selection of ongoing works. Yet rather successfully it hangs together as one journey for the visitor as installation. The gaze or movement of each work moves you physically to the next as if we, like Di Stefano, are on the move.

We still carry our personal histories in photo albums and on film and tape, held on mantelpieces and shelves. Memories are embedded in some images - half-remembered, hazy and incomplete. Time is trapped in others as icons - ancestors we barely knew, or not at all.

In The Return John Di Stefano plays with the movement in space between himself and such personal mementoes. For many of us our photo albums are full of holiday and birthday snaps - our family groupings all together, isolated from daily routine. As the son of Italian immigrants, raised in Quebec and now living as permanent immigrant in a state of elsewhere (until recently Wellington, now Sydney) Di Stefano’s archive is full of separation rather than togetherness. Goodbyes and hellos - the action of the wave of the hand and look to camera (friendly yet guarded, and loaded) - in audio and imagery evokes the charged space in between.

There’s emotional severance hanging on the end of a 747 wing tip. The images Di Stefano selects from the family archive look outward. On the one hand they are about stepping out of the family shadow to determine individual identity, and on the other looking back to the parental emotional forces that have helped shape you (I’m reminded of the Maori concept of the past being in front of you, the future coming up from behind). The work ends up sitting strongly physically in the space between the artefacts in the gallery.

The Return is drawn from a selection of ongoing works. Yet rather successfully it hangs together as one journey for the visitor as installation. The gaze or movement of each work moves you physically to the next as if we, like Di Stefano, are on the move. It’s a relief in this respect from the fragmented less-considered arrangements I normally have to make my way through with exhibitions of this kind.

Entering the gallery you face a wide strip of paper that falls from ceiling to floor upon which is back projected (i.e. seen through the paper): Still, a film out of an airplane window showing its wing and the movement through the runway, then liftoff to cloud break. Moisture (that evokes tears) runs across the window glass. Viewable from the other side also, it sets the show’s moment as that of departure, rather than arrival. It sits nicely with the promotional image for the exhibition - Di Stefano’s father (presumably) eyeing the camera while the artist as toddler fingers a large toy plane nearby. Taken singularly it’s my least favourite work, but it nicely anchors the space in the middle of the installation.

To its left is a blown up old black and white image of the artist as young boy waving to the camera at an airport. He stands in what is presumably his father’s shadow, the photographer. The old photograph fades off on its right hand side into a cloud of white, again moving us along, like an action of takeoff up and into the space. In reality the fade out is the act of time damaging the photographic print. The image is propped up against the wall on the floor, as if taken down from the mantelpiece and left in a provisional in-between state.

In the next corner is projected a slowed frame-by-frame remnant of an old family colour super 8 film. Time is being meddled with. Again the artist is the subject. How should I behave standing before the camera, he seems to ask. The cameraman father responds, the boy smiles, and his hand comes to rest on the side of his stomach in a rather effeminate theatrical pose. He is stepping out from his father’s shadow. The camera moves in, his mother able to be picked out in the background. Here Di Stefano isolates and questions early evidence of his gayness. Is it nature or nurture? On the next wall, at similar head height to the boy is an old black and white image of his mother at a similar age in front of the ancestral home back in Italy, her pose, strong and proud, remarkably similar to that of the boy years later in Canada.

Across from here you can pick up headphones and listen to a stream of answerphone messages from that mother left for Di Stefano in New Zealand asking how he is. “Hi Johnny, I’m just calling to say hi and hope you are OK. Everything is fine…” The lack of reply by return is a charge here, and the repetition of language and phrasing between messages, almost musical. It has an element of comedy. Everything is always on the surface through archival record - cheery and OK. There is again a sense of familial contact being made through disconnected actions of saying hello and goodbye, in limbo, with little in-between.

As you listen you look to the left to black and white photographs above the work stations of the Enjoy gallery staff. One is a close-up portrait of mother and young son, the other of the son at a similar age on the telephone, grinning - it could be a Hollywood movie still.

Di Stefano’s project also contains a book of family images. With each of the different media here there’s strong thought as to how they sit in the gallery and how we as a viewer engage with them. That said I had a short attention span for the book as part of a show, and I longed for somewhere to sit down throughout the show to be with my thoughts. Is a bench too much to ask for?

The personal basis of the work is one of its strengths. Too often the play with history and photography in contemporary work holds the people in images at arm’s length as collected objects. In Di Stefano’s work here he is subject in a way that is as powerful in its questioning of identity through an exploitation of technology as a great painted self portrait like Velasquez’s Las Meninas.

Di Stefano is also waving goodbye to us in New Zealand in these works. Like his mother, I hope we get to see him again soon.