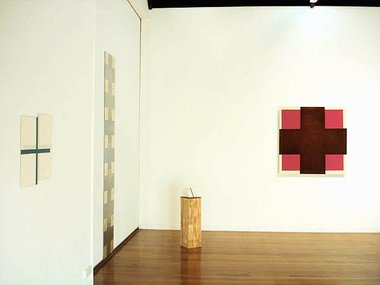 Seeking to reconcile the material and ephemeral may remain one of the weightier philosophical issues debated by humanity, but in its title and its work, 'You are Here' assumes that such speculation, (and its accompanying ironies, tensions and moments of resolution) is a given.

Stephen Bambury
You Are Here

There is a John Lennon song on one of his least treasured post-Beatles’ albums, ‘Mind Games’, titled You Are Here. Somewhat extravagant in its claims of affection for the songwriter’s partner, Yoko Ono, the sentimentality of its lyrics highlights the limitations of the written word’s fondness for paradox, failing to simultaneously reveal personal and more universal meaning. For the visual arts this has always seemed less problematic, no doubt because the relationship the viewer establishes with a work of art more immediately begins without words. Certainly, You Are Here, is the perfect title and introduction to Stephen Bambury’s current exhibition at the Jonathan Smart Gallery and a body of selected works from 1999 to 2011 that is as concerned with the matter and substance of materials in the here and now as it is with meditative and philosophical speculation.

After more than thirty years Bambury is familiarly known as that painter of minimalist abstract works that engage the viewer through an experience of colour, surface, material and form. However, typified by their subtle and iridescent surfaces, Bambury’s paintings also tend to complicate the process of looking by prompting an accompanying response from the gallery visitor of sensation and contemplation.

This transaction between the materiality of the art object and its potential for meditation and reflection is particularly relevant to this current exhibition. In their iconography, the paintings and sculptures in You are Here acknowledge the ambitions and imagination of European abstraction and the work of Kasimir Malevich, whose faith in the act of painting inspired a commitment to both the social concerns of the Russian worker and also to art’s potential for mysticism. Displayed in Jonathan Smart’s new gallery in the working class suburb of Linwood, You are Here could not have found a more appropriate location. Seeking to reconcile the material and ephemeral may remain one of the weightier philosophical issues debated by humanity, but in its title and its work, You are Here assumes that such speculation, (and its accompanying ironies, tensions and moments of resolution) is a given.

The ascending silver leaf and aluminium crosses imbedded with Bambury’s fingerprints in Ghost Ladder (III) 2006, acts as metaphorical stairway and evidence of the artist at work, recording the small detail of the process of transforming materials, while SCO89329 (2008), sits well-forward of the gallery wall, almost un-forgivingly imposing its physical presence upon the gallery visitor, yet reconciling its place between reality and aspiration through the formalism of its iconography and its richly evocative surfaces.

Siena (2007) is an amalgam of sensuous materials and surfaces determined through the symbol of the cross and an aesthetic conversation that is as autonomous and complete in its resolution of materials and form as it is connected to 2,000 years of Western art; Classicism, the Renaissance, European modernism and post-modernism, reaffirming, if it needs to be said, that abstraction in the 21st century is well and truly liberated from the shackles and limitations of a 20th century faith in the arts for radicalism and a predictable ideology of an “avant-garde.”

In You Are Here, Bambury presents a series of works that encourages a reconsideration of the place of his practice as well, not only in its association with broader traditions of Western art, but also by reminding the viewer of the generosity of pure abstraction and the way in which it continues to rediscover and reinvent itself, even after almost 100 years, ironically putting to rest any remaining perceptions of an art movement established on a premise of minimalism.