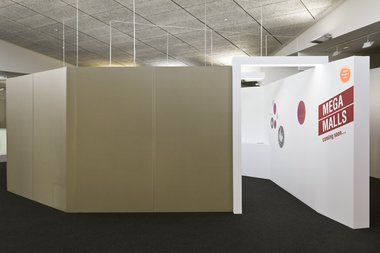 Most of these films or visual/aural documents were made in Asia, America, Britain or small New Zealand cities, but the overall implied thrust of the show is to provide a context for the supercity of Auckland and its assorted community disputes and problems.

Rapid Change is an exhibition that uses seven large works by various New Zealand and overseas artists to examine issues of urban planning, residential community needs and architectural function. Most of these films or visual/aural documents were made in Asia, America, Britain or small New Zealand cities, but the overall implied thrust of the show is to provide a context for the supercity of Auckland and its assorted community disputes and problems.

That is because just inside the double door entrance from Reeves Road Masters architecture graduate Elisapeta Heta has designed an enclosed display area, a walk-in sculpture that presents information about the spread of mega shopping malls and the community hostility that often results from their intrusive architecture and corporate expansionism. Although Auckland’s Sylvia Park and Westfield Albany do get mentioned, it is St. Lukes in Mt. Albert that is the focus of the project. We are shown videoed interviews with angry but articulate residents claiming council secrecy and arrogance, and conversations with Matthew Paetz, a planning manager at AECOM, commenting in detail on the various stages of appealing and consultative processes.

The information Heta provides here is obviously valuable but the sterile format of her presentation is unwelcoming. The white interior and unpainted cardboard exterior seem to be satirical but may not be - even though the inward facing orientation clearly is intended to be symbolic of a blinkered corporate/council mindset. As a portable visual environs with hanging lights and built-in seating it doesn’t entice you to linger. Despite the passion of the political content - the issues are alarming and deserve promotion - it is too icy and ugly a space to draw you in. You tolerate it for the sake of the interviews.

Literally icy is the documented treatment of a foreclosed house in Detroit, sprayed with water over thirty days during midwinter so it became caked with transparent ‘stalactites’. Matthew Radune and Gregory Holm are two American artists whose DVD and photographic project is visually magical - quite unforgettable in its fairytale ambience and lingering over delicate icicle formations. Yet the project is not really about fantasy, dealing with the grim realities of the economic collapse of Detroit with 20% of its residences being abandoned - due to the recession and withdrawal of core municipal services.

Attracting a lot of attention from locals with their extraordinarily looking ‘ice house’, the artists negotiated with the State of Michigan Bank for the building to be dismantled and recycled (not demolished). They also paid the back taxes on a second home to assist a solo mother and her family - being keen not to be exploitative visitors but politically committed and participatory.

Rufina Wu and Stefan Canham’s project involves the documentation of ‘shanty-town’ dwellings on the top of high rise buildings in Hong Kong, where the illegal residents are being removed by the council. At Te Tuhi two buildings only are being discussed. (Many others are examined in a published book). Building One has five rooftop huts of which three are documented; Building Two has thirty-five domestic units, and in the book eleven are documented. No names of any individuals are ever mentioned.

In these Portraits from Above, texts, photographs and orthogonal CAD drawings work together to give us detailed information about these Hong Kong dwellings. The pleasure lies in constantly comparing image details, or parts of drawings with text, imagining architectural linear configurations from opposing angles, through different doorways or other heights.

Utility Black, a split-screen film by Taranaki filmmaker Peter Wareing looks at the brutalities of being homeless in the East Village section of Manhattan, commenting on the greed of Wall Street developers and council removal of squatters. Wareing mixes acting and fictional narrative with his own documentation of police evictions, himself at home watching television or out cycling through the city, and scenes of Ground Zero. The subject matter gets too scattered and diverse to have any consistent focus but the two juxtaposed screens provide a good dynamic for repeated imagery. The pairing off keeps the action lively - despite the muddle.

Anu Pennanen is a Finnish artist whose colour film of the changing inner city of Liverpool deals with the central business district and the replacement of old historic buildings with commercial office block and malls. There are some nice shots of workers looking out of windows at the changing skyline but overall this carefully assembled film seems too predictable. As docos go it is dull - often relying on spoken word that is repeated and confusingly layered in the aural mix and divided up to appear as a floating streaming text.

Aucklander Dieneke Jansen has contributed a huge wall-sized billboard print of the McLennan development, where a military camp was cleared away at Papakura to make room for state housing and residential properties. This however later stalled due to a funding crisis. 1:1 in scale the massive photo spills over onto the floor so Te Tuhi visitors will feel they are in an abandoned section of regenerated parkland.

Made of 343 images seamlessly blended, Jansen’s 8 metres wide panorama has exceptionally high acuity, unlike the pixilation and octagonal optical patterning of most hoardings. At its base on the right is a grey rectangle inserted to assist tonal matching and also to allude to the floor plan of an absent removed building - or another dreamed -of one to come.

Last year I reviewed a Reuben Moss show at Gambia Castle that included a radio program he made about the Naenae community development (containing New Zealand’s first pedestrian mall) during the first Labour Government. He presents it again in a small dimly lit room at Te Tuhi, and also online here.

The Parade of the Old New works best when you can sit down at home with a hot coffee and concentrate on it in sections, for it is nearly ninety minutes long. Unfortunately the musical background by Stuart Porter is poorly mixed, often drowning out the interviews, and the sound quality for some interviewees, especially the immensely informative Linda Tyler, is appalling. Plus the overall account is unwieldy in length. It should have been condensed and shaped better.

Yet despite these criticisms Moss has researched and written a good story that extremely relevant to today’s situation where the wealthy and powerful seem so indifferent to the plight of the needy. It involves the utopian design of modernist pioneer architect Ernst Plischke, a passion for co-operative retailing by progressive thinker William Robertson and (at times) the innovative researcher of community health centres, Douglas Robb, and how their dream of a radical approach to community facilities was in 1946 thwarted at the last minute by Walter Nash, then MP for Lower Hutt. Public housing for Returned Servicemen was a higher government priority.

Bruce E. Phillips’ show about our urban planning is tightly put together with its various interlocking components, and the take away notes on each contribution are excellent. There is also a reading table with three screens, showing two related blogs and as a bonus, General Motors’ 1939 New York World’s Fair paean to utopian technology, To New Horizons - a reminder of how in those days the earth’s resources seemed limitless.

However in this exhibition some works are much more successful than others. They make you want to return soon to get more information or their sensual aspects continually fascinate. Others though lack sparkle. They seem lifeless. So over all: a mixed bag.