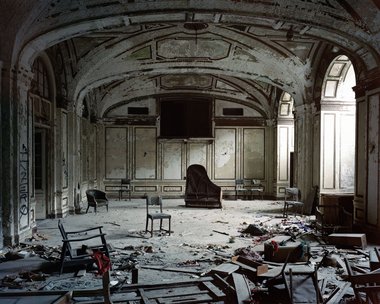 There is a haunting strangeness to this desolate beauty of forlorn, disintegrating architecture - but it is not sufficiently compelling that you'd want to be there in person. Though it has resulted from economic neglect - not warfare or natural disaster - and people without jobs moving away, these sites exude danger and you feel vulnerable.

German photographer, now Auckland resident, Frank Schwere presents nine large images documenting the crumbling dilapidated buildings of Detroit - his shots framed but unglazed, in the downstairs Two Rooms gallery. With the Motor City’s past industrial glories long gone, the automobile industry collapsed in the face of the recession and Japanese competition, and the Tamla Motown music industry long evaporated too, these uninhabited collapsing ruins remind me of Andrei Tarkovsky’s films famous Nostalgia and Stalker, but without the water cascading from decrepit ornate ceilings.

We see six sagging interiors and three outdoor window-shattered vistas with classic camera-friendly grey skies. In all of them, the normally garish colour sprayed on by visiting taggers now looks intricate and soft because of the ubiquitous ashen greys and faded browns dominating most walls and asphalt paths. The snatches of complexly jumbled rainbow flurry appears placed with extra fine precision amongst the strewn rubble, dangling wiring, dismantled furniture, smashed pipes and peeling paper. Each frontally organised image has a finely detailed acuity overall regardless of the subject’s proximity - the result of a ten minute exposure taken at head height from a large format camera. The density of that detail seen under natural light is staggering, as is the impact of culture collapsing under the onslaught of nature.

There is a haunting strangeness to this desolate beauty of forlorn, disintegrating architecture - but it is not so compelling that you’d want to be there in person. Though it has resulted from economic neglect - not warfare or natural disaster - and people without jobs moving away, these sites exude danger (even when mediated as gorgeous photographs) and you feel vulnerable.

And though Schwere works within the genre of New Objectivity, his images are never clinical. There are many photographers working that way now - especially in Germany - yet the results from those conventions (and later methods derived from ‘conceptualists’ Bern and Hilla Becher such as frontality) still have the power to move. Even as clinical documentation they remain emotional. The formal properties added to the pathos of his decaying content, stir Schwere’s viewer.

Of the show’s selection, the two church interiors with sooty arabesque railings, arching ceilings and organic undulating balconies seem particularly tragic - especially if you start fantasising how they might look renovated and filled with worshipers and music. Yet such images (if photographed) of repaired architecture would not work. They would induce some wonder at the achievement for sure, like these post-wall images of restored German houses (before and after) by Stefan Koppelkamm, but they would not disturb or deeply intrigue. The opposing forces of destruction and entropy have their own appeal, expressing perhaps a fundamental truth paralleling what we experience with our own bodies. Something basic that we cannot but recognise.