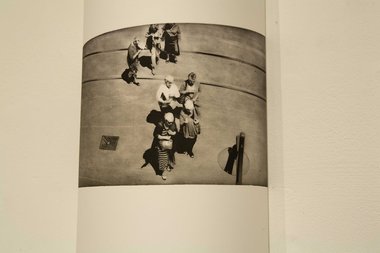 'nth degree' invites comparison with the recent 'Deconstruction / Reconstruction' exhibition curated by Simon Ogden at the Bath Street Gallery in April which included five of the nine participating Masters candidates in this current show. Featuring work across a range of disciplines it is an elegant exhibition with a single work judiciously sited from each artist.

nth degree brings together the work of nine Masters students from the University of Canterbury School of Fine Arts and presents them in the SFA Campus Gallery at Ilam - transferred from the programme of SoFA Gallery in the Arts Centre, which was damaged by the earthquake. Featuring work across a range of disciplines it is an elegant exhibition with a single work from each artist judiciously sited to encourage potential relationships with adjacent works. nth degree looks just right and as a bonus includes one or two ‘stop-you-in-your-tracks’ highlights.

Tjalling de Vries, You sure are ugly but you sure can dance is the exhibition’s brightest luminary. A painting about painting out painting, constructed through layers of acutely ambiguous and animated, shifting spatial relationships, de Vries consumes and demolishes the comic book/tattoo irony of artists like Sam Mitchell, convincingly argues that Gerhard Richter’s expressionist paintings took themselves far too seriously and through the act of erasure, removal and elimination, assembles a work about bliss and affirmation.

In its fragmented glimpses of shifting realities, de Vries’ work is ideally placed alongside Bianca van Leeuwen’s Manifold Locus, a series of pin-hole camera photographs of the Canterbury landscape. Like de Vries, van Leeuwen demonstrates an equal respect and disregard for the traditions and subjects that she references. To describe these as a reconsideration of regionalism and the work of artists such as Rita Angus and W. A. Sutton doesn’t do them justice. Van Leeuwen’s art appropriates regionalism in a way that suggests how Rita Angus might have seen Cass if she had been the Blair Witch. All seven images frame a landscape that makes tangible the ‘otherness’ of humanity confronted with the reality of an inherent alienation from nature and loss of a metaphorical Garden of Eden.

Van Leeuwen’s Manifold Locus draws attention to a number of aspects of nth degree as an exhibition described as bringing together work by a group of artists whose practice demonstrates ‘a fascination with process, a meticulous attention to detail and a compulsive approach to the art of making.’ Van Leeuwen’s may be a consummate performance of such virtues, but the relationships her work establishes with its audience transcends the thinking and making that accompanied its realisation. The demands of unifying ideologies and intentions between individuals in a survey show such as this is no easy task and the attention given to process, detail and compulsion tells some, but not all of the story or potential of these works. Indeed, only one of the participating artists fulfils the demands of this prescription. Julie Ross’ Thoughtfull 1-4 plays a word game with its title against two diptych portraits of the artist, facing one another with literally, a head full of thoughts. It’s a work that positions philosophical debate at the centre of attention, yet interest ultimately resides in the consideration this work give to materials and processes.

In contrast, it is the restraint of Paul McLachlan’s pseudo-documentary, photo-intaglio prints in Passage that most charms and impresses with their deceptively effortless and stylish iconography, while Jane Bowman and Alison Staniland’s contributions recognise the artifice of their performance as works of art in a gallery space, and defined as such through their framing and containment these works argue for the virtues of pure aesthetic experience. Staniland’s Animal, Mineral, Flora I in particular, is a work that takes flight, almost literally, from the constraints of an interest in classifying and categorising small, found photographs of species of plant and animal. Suspended in the gallery space it appears liberated from the burden of too many potential narratives.

nth degree also invites comparison with the recent Deconstruction / Reconstruction exhibition curated by Simon Ogden at the Bath Street Gallery in April which featured five of the nine participating artists in this current show. It is unfortunate that Nicole Bourke, whose work was included in both exhibitions, missed an opportunity to exhibit her biomorphic polystyrene sculptures in nth degree. The inclusion of a series of multi-media drawings, Lies on the Surface does not fully represent the best aspects of her work. These images seem worthy rather than witty, playful or ironic when placed in the context of Mark Braunius’ consideration of biology through a microscope. Equally disappointing is Nathan Pohio’s Untitled, a digitally split photographic portrait of three images of the same figure in the persona of Buster Keaton, in which, maybe for the first time ever in art, the eyes really do have the potential to follow you around the room. In the context of previous work by the artist, Untitled seems more like a work in progress.

The absence of Katie Thomas from the Bath Street exhibition however, was Auckland’s loss. (Ed. She has been in other group shows in Bath St.). Thomas’ Lifted is a painting by an artist whose love of materials and the act of painting is written all over the experience of being in the same room with her work. Layering paint in circular rhythms and loops that seem to glow and pulsate on, and within the surface of the picture plane, Thomas makes images that transfix. It’s an experience, almost of the highest level, between the artist, their work and the gallery visitor. Now that’s an nth degree encounter.